Where to Watch the Phillies in the Playoffs (Besides Your Couch)

Philly bars where you can bank on being surrounded by other fans who are just as excited/anxious as you are. 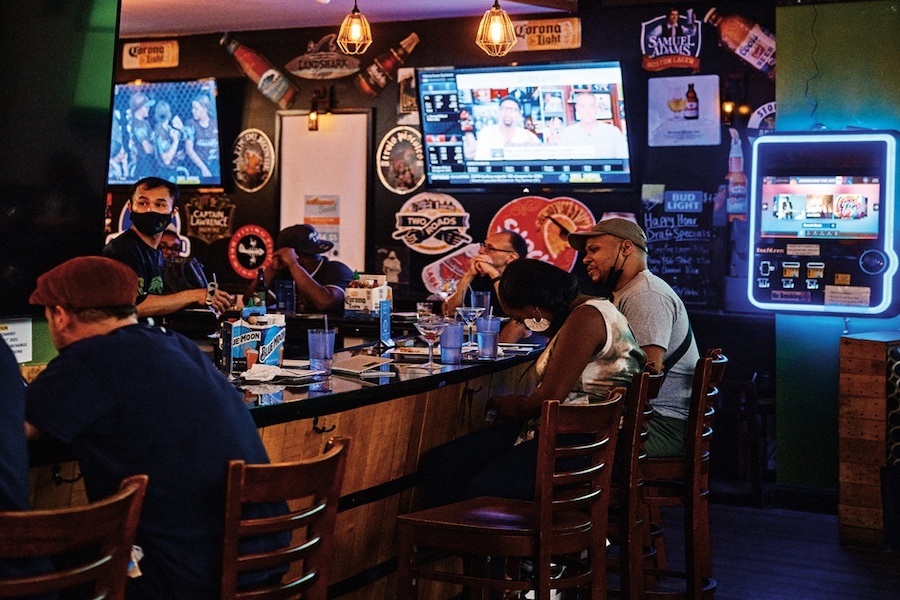 Bar-Ly Chinatown is one of the bars dutifully showing Phillies playoff games this year. / Photograph by Ted Nghiem

The simple truth is that every Philadelphia bar with a TV morphs into a Phillies bar during Red October. Come to think of it, practically any corner deli where some guy behind the counter is streaming the game on his Android morphs into a sports bar, too. But that’s probably not where you want to watch the Phillies in the playoffs. Instead, try these bars where you can bank on being surrounded by other fans who are just as excited/anxious as you are (and who also didn’t buy tickets to the game).

Founding Fathers, Grad Hospital
TVs galore, $4 beer and $6 mozz sticks during weekday happy hour (which runs from 4 p.m. to 6 p.m.), and multiple people you knew back in college and don’t keep in touch with anymore, probably. Arrive early to grab seats or prepare to stand for nine innings. 1612 South Street.

Chickie’s & Pete’s, South Philly
Emotionally speaking, watching the Phils at Chickie’s & Pete’s on Packer Avenue while nervously housing an order of Crabfries is as close as you can get to the ballgame without actually attending. Also, if you want to ensure a spot on game day, you can reserve a table ahead of time through the website. 1526 Packer Avenue.

Bar-Ly Chinatown, Chinatown
Bar-Ly has more TVs in their bar than the Phillies have players on their roster. Which is to say that you’ll have ample opportunity to clock what’s happening on screen. Plus, no where else on this list serves a lycheetini and it’s crucial you’re aware of your options so you can make responsible decisions for the sake of the Phillies. 101 North 11th Street.

Ray’s Happy Birthday Bar, East Passyunk
Ray’s is by no means a classic sports bar, but it’s a classic Philly bar that’s infamous for Friday night karaoke and having FUN with capital letters. They’ve been showing playoff games for everyone who appreciates kitsch, dives and athletics in equal parts. 1200 East Passyunk Avenue.

Paulie Gee’s Soul City Slice Shop, Midtown Village
If you want to eat pizza while you watch the game, you can probably scrounge up some floppy cheese disc at a sports bar near you. But if you want to eat delicious pizza while you watch the game, no better option exists. Saddle up to the bar at this new slice shop and order the thick Hellboy square or the thin-crusted, garlic-heavy Mootz, plus whatever beer deal they’re offering for the game. 412 South 13th Street.

McGillin’s Olde Ale House, Midtown Village
McGillin’s is showing all of the Phillies playoff games in high definition on projector screens, which is probably not what Ma and Pa McGillin intended for the place when they opened it in 1860 but is exciting for fans nonetheless. Also, there’s allegedly free wi-fi in here in case you’re “working” “remotely” during a day game. 1310 Drury Street.

Misconduct Tavern, multiple locations
All three locations of this sports bar reliably show playoff games, and they all pretty much serve the same menu of drinks and bar food. Though, for what it’s worth, the University City location has the cheapest beer buckets of the three.