Plus, Kouklet started selling sonhos on Thursdays, and MANNA's annual Guac Off returns on May 26th. 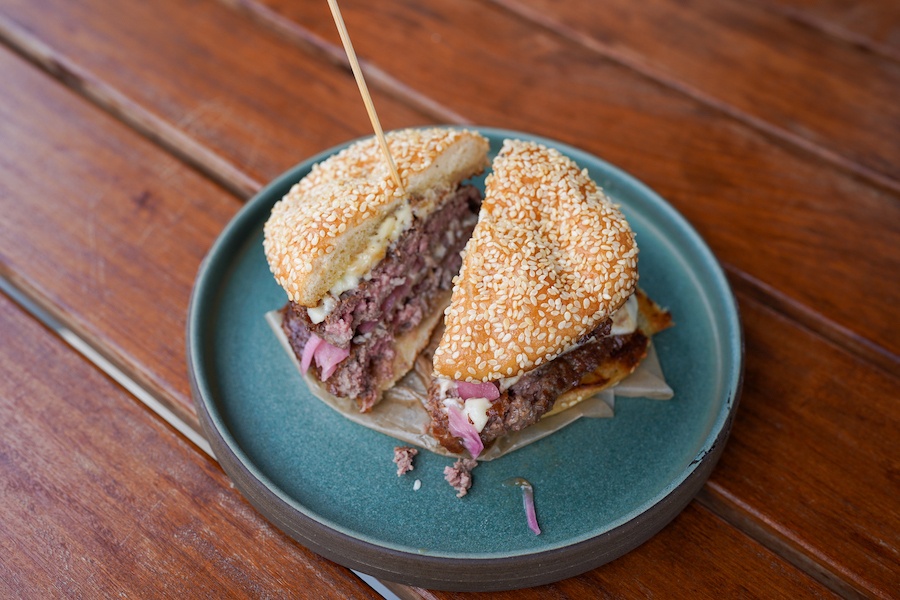 Handrolls, the Mother Rucker burger, and more a la carte snacks to try at River Twice

Over at River Twice in East Passyunk, chef Randy Rucker is changing things up for summer.

Since last September, the upscale American restaurant has operated only as a tasting-menu experience. But now River Twice is introducing a “Grazing Menu.” Available Thursday through Sunday nights in the restaurant’s outdoor seating area, this is a selection of a la carte dishes for those who might just be looking for a snack while strolling East Passyunk; or a meal for someone who doesn’t want to commit to the whole $120 tasting menu.

Rucker will be offering a few stellar options to grazers, including soft shell crabs with koji butter and caviar, oysters with trout roe, handrolls, and his double-patty “Mother Rucker” burger (which originally started as an off-menu item served in limited quantities and makes it way onto pop-up menus every now and again). There’ll be more a la carte items added as this moves forward. You can always make reservations for the grazing menu, but really, this is designed for walk-ins. So if you happen to be wandering by, you know what to do.

Guac for a good cause

MANNA’s eighth annual Guac Off is scheduled for Thursday, May 26th at Morgan’s Pier. There’ll be a dozen-odd contestants from some of the best restaurants in the city, all showing off their best guacamole recipes, which you’ll get to sample while helping to crown the 2022 Guac Master.

Tickets to the event are $40 ($75 for VIP) and proceeds will go to support the Metropolitan Area Neighborhood Nutrition Alliance and their work bringing healthy food to those battling life-threatening illness.

So you get to do some good AND get to eat a bunch of guacamole. That’s a win-win. More details here.

Every single weekend, when the crew at Kouklet start selling their cream-filled sonhos “dream” doughnuts, they sell out. People call, they line up, they do everything they can — but it doesn’t matter. The sonhos always go quickly.

So Kouklet owner Mardhory Santos-Cepeda is trying to do something to appease the masses. For the foreseeable future, she’s adding an extra day of doughnut service. Every Thursday, starting at 8 a.m., she’ll be making an additional 100 sonhos available for purchase in four flavors: vanilla, double chocolate, sesame, and strawberry.

Santos-Cepeda isn’t taking pre-orders, but she is limiting purchases to a maximum of six doughnuts per customer. And while they’ll probably still sell out, this additional service will at least give people a fighting chance to get their hands on some of these Brazilian “dream cream donuts” the East Passyunk neighbors are going so nuts over.

Thursday service starts this week. You might want to start lining up now.

Assembly Rooftop rebrands for the summer

The Logan Hotel’s rooftop lounge, Assembly, is going wild this summer with the launch of “The Grove at Assembly.” Starting May 24th, you’ll be able to hang out above the city in a space going heavy on island vibes and plant life.

The menu is also being revamped into a seafood-focused board that includes tuna poke, lobster rolls, octopus salad and halibut aguachile. There’s a whole new list of tropical cocktails, margaritas, and frosé, plus a new oyster and prosecco bar.

Reservations are available. Walk-ins are welcome. There’s a $10 cover per person, so keep that in mind when making you’re plans. But if you’re looking for an island-ish scene in the middle of the city this summer (or maybe a rooftop to hang out on until 1 a.m. on weekends), this might be just what you’re looking for.

And if you’re in the business of finding more places to eat and drink outside, check out our guide here.