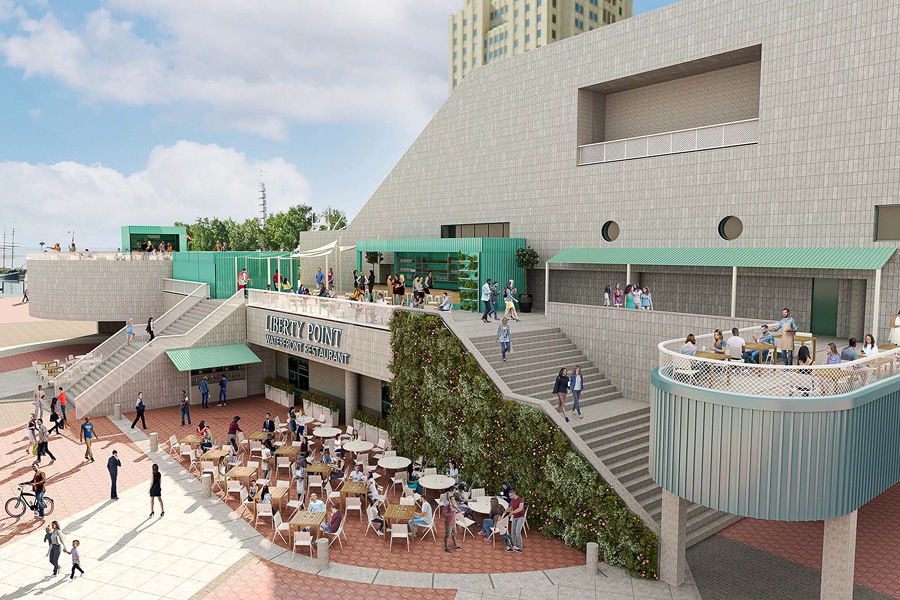 Happy Valentine’s Day, buckaroos, and welcome to the Foobooz Monday News Round-Up. I have a whole bunch of fresh, hot news for you today — including a classic restaurant makeover in University City, the local purchase of a historic liquor brand, and the import of a famous burger operation from out west. (No, not that one.) But let’s start off this week with something big. 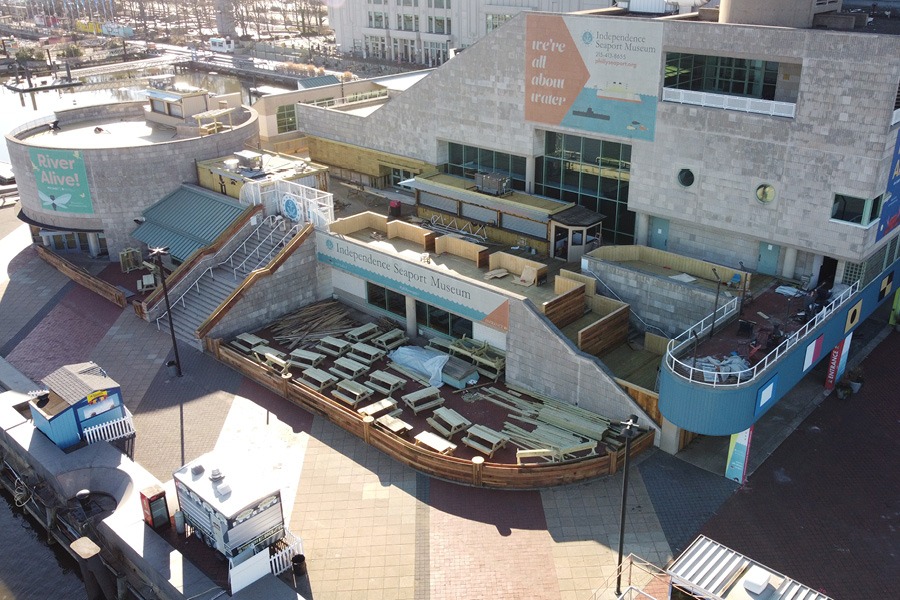 Avram Hornik and FCM Hospitality already had the record for opening the largest restaurant in the city when they debuted Craft Hall, with its seating for 500 (not counting patio tables or the additional dog park that came later). Now, they’re looking to top that in a big way with Liberty Point — a nearly 30,000-square-foot, multi-function bar, restaurant and entertainment venue with three levels, five bars, indoor/outdoor seating, waterfront views and seating for 1,400.

Hornik and FCM have been working on it for five years now. It was supposed to open in 2021, but the pandemic put the brakes on. Now, they’re looking at an April opening — just in time for spring. So let’s check out some details.

First, it’s located at 211 South Columbus Boulevard — that’s right next door to the Independence Seaport Museum. As a matter of fact, Liberty Point is basically hugging the museum, using some of that dock space that’s right there and piggybacking on its waterfront scenery. And while this new project doesn’t really give Hornik a total lock on the waterfront (there are other operators in and around Penn’s Landing), it does give him another really solid anchor. With Craft Hall on one end, Liberty Point on the other, and things like Morgan’s Pier, River Beer Garden and the Cherry Street Pier in between, he has absolutely marked his territory. If you’re in the neighborhood, feeling boozy or looking for a sandwich, odds are pretty good you’re going to be putting money in his pocket.

The space itself is going to be massive. There’ll be a permanent stage set up in the center of it, with plans for live music on the weekends and DJs on Thursdays and Sundays, 25,000 square feet of outdoor seating, landscaped greenery to cover all the concrete, multiple levels, all kinds of seating options and all kinds of views with five different bars to choose from: the main bar, the stage bar, the inside bar, the boat bar (intriguing) and the sky bar — an elevated space on the top level. Inside, there’ll be vintage mirrors, TVs and a completely re-made space. FCM is even looking at partnering with the museum for excursions out onto the water, which, by my calculations, will give him command of the land, sky AND sea. Well, the river anyway.

The menu looks to be casual — sandwiches, salads and snacks at lunch and dinner — with a raw bar and late-night specials. The first level of Liberty Point will be family- and dog-friendly. Right now, they’re looking at being open seven days a week, from noon to 2 a.m., but that might change. Lots of this stuff might change. But I’m just letting you know what I know right now.

But seriously? April is right around the corner. So I guess we’ll all know a lot more about this place soon enough.

We’ve got a theme going here, so I’m sticking with it.

You folks know Faber liquors, right? I mean, if you were ever a teenager, ever had a drinky uncle, ever frequented sports bars or dive bars or places that don’t brag about what they keep in their wells, you know Faber. If you ever found yourself in need of a cheap bottle of pomegranate vodka, you know Faber. If you ever had the opportunity to visit the old Foobooz World HQ offices, you probably also know Faber — it was the brand of choice for day-drinking back when Art and I were running the show.

Anyway, Faber was produced by Bucks County distiller Midnight Madness (SUCH an appropriate name). But Midnight Madness has been in the midst of a messy bankruptcy for quite some time, and Philly’s New Liberty Distillery has been eyeing the company hungrily since last summer.

See, Midnight Madness still had some assets — most notably, their actual physical site, two high-speed bottling lines and some distilling equipment (totally not haunted by the ghosts of Faber’s grape-flavored vodka, I’m sure). And Millstone Spirits Group (a.k.a. New Liberty), which is in an expansion kind of mood, wanted those things in order to speed their growth.

So in a recent bankruptcy auction, they got ’em — for a cool $1.4 million. And along with the space and equipment came some intellectual property, including the Faber name and brand. Which is cool because New Liberty says they have plans to re-launch the brand in the future.

Probably without the grape vodka though.

Another Week, Another Starr Update

It seems like every week, I come back to this column with more Stephen Starr news. Which is weird, because for YEARS, his attentions were focused elsewhere — on properties in New York, Florida, the moon, wherever — with hardly any action here in his hometown.

But these days? All Starr, all the time. He’s cutting huge national deals, going big on sports betting, opening his own bookstore (and Mexican restaurant) in Fishtown. And now, he’s remaking one of his most iconic, early restaurants — Pod — into something new.

Pod (now known as Kpod) was always an odd duck. It was a kinda blobby, future-y, fusion-y joint in UCity that always kinda felt like what science fiction creatives in the ’70s thought futuristic dining would look like in 1997. It was cool in that it was entirely unique. There was no real way to describe it. It just … was.

And now, Starr has re-made it — turning the kitchen over to his guy Peter Serpico, who has given the entire place a Korean vibe while maintaining its shiny, bright and curvy aesthetic.

The menu is full of mandu dumplings and hand rolls, banchan and army stew with hot dogs. There’s pork ramyun, kimchi fried rice with egg and soft tofu stew. The drinks list is huge. The small plates menu looks awesome. (Honey butter fries with chili flake? Come on.) And I’m really excited to see what Serpico can do here.

Kpod opened quietly a few days ago and is serving right now. I’ll see y’all there.

Wanna know how long I’ve been doing this job and how old I feel right now? I was working in Denver when Smashburger opened their first burger restaurant. I went there. I took a tour. I believe I ate one of the first burgers it produced, sitting down with the founder, Tom Ryan. This was in 2007.

Smashburger now has almost 400 locations in 37 states and nine different countries. And the newest one is opening in Montgomery County on Friday, February 18th, at 2023 Welsh Road in Dresher. 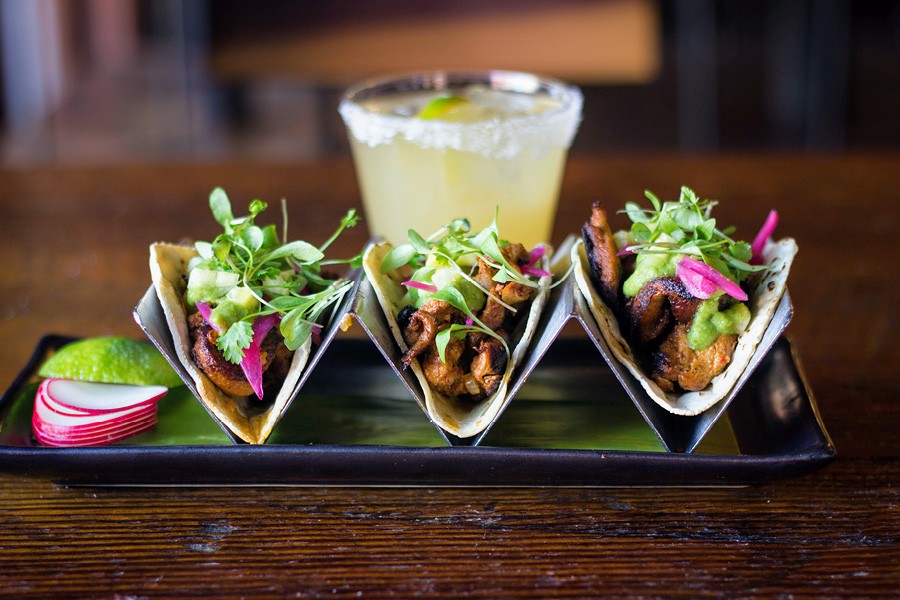 Up in Northern Liberties, Añejo Philly is doing a $25 bottomless Taco Tuesday deal. There are eight varieties — everything from lamb barbacoa to Gulf shrimp, and crispy cauliflower or wild mushroom for the vegetarians — and you can mix and match. The price includes all the tacos you can handle, rice and beans, and chips and salsa. Discounted margaritas and small plates can be added on. At the preview event, 250 people ate more than a thousand tacos before the kitchen stopped counting, so this is probably going to be a big deal.

This is happening every Tuesday from 5 to 9 p.m. If you’re down, you can find more information right here.

And hey, speaking of margaritas, Tuesday, February 22nd is National Margarita Day. So I’m just saying, if you’re looking for an excuse …