Driving Route 49 to the Shore: Where to Stop for Foot-Long Dogs and a “Belly Buster” Burger

Seemingly untouched by time or history or, really, development of any kind, this is a country road preserved, with idyllic views of farmland and saltwater marshes and some superior crab shacks along the way. 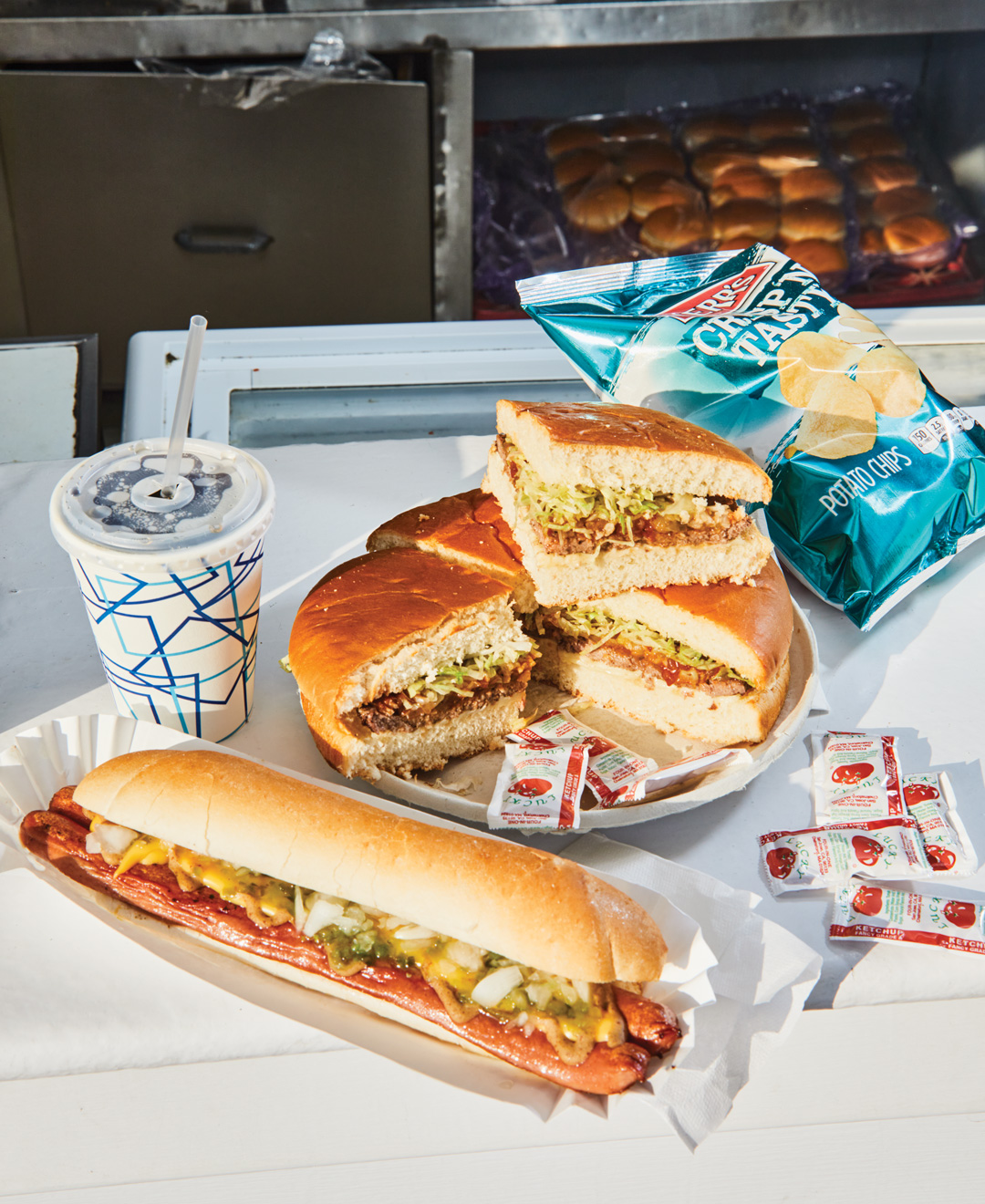 A hot dog and the Belly Buster from Hudock’s Custard Stand in Salem. Photograph by Michael Persico

Seemingly untouched by time or history or, really, development of any kind, Route 49 is a country road preserved, with idyllic views of farmland and saltwater marshes and some superior crab shacks along the way.

The Zoagies truck in Pennsville, parked near a Sunoco station parking lot, serves its namesake “zoagies,” which are a cross between a po’ boy and a hoagie and the genius creation of Ezell Barnes. Barnes is an ebullient character put on earth to spread cheer, to speak his specific brand of “Zenglish,” and to load people up with fried, saucy fish sandwiches built on — sit down for this — deep-fried rolls. Get the Zoch Ness Monster, an absolute beast of a fried sandwich overflowing with shrimp (zhrimp), crab (zrab), fish (zish), and zobster (you get it). 693 South Broadway, Pennsville. 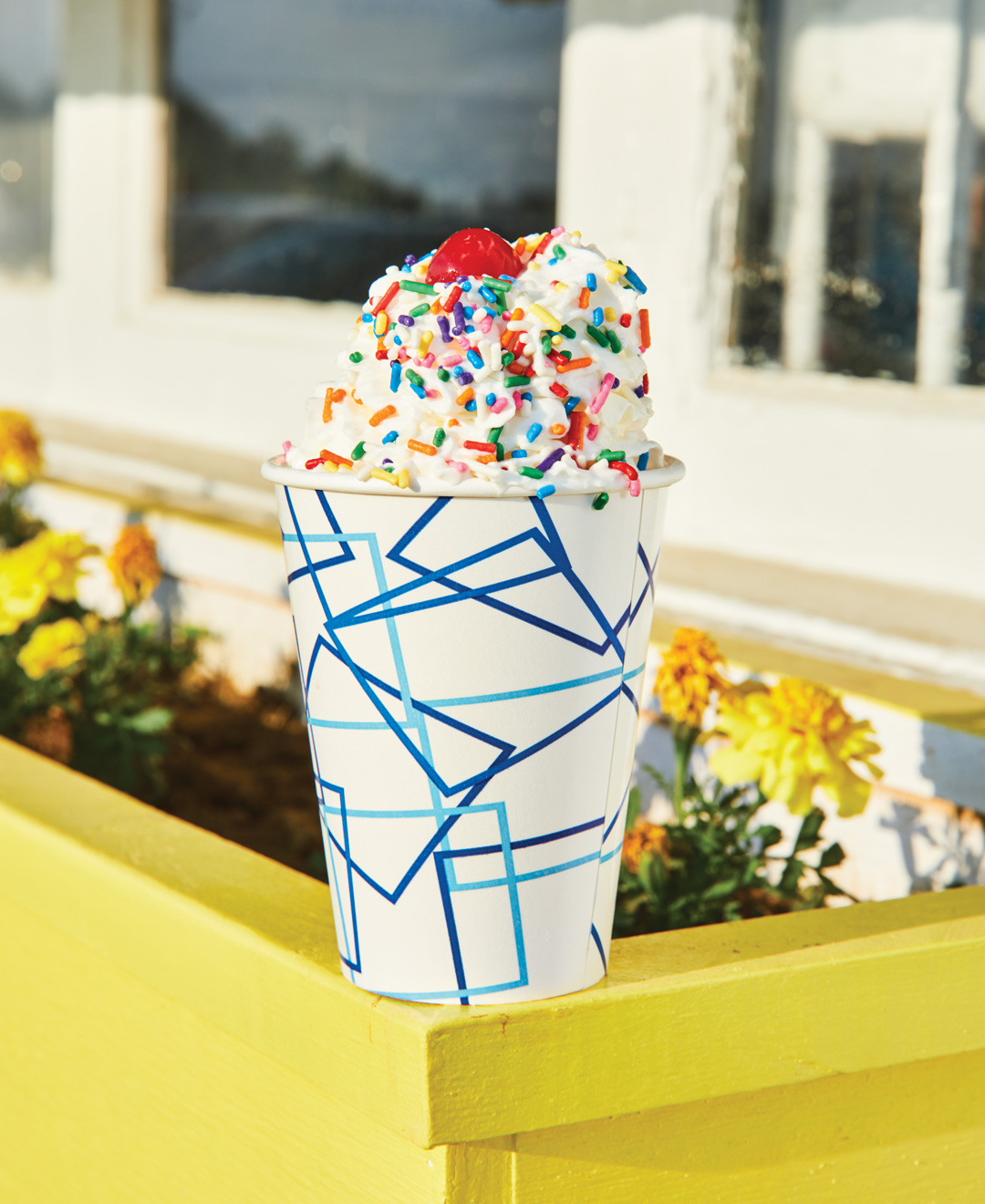 Hudock’s (est. 1967) has two buildings separated by a small gravel parking lot. One shack is for the sweet stuff, mainly ice cream, be it in a cone, shake, blizzard, sundae or soda. The other is for savory specialties like corn fritters, hoagies, foot-long hot dogs and, most importantly, the “Belly Buster” — a single gigantic hamburger the size of a dinner plate, cut into quarters, family-style. 544 Salem Quinton Road, Salem. 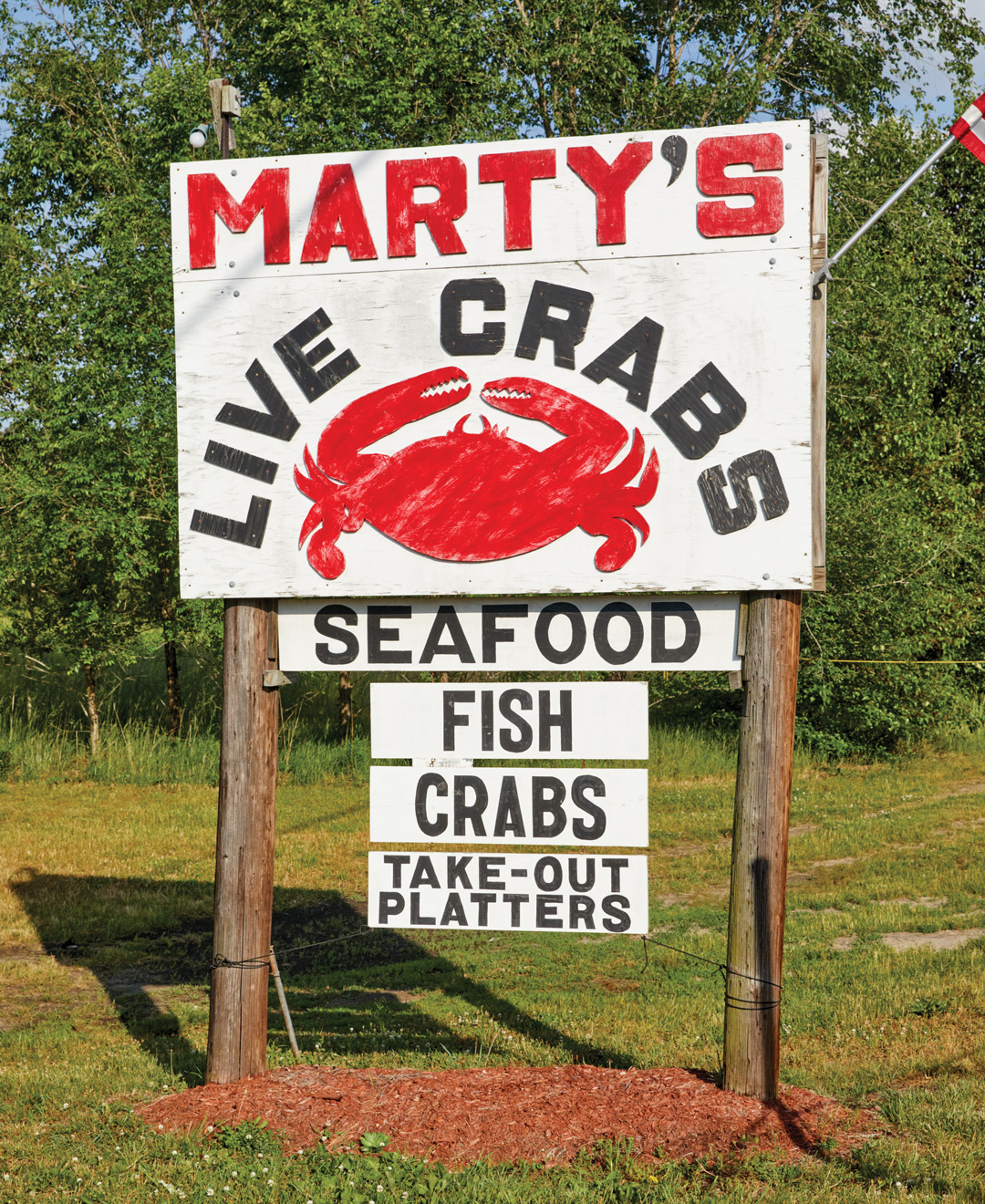 There’s nothing for miles and miles and miles — just trees and farms and fields — until all of a sudden, there’s Marty’s, a red shack boasting seafood, crabs and fish. Live crabs are the specialty, cooked and cleaned on the premises, served like chicken wings in a variety of sauces (Old Bay, garlic, mild, hot and fire-hot). You’d be silly not to order the fried stuff: scallop and shrimp baskets, big slabs of crusty whiting, crispy black olives served with house ranch. And you’d be smart to bring a cooler of icy beer with you. 474 State Route 49, Bridgeton. 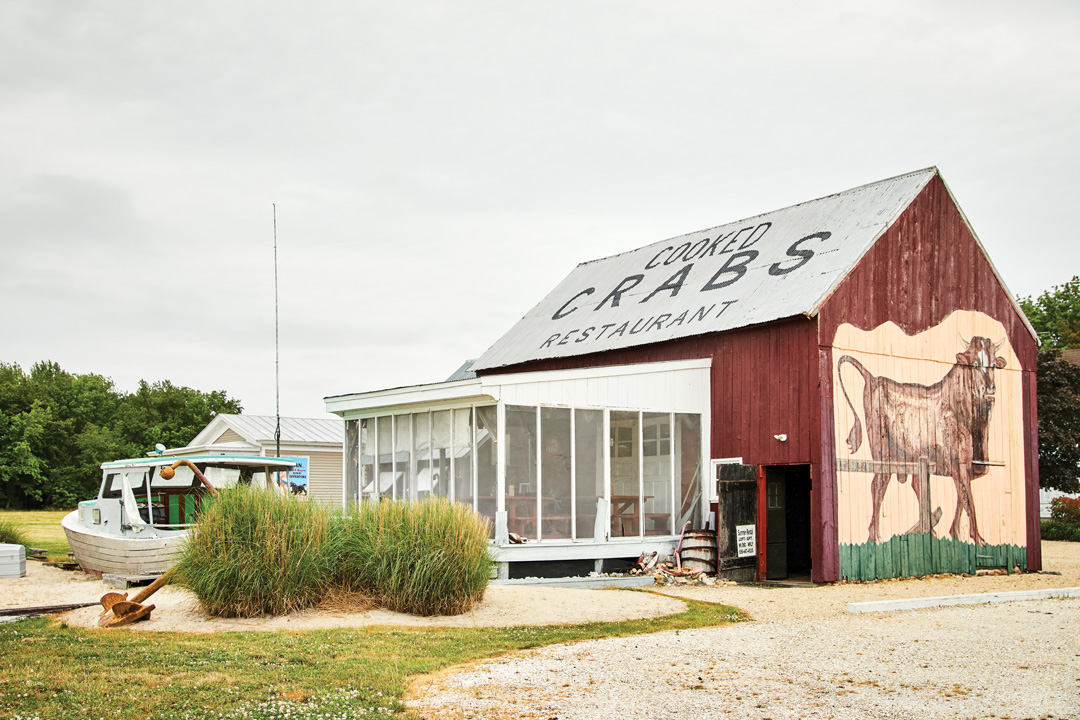 Bull on the Barn in Newport. Photograph by Michael Persico 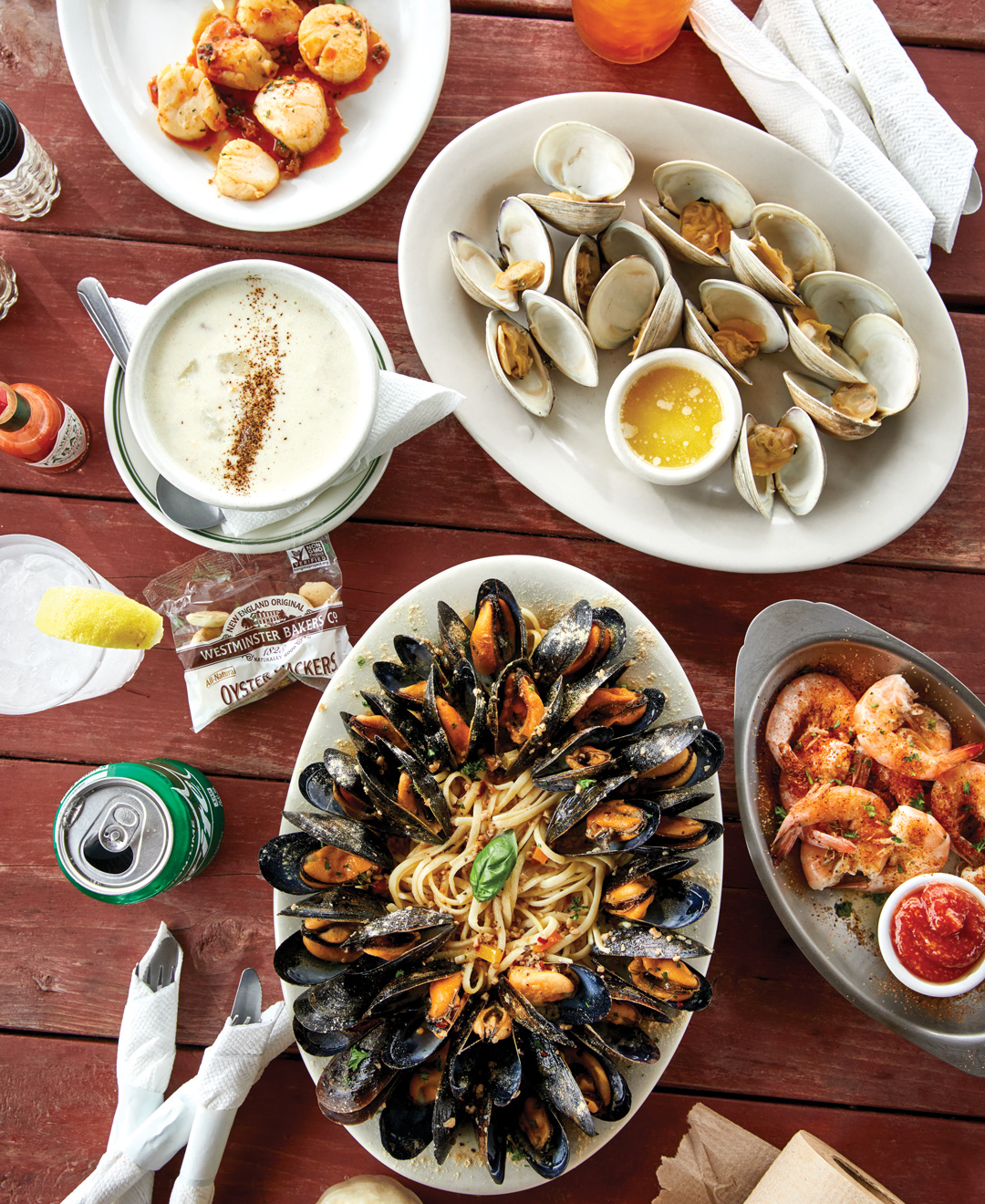 A seafood spread at Bull on the Barn in Newport. Photograph by Michael Persico

Bull on the Barn

There are five things to know about Bull on the Barn before you go: ❶ It’s actually called the Bayshore Crab House, but locals call it the Bull on the Barn because … ❷ The restaurant is housed in an old barn that’s decorated with a giant mural of a bull. ❸ It’s literally on a road called “Back Road.” You’ll lose cell service when you arrive. Both of these things make the experience better. ❹ Kevin Lore, the chef and owner, comes from a long line of oystermen, so he lives and breathes the seafood he serves. ❺ The crabs are prepared “South Jersey-style” (meaning they’re cleaned, then seasoned and cooked, vs. Maryland-­style, which is seasoned, steamed, and then cleaned), the scallops come from Cape May, and the oysters and clams come from the Delaware Bay. When it can be sourced locally, it is. 100 Back Road, Newport. 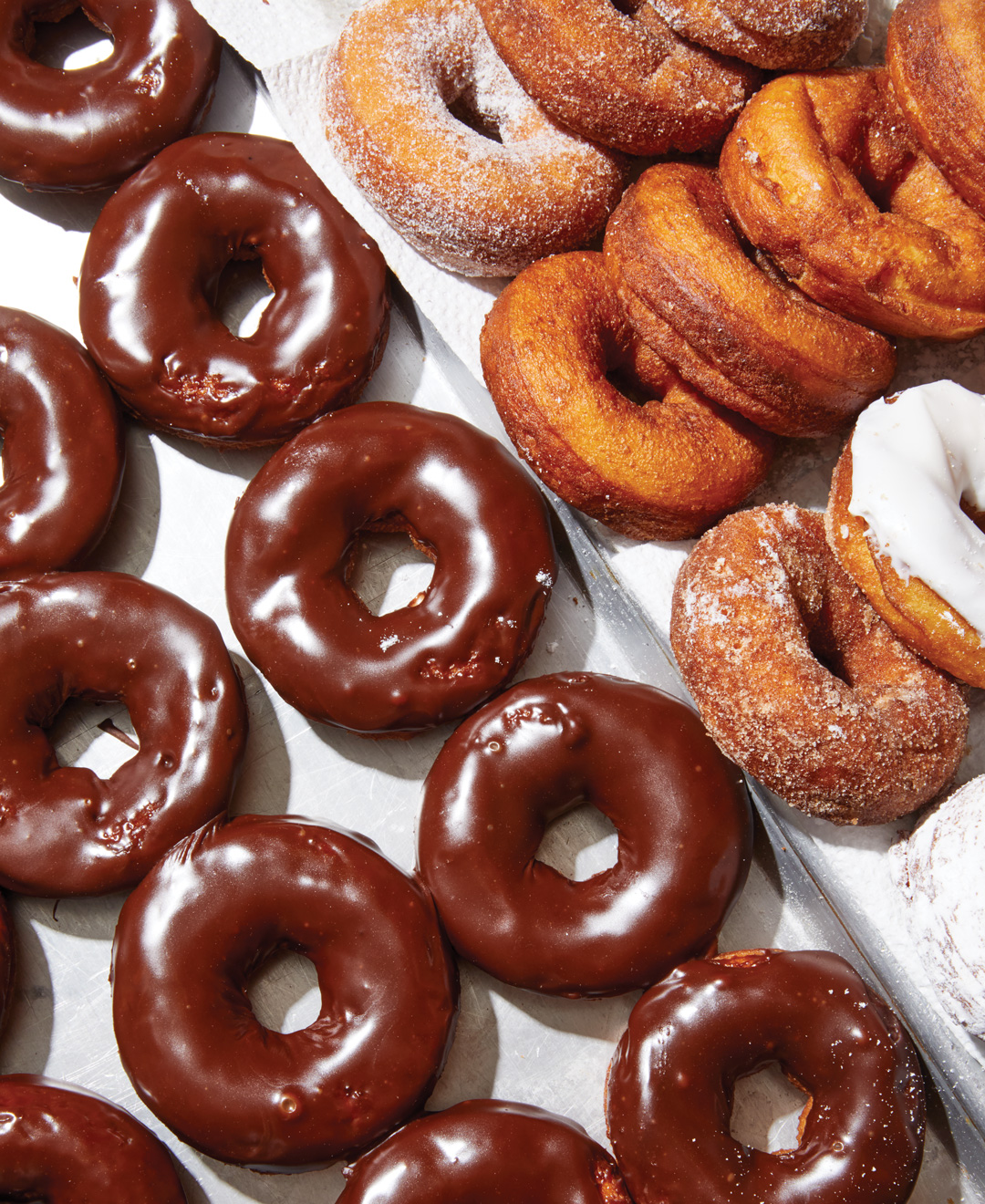 Cakey doughnuts, crumbly muffins, cheesecakes, loaves, and what are, without a doubt, the sweetest, stickiest honey buns in the state. Maybe on the planet. 140 State Route 50, Ocean View.

The Deauville Inn, in Avalon’s neighboring Strathmere, isn’t new (it dates back to the 1800s), but with a change of hands, new chefs and a major reno, it’s a Deauville Inn for 2021, with local Jersey oysters on the half, giant seafood towers, roasted hen-of-the-woods mushrooms, fried whole snapper, and — we kid you not — osetra caviar service. And yes, Deauville fans, the twirlin’ potato is still there, and still great with a beer. 201 Willard Road, Strathmere.

Published as “Route 49” in the “On the Way to Cape May” guide in the July 2021 issue of Philadelphia magazine.