Good thing we're about to get some more of them this summer. 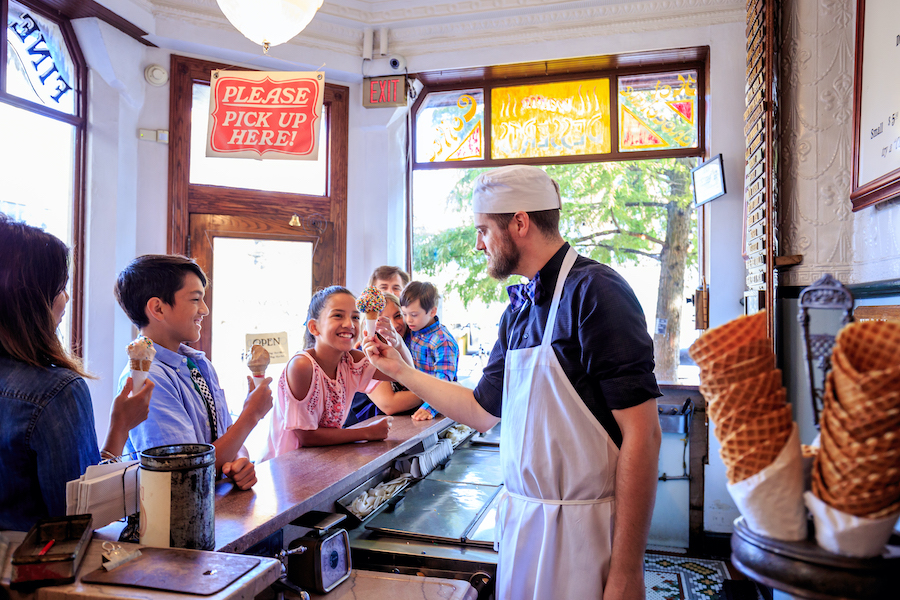 Philly used to be an ice cream town. We practically invented American-style ice cream (which uses a custard base without eggs, unlike French-style). A hundred years ago, we were considered the nation’s ice cream capital. Bassetts, founded here in 1861 and still going strong, calls itself the country’s oldest ice cream company.

What’s missing? Neighborhood scoop shops. I’m talking about locally-owned, charming-as-hell, hand-dipped ice cream shops. A place where everyone in the neighborhood inevitably ends up on Friday nights. Where the whole softball team goes after a game. Where first dates meander to an end. Places like Somerset Splits in Port Richmond; like Zsa’s in Mt. Airy; like Bredenbeck’s in Chestnut Hill. Third places, I call them. Not home, not work. They’re places where you’ll run into people. Community hubs that specialize in frozen treats. Every neighborhood in this city should have its own, but they don’t.

Which is a shame, because community, as a concept, has taken a real hit during the pandemic. We’ve spent months and months trying not to breathe on each other, and doing so was at the expense of personal connection. Restaurants are still getting into the swing of things. Those third places are more important than ever now. Ice cream shops — because of their family-friendliness; because of their universal appeal — would help fill the void COVID left in our hearts, if only we got more of them to open.

But running an ice cream shop isn’t easy in Philly. Scoop DeVille owner Spencer Philips describes the seasonal business as keeping your foot on the gas during the busy summer months in order to be able to pay the rent the rest of the year. In the winter, his custom soft serve spot shrinks its summer crew of nine people a night to two, all while trying to draw customers in with warming treats like gourmet hot chocolate.

Zsa’s dove into the hot chocolate game last winter, too, with a Midnight Cocoa ice cream float. “We’re year-round and it takes some creativity,” says owner Danielle Jowdy. The shop also sold pints to-go at its scoop shop. December, strangely, ended up being Zsa’s best month of 2020, according to Jowdy.

“You’re probably not going to make as much money as you’d like to,” Philips jokes, but he says it’s worth it if you love ice cream. That’s why Scoop De Ville has a third storefront coming to the corner of 5th and South Streets in the next few weeks, and Philips says he’s been looking into other neighborhoods with good foot traffic, like University City, Fishtown, and the East Passyunk area.

A few more hot spots for cold treats are expected to open soon, which is nice. Two national chains with cult followings have announced outposts in high-traffic parts of town: Van Leeuwen in the Gayborhood and Jeni’s in Rittenhouse and Fishtown.

Perhaps the most exciting news for those of us in-the-know: Milk Jawn plans to open a scoop shop this summer in South Philly. “The whole reason I started Milk Jawn was because Philly needs more ice cream shops!” says owner Amy Wilson. “Ice cream is an experience. I don’t want to have to jump in my car. A neighborhood place where you go with your family is a quintessential summer time activity.” (Wilson isn’t sharing the exact location yet, but says it will likely open this summer and be a year-round operation.)

These are good signs of progress and hopefully a preview of more to come. The pandemic gave many chefs and hospitality pros the push they needed to open new food businesses, like bakeries, brunch shops, and pasta pop-ups. Let’s make local ice cream shops the next thing.

And we ice cream lovers have a job to do when they do open. If we want neighborhood parlors on every corner, we need to support them. Even in the cold months and on rainy nights. It’s the only way to bring that part of our history back to life.