"I fucked up," Schroeder told us, later emailing a statement, which appears here in its entirety. 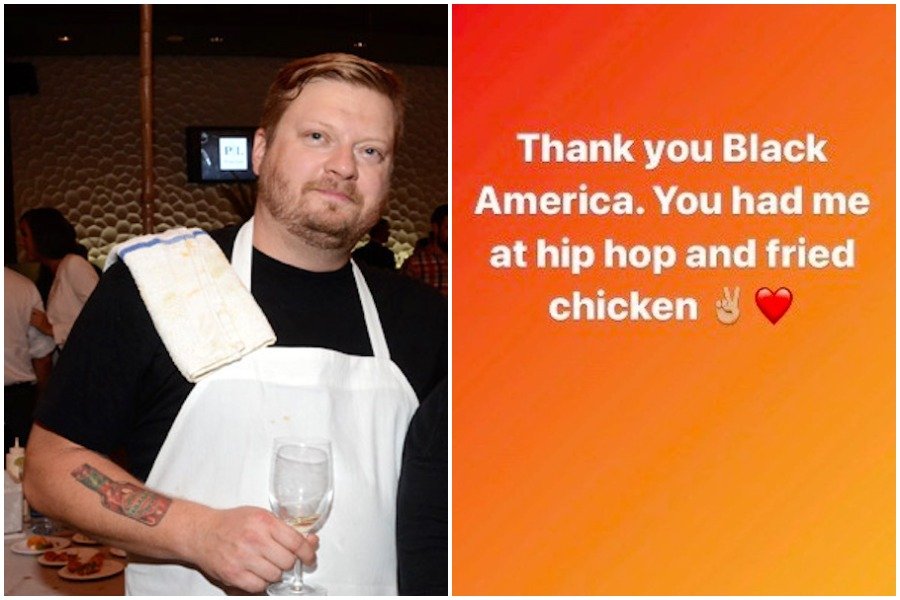 Hungry Pigeon chef Scott Schroeder has a reputation for being the kind of person who speaks his mind on social media. And now Schroeder finds himself in trouble over some comments he made on Instagram about “Black America.”

On Sunday, as protests and riots continued to spread across the country in the wake of the George Floyd murder in Minneapolis, Schroeder felt the need to go on Instagram and state the following: “Thank you Black America. You had me at hip hop and fried chicken.”

He also decided to issue his thoughts on the riots, not that anybody asked him.

“Looting, rioting, and setting things on fire is dumb,” he wrote. “Seeing people of all colors and ethnicities standing up against the police state is absolutely fucking beautiful though.”

So, it appears that Schroeder was attempting in some really unfortunate way to be supportive of the general idea behind the protests. But he couldn’t manage to do so without stereotyping people.

His comments and reaction to them have been swirling around on social media, and on Tuesday, an anonymous blog post attributed to “Several laid-off and former staff members of Hungry Pigeon” appeared on Medium.com. The post denounces Schroeder’s “racist and domineering social presence” and his “anti-black rhetoric.”

In light of some recent instagram posts made by Chef/Owner of Hungry Pigeon, Scott Schroeder, we as laid-off staff feel it is our responsibility to respond to his racist and domineering social media presence. We wish to publicly denounce his anti-black rhetoric as well as his recent lashing out at former employees who have directed legitimate criticism at his business practices and his behavior on social media.

In a string of instagram posts on Sunday May 31, Scott called into question the mass response to both the recent murder of George Floyd and the larger issue of police terrorism in this country. He then went on to bizarrely stereotype the black community, saying, “Thank you Black America. You had me at hip hop and fried chicken.” Scott’s respectability politics and his effort to delegitimize direct action in the wake of yet another police murder of a black man are inappropriate and smack of white chauvinism. The post is made even more insidious given that Scott turns a profit selling fried chicken to his wealthy patrons in Queens Village, all while reducing the black community to a mere stereotype.

In addition, Scott has recently taken to using his large platform on instagram to publicly embarrass and pick on former staff members, before quickly blocking them to avoid accountability and play the victim. His recent online harassment has gone so far as to include a former staff member’s family and personal details about their life. All of this on display for his many thousands of followers. As currently laid-off staff, we believe it is unacceptable for our boss and the owner of the restaurant to engage with former staff members in this manner, but given his bullyish behavior in the workplace, it unfortunately does not come as a surprise. It is discouraging to see that while Scott and his business partner, Pat O’Malley, have offered virtually nothing in the way of communication or support to their out-of-work employees, Scott seems to have plenty of time to disparage protesters and bad-mouth former employees.

Scott’s recent attempt to evade accountability by trying to explain away his racism before deleting his instagram account altogether is obviously insufficient. His views do not represent those of the staff of Hungry Pigeon and we call on him to publicly apologize for his racist comments and his bullying as well as donate to the Philly Bail Fund and Black Lives Matter Philadelphia. While Scott criticizes protesters online, several former members of staff and currently laid-off employees have been in the streets demanding justice. We say unequivocally, Black Lives Matter! We demand justice for George Floyd and all colonized people who have died at the hands of the US police state!

Schroeder’s Instagram page has vanished into the ether. We reached out to the chef on Wednesday morning to ask him for his reaction to the outrage over his comments and, specifically, to the blog post. After telling us that he “fucked up,” he emailed us the following statement, which he asked us to publish in its entirety:

I have had a mirror shoved in my face that is well deserved. It doesn’t matter that my intentions were to be pro-black, I said a racist idiotic tone def thing. I am sorry for it.

But being sorry doesn’t change anything. All I can do now is commit to working harder to be a better ally for all black people and all people of color. I need to do better at holding myself accountable. I am going to have to work harder in recognizing and addressing my privilege and flaws and incorporate that change into my daily life.

This doesn’t fix the hurt that I’ve caused but these are some of the actions I’m taking: every month I will contribute to Philly Bail Fund, Black Lives Matter, and Justice for George Floyd. I will be focused and reading about how to become anti racist and calling out racism when I see it. My only hope is that everyone takes a look in the mirror and reflects on what they can do to make themselves better as well.

And a couple of hours after we originally published this story, O’Malley, Schroeder’s partner in Hungry Pigeon, sent us the following:

I’ve known Scott for over 15 years. I’ve watched him raise his son Luke and grow a relationship with one of the kindest people i’ve ever met, his wife Maria. I personally do not believe he is intentionally perpetuating racism through the restaurant or beyond, but I do not condone the comments that he made through instagram.

In regards to the treatment of our staff, I know there were wrong doings and I know there was more I could have done in my role as his business partner to curtail these mistakes, and be more proactive in maintaining a healthy and safe workplace at Hungry Pigeon. We have since reached out to our staff, to open dialogue to apologize, and to help us build a better workplace for them to return to if they will give us the opportunity.