During two days of panels and conversations, these five ideas stood out. 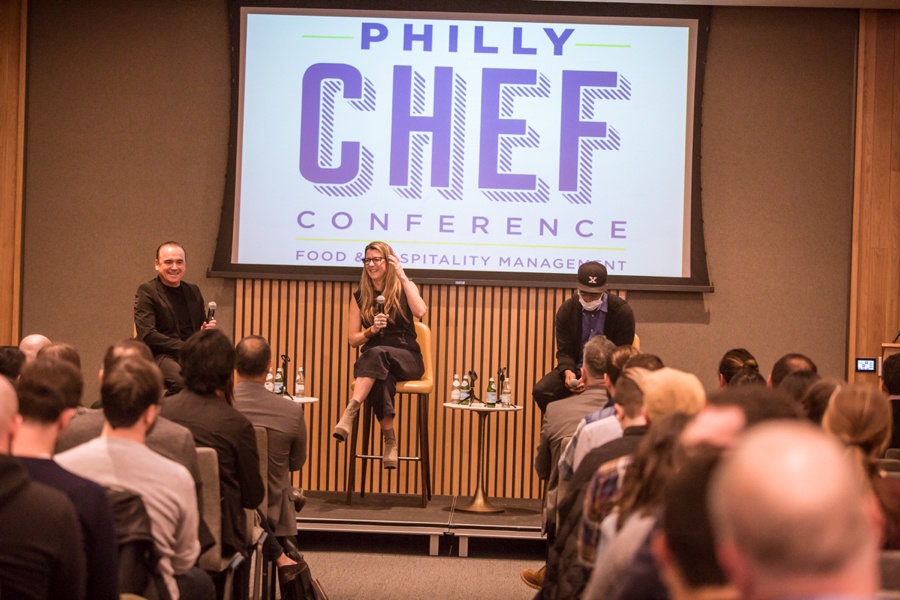 Philly Chef Conference, the industry-focused event put on by Drexel’s School of Food and Hospitality Management, just wrapped up its seventh year, and it shows now sign of slowing its growth any time soon. Since the event was mostly industry-facing, and large portions of it weren’t marketed to the public, here are five impactful moments and ideas from the conference that are relevant to Philadelphia diners.

1. A surprisingly simple way for chefs to combat climate change.

On Sunday morning, Anthony Myint (best known for his role as a co-founder of Mission Chinese, a boundary pushing San Francisco pop-up turned New York restaurant) gave a talk about his non-profit organization, Zero FoodPrint. Myint describes the organization as basically a crowdfunding program to help farmers worldwide transition to farming practices that improve soil health, which in turn captures carbon from the atmosphere. Through ZeroFoodPrint’s programs, restaurants collect an optional one percent fee from diners, which they then use to help farmers make shifts in their farming practices – things like planting cover crops, using managed grazing of cows, and not turning over the soil through tilling or plowing. One study that Myint cites says that just a two percent increase in the carbon content of the world’s soils could offset 100 percent of the world’s carbon emissions. You can read more about the science here. So far, the one percent fee has been most widely applied in California, but we would love to see this program adopted in Philly.

2. Make it a priority to help your employees vote.

During a panel entitled “Chefs as Agents of Change” Kelly Fields, the James Beard award-winning chef at Willa Jean in New Orleans, shared that her company has vans that they use on election days to give their employees rides to the polls.

Follow Fields here, and check out her restaurant here.

3. We still have a long way to go in combatting abuse in the kitchen.

During a conversation with Esquire‘s Jeff Gordinier (on a panel that also included Kwame Onwuachi and Phyllis Grant) about his recent memoir JGV: A Life in 12 Recipes, Jean-Georges Vongerichten was asked to reflect on a passage in the book where he describes bringing a dishwasher into the restaurant’s walk-in refrigerator and (quoting from his book here) “beating the shit out of him.” When asked if he regrets his action, Vongerichten said that he does not, that he was glad he did it because he felt the dishwasher’s poor work ethic was getting in the way of what he was trying to accomplish in that restaurant. This was a surprising admission from such a high-profile restaurateur in front of a large audience, but the takeaway was clear: Though there are plenty of chefs who are excited to talk about the ways they’re shutting down abuse in their own kitchens, there are still titans of the industry who have yet to realize the influence they wield in shifting the industry away from normalizing abuse.

Stephen Satterfield, founder of the independent food magazine Whetstone, sat with several other indie magazine founders on a panel about telling important food stories on shoestring budgets, which talked about diversity at length. Satterfield gave a remarkably succinct and accurate criticism of diversity initiatives in the mainstream media: “When you say that diversity is hard, you’re telling on yourself and admitting that your community only reflects you and doesn’t reflect the world.”

Food & Wine’s new restaurant editor, Khushbu Shah, offered insight into her experience on the road for the magazine’s Best New Chef franchise. In response to a question about how to compare different types of service in restaurants of varying levels of formality, Shah pointed out that in the United States, we look to the style of service established by the French as the standard. She encouraged us to consider other perspectives on what “good service” might mean, which is a good reminder to all of us there’s more than one definition of what’s “right”.