A former server at the Rittenhouse Square spot claims that sushi chefs regularly drew penises on her order slips and one cook sabotaged her customers’ dishes when she rejected his advances.

Zama, the popular Rittenhouse Square sushi restaurant that sits across an alley from La Colombe’s flagship location on 19th Street, finds itself the subject of not one but two just-filed lawsuits that make it sound like a pretty terrible place to work if you are a woman.

The plaintiff in the first suit filed against Zama in Philadelphia’s federal court on Monday is West Philadelphia resident Cathryn Courtney, who started working as a server at Zama in January 2016, when she was 23. The suit lists as defendants the restaurant, general manager Bryon Phillips, and chef Hiroyuki “Zama” Tanaka, who worked for Stephen Starr at Morimoto and Pod before opening Zama in 2009.

In her suit, Courtney alleges that “unwelcome verbal comments and physical conduct of a sexual and personal nature from her managers and male co-workers” began pretty much when she started working at Zama.

The suit goes on to list specific allegations against the defendants as well as against assistant manager Craig Weiler and head sushi chef Jose Luna, who are not listed as defendants in the suit. 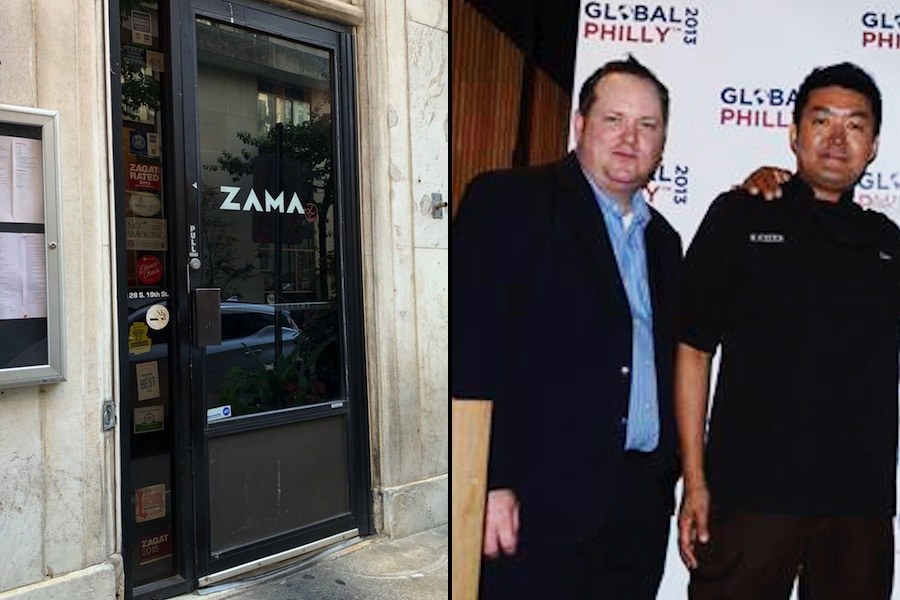 Regarding general manager Phillips, Courtney alleges that he offered “in a sexually suggestive manner” to give her private wine lessons at his home, adding that his wife “wouldn’t mind”; asked her if she was going to “get gang banged” later in the evening; told her that part of a server’s job was to sell “sex”; and said that if she ever wore jeans to work again, he would make her take off her jeans in front of him.

Among the allegations against assistant manager Weiler, Courtney claims that he called her “easy,” a “slut,” a “whore,” a “floozy,” and a “hussy.”

As for Luna, the suit claims that he blew on her neck, grabbed her sides, groped her from behind, and “smacked her butt twice.” And when she rejected Luna’s advances, Courtney alleges that he sabotaged her orders.

Courtney also says that “Zama’s sushi chefs constantly commented on her appearance and would often draw penises and breasts on her food order tickets.”

The suit goes on to claim that Tanaka, the owner, did nothing to stop this behavior when he was made aware of it by a group of employees that included longtime server and bartender Jonathan Moncavage (more on him in a moment). “By his actions and inactions … Tanaka aided and abetted acts of sexual harassment …” reads the suit.

As for the second suit against Zama, that one was filed on Monday by Moncavage, who worked at the restaurant from its opening in 2009 until November 2017. That’s when Moncavage says that Tanaka fired him in retaliation for complaints he made about the sexual harassment of female co-workers at Zama.

Moncavage’s lawsuit corroborates the basic accusations contained in Courtney’s lawsuit — that there was rampant sexual harassment of women at Zama and that management did nothing about it — and alleges that Moncavage went directly to Tanaka about the problem after his complaints were ignored.

“You shouldn’t be talking to a manager about sexual harassment,” Moncavage claims Tanaka responded before allegedly firing him. “It’s not your place.”

Moncavage’s lawsuit lists as defendants only the restaurant and Tanaka, claiming that Tanaka violated federal law by retaliating against his efforts to stop sexual harassment at Zama. But he does say in the suit that Phillips and Weiler sexually harassed female Zama employees and also failed to stop others from doing so.

Attorneys at Walnut Street law firm Willig, Williams and Davidson representing Moncavage and Courtney declined to comment for this story. None of the individuals named or mentioned in the lawsuits could immediately be reached for comment. The restaurant’s attorneys did not respond to two calls for comment on the suits, which seek unspecified damages.