Summertime in American culture means ice cream and popsicles, but here's why you should consider sweating it out with a piping hot bowl of something spicy to beat the heat. 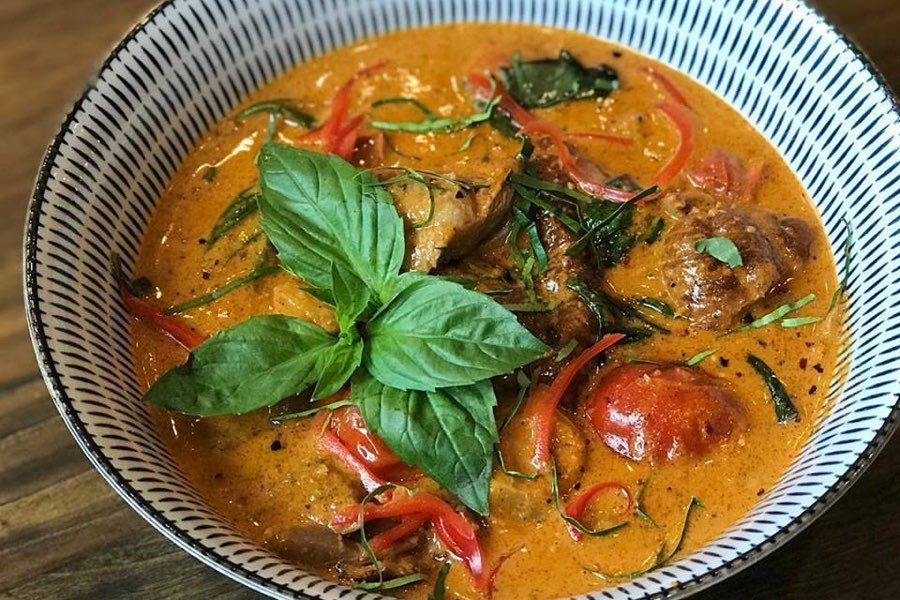 It’s been a long, hot, sticky summer — and while we at Foobooz have spent our fair share of the season chilling out with lots of ice cream, frozen cocktails, and water ice, we got to thinking about how we handle eating when it’s, well, too hot to eat.

While there’s nothing wrong with frosty treats or tall, cold drinks in the summer, heat has the power to cool us down, too. Obviously, this isn’t a novel idea — cuisines all around the world fight heat with heat or spice. Koreans eat steaming hot bowls of soup on the hottest days of monsoon season, for example, and folks in India drink their tea piping hot year-round.

The sensations of sipping hot pho and tasting spicy chili peppers might not feel exactly the same, but both kinds of foods — a steamy bowl of soup or a dish of cold noodles prepared with lots of spice — can trigger a response that cools you down more than those foods might heat you up.

When you sip a hot drink, for example, specific receptors in the nerves on your tongue send a signal to your brain that triggers a series of your body’s cooling mechanisms, including sweating, which have the power to lower the body’s internal temperature enough to negate the heating effect caused by the drink.

Still, it’s harder to convince Philadelphians who associate piping hot soup with snowy winter days to order it when the air outside feels like, well, soup — even with its hydration net cooling benefits — as Stock owner Tyler Akin has learned.

Stock’s Fishtown flagship opened in June 2014, and business was strong that first summer — but the next year, Akin found out that opening buzz had precluded what would become a typical summer slump for the restaurant.

🌬chilled corn soup with crab, lime leaf, lemongrass, Thai basil, finger chilis, miso to cool you off ❄️ we will have cold soups available for the rest of the summer ❄️ thanks to those who asked for this bc you’re right it is kinda hot rn ❄️

“I came out of that first summer thinking we had a durable year-round concept, then the next one came around and it was a pretty sharp fall off,” he said — sharp to the tune of a 40 to 50 percent drop in pho sales and a 30 to 40 percent drop in curry sales from the busiest times in winter.

“I think mainstream American culture associates soup with cold weather — that’s the European in us manifesting,” Akin said. Of course, in parts of the world that would be considered hot by American or European standards year-round, there’s not much to do but slurp it up and deal with it. “When you’re from a part of the world that’s never cold and you’ve got to figure out something to do with the bones, what are you going to do? You’ve got to eat soup when it’s hot by necessity.”

“We’ve just had to adapt our menu and lead people to other options,” he said. “We rely on fall sales to squirrel some nuts away to get through the summer. When it’s 90-plus for weeks, it takes a big bite out of our revenue for sure.”

For his part, Akin guesses that he actually eats more hot soup in muggy Philadelphia summers than in winter. “I’m not trying to be authentic or anything — I like the reaction my body has to eating something hot and going outside into an even hotter environment,” he said. “There’s something that feels good about that to me.”

But that curious cooling effect isn’t just limited to dishes that are temperature-hot — it works with spicy foods, too. Compounds we taste in hot chilis activate the same receptors and cooling response (here’s a deeper dive into why and how we perceive both hot and spicy sensations the same way).

Those cooling effects don’t just give you relief — they can also bring back appetite, which for many folks is suppressed in hot weather.

Cuisines in parts of the world like Southeast Asia that are often warm year-round feature what folks have on hand, Saté Kampar chef-owner Ange Branca notes — including spicy ingredients like hot peppers, which grow best in hot climates. The effects of spicy peppers can boost appetite affected by a hot climate.

“You enjoy eating more because a little bit of pepper in your meal opens up your palate, and when it’s hot and muggy outside you don’t really feel like eating much,” Branca said. “Peppers cause you to really enjoy the flavors and engage with your food when you don’t feel like you want to eat anything.”

She points to Saté Kampar’s weekend brunch menu, which features nasi lemak — coconut rice, peanuts, crispy anchovies, and hard-boiled egg topped with spicy sambal and bundled into a banana-leaf packet — as an alternative to conventional brunch fare when temperatures are high. “To me, a lot of people would rather have a nasi lemak with rice than pancakes on a hot summer day,” she said.

Branca also points out that in Malaysia, chefs and diners alike think about balancing yin and yang with what they eat — combining ingredients with complementary flavors and effects, like a spicy curry tempered with rich coconut milk, or slices of cooling cucumber or watermelon on the side of a pepper-packed dish.

Kalaya co-owner and chef Nok Suntaranon echoes this sentiment. “We don’t eat just curry” in Thailand, she said. “We eat something crunchy like cucumbers, lettuce, or other raw vegetables that we grow to go along with it. That helps to mellow the spiciness by a lot.” Another example of this balancing act is pla heaeng tang mo, or watermelon served with dried fish — an appetizer eaten in Thailand during the hottest parts of the year. (It’s not on Kalaya’s menu, but you can ask for it.)

Suntaranon also points out that “in Thailand, we eat curry with salted fish, a little bit of omelet, a little bit of raw vegetable — we’re not just putting curry and rice together. That’s why I have the cabbage on the menu.”

She’s referring to kalum tod nam pla, a simple dish of crisp, juicy cabbage, quickly sautéed and seasoned with garlic and fish sauce. It’s one of Kalaya’s most buzzed-about items — perhaps because it anchors the big, bright flavors and varied textures of richer dishes on the menu.

“Mix things together and have a few things at a time — a little bit salty from the egg yolk, spiciness from beef curry, a little cabbage, they all have different flavors,” she said. “In my country, we can sit outside with a nice breeze or have our fan on, eat spicy curry, and be happy.”