Reading Terminal Market Is Getting a Pedestrian Plaza 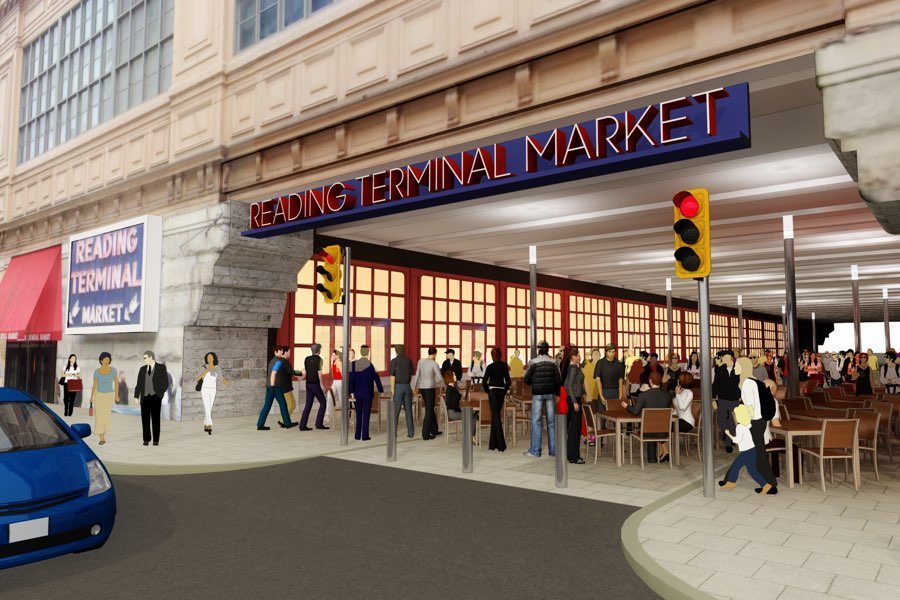 If you’ve ever walked, driven, or ridden on Filbert Street between 11th and 12th Streets, you’ve seen how jammed up — and potentially dangerous — the Reading Terminal Market’s southern border can be. Now, the city and Reading Terminal have partnered on the Filbert Street Transformation Project, a $1 million renovation intended to make 15,000 square feet of space adjacent to the market more pedestrian-friendly.

It’s important to note that while the design does include retractible bollards that will allow the 1100 block of Filbert to be closed to car traffic during designated “pedestrian hours,” cars will still be able to access Filbert Street.

Other improvements in the works include widening sidewalks by six feet on about two thirds of the north side of Filbert Street in order to accommodate additional outdoor seating and removing curbs on the block to make the sidewalk level with the street. One section of the market side of the block will be designated for passenger loading and unloading as well as rideshare pickups.

In addition to offering an expanded footprint to Reading Terminal, the project is intended to calm traffic, making the block safer for all travelers, and improve wayfinding signage directing pedestrians to Jefferson Station and nearby Market Street.

In addition to more outdoor seating, the project will create space for pop-up retailers to sell food and other items outside the market, plus permanent art installations and a mural: local artist Jason Roberts will create a set of two Reading Railroad replica train car sculptures, which will also serve as street furniture, for the plaza. A mural created by Mural Arts Project and artist Jon Leidecker, already in progress, will be installed in the vestibule of Jefferson Station on the south side of the block.

Officials expect the project to be completed in spring of 2020.