Eddie drowns a fish in butter and almost drowns himself. 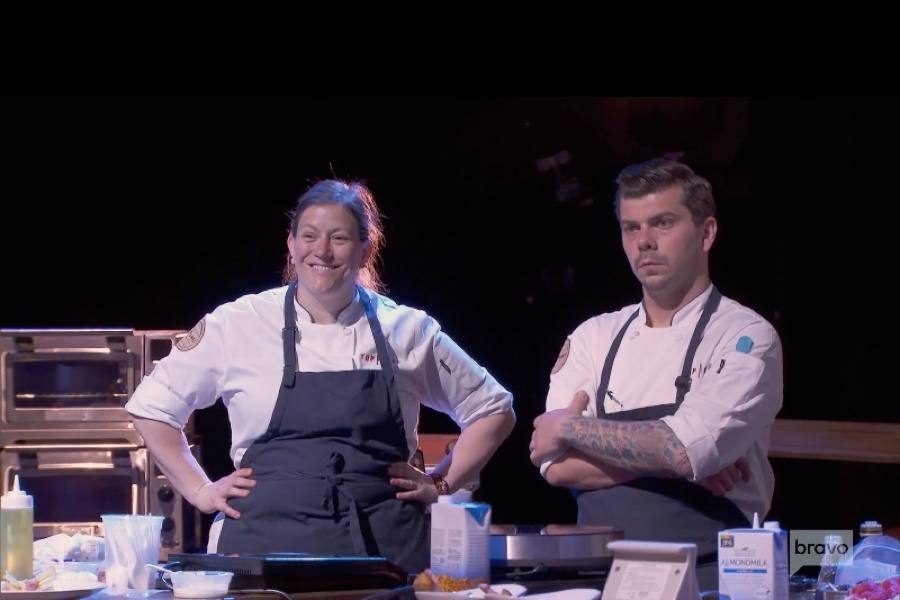 Last time I checked, Nashville wasn’t in Kentucky, but I suppose it’s close enough. Onward and upward with the final eight, including our beloved and ulcer-ridden Philadelphian, who takes himself a nice nap on the road trip (IN THE BMW … “WOW, THE NAVIGATION SYSTEM KNOWS EXACTLY WHERE TO GO, AND THE TRUNK OPENS AUTOMATICALLY!”).

After exhausting all the Kentucky tropes (horse racing, bourbon, and hot browns), the state’s neighbor to the south seems as good a place as any to go looking for familiarity, and they find it in Music City, USA. A mystery guest judge will be judging the Quickfire, and the cheftestants won’t know who it is until they’re done cooking.

The challenge? Create breakfast, lunch, or dinner based on a tour rider, which, depending on how shitty of a person fame and fortune has made the musician, could be daunting. Thankfully for the cheftestants, the mystery guest is Hunter Hayes, whose rider doesn’t demand things like a single plum floating in perfume served in a man’s hat.

Still, it’s a challenge to know what to cook based on the vague requests of the rider, but much like our country becoming simpler and stupider, the recurring theme of this season is to keep things as straightforward as possible. This means that no matter how elegant you can make a fancy French omelet, don’t do it. Furthermore, nobody knows what to make of shakshuka (shakshouka?) outside of major metropolitan areas. Then again, too simple is also a problem, as is the case for Eddie’s shaved vegetable salad with chicken.

Still fighting some sort of ailment, Adrienne cooks in a fog but wins the Quickfire with a filet mignon. Country singer and red meat? Go figure. Immunity is off the table, but Adrienne does get an extra hour of prep time for the Elimination challenge. The music theme continues, and the chefs must create create a dish inspired by a music memory which they will serve to Kings of Leon singer Caleb Followill, Jedi Jonathan Waxman, Sean Brock, and a bald ponytail guy.

The cheftestants have varied musical tastes, but the common thread is a passion for these musical memories, as well as some emotional stories from the group. This creates a real pressure to execute, which sends David into a tailspin in the kitchen.

Eddie becomes even more lovable after he picks Cake, which reminds him of his wife and the time he tried to impress her by making fish even though she didn’t like fish. Unfortunately, the judges were not impressed with his butter-poached snapper, and he’s up for elimination, as is Kelsey for not tasting her chicken pot pie before serving it.

Justin takes a literal approach to the challenge, picking Prince’s “Purple Rain” and putting all things purple on a plate. The judges loved it, but he somehow forgot to plate one of his dishes, making him ineligible to win. Not that he could have bested Michelle, whose snapper with corn and story of loss had Padma in tears and Sean Brock ready to hire her on the spot. She enjoys an uncontested win while our hometown hero gets scolded for using puffed rice instead of risotto and making a dish that lacked texture.

Fortunately, David’s overly salty sauce and rubbery clams stood between Eddie and the door, and he lives to cook another dish. We bid David adieu, and the game gets a little more real.