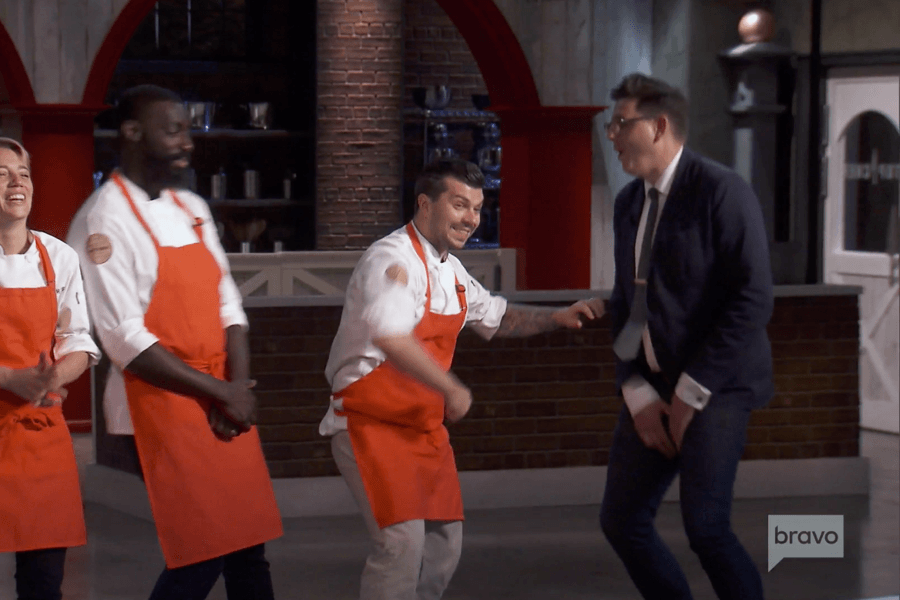 Happy New Year! We’re recapping a two-parter today because Bravo decided to expedite (get it?) one of the highlights of every season, Restaurant Wars!

But first, let’s have ourselves another Quickfire challenge. Remember Nina the gnocchi queen from Nick Elmi’s season? She’s back to guest judge an amuse bouche-off alongside another alum, Karen Akunowicz. For this little bite battle, the chefs must present their teeny tiny bites in one of three teeny tiny vessels, and three Restaurant Wars teams will be set in stoneware by whichever one they choose.

And what of the Quickfire dishes? Does it really matter since Eddie was neither at the top nor the bottom? Probably not, but it should be noted that Michelle gets the coveted immunity for her thoughtfulness and respect for the vegetables in her halibut aguachile. With immunity in hand, she takes the executive chef role on the Gray Team, rounded out by Fake Cichonski, Sara, and Pablo. Their concept is vegetable forward “Thistle.”

Eddie winds up with Eric, Adrienne, and Brian on the Orange Team. They go with “Northeast,” highlighting dishes from, well, the Northeast. Kelsey, Nini, Justin, and David, opt for a southern concept called “Third Coast.”

Each team is given 30 minutes to plan a menu, another two days to plan the design of the space with Bluprint Design (one of them is wearing a bowtie with a chambray shirt, so you know they’re the real deal), and then 6 hours to make an entire restaurant happen for 100 guests. Judging the elimination is James Beard 2018 Restaurateur of the Year, Carolyn Styne, who stresses that the most important part of execution is having processes in place to make things run smoothly. Brian takes this to heart and writes an entire service manual for Northeast while the Third Coast team coasts. There’s no shortage of overconfidence from this group as they toast champagne in the tub the night before service.

Whether it was planned or produced, this cockiness is Third Coast’s downfall. The lack of planning and training (and planning to train) results in confusion and delays, not to mention poorly executed food. Kelsey laid blame on the servers, who were seemingly inexperienced, or at least that’s what the editors want you to believe. They are a definite loser in this challenge, but the other two teams don’t run away with it, either.

Team Thistle’s dishes were less than impressive, perhaps because of Sara’s longwinded descriptions of each, or maybe because they were just bad. At least Pablo’s were. The others could have used a bit of editing, but no major offenses.

Northeast stumbled somewhat on service (certainly nowhere near Third Coast), and was hit or miss on their food. Our hometown hero was a split decision, making a forgettable striped bass crudo, then redeeming himself with a NY strip entree. The standout was Brian’s chicken ballotine, a dish that at first glance seemed a hair ambitious with him assuming front of house duty. Between this, Eddie’s steak, and Adrienne’s desserts, they take the win, and each chef gets $10,000 as a nice pat on the back. Eddie smiles and does the most adorable little fist pump you’ve ever seen, then the judges reward Brian with the overall blue ribbon.

As for the losers, a double elimination means that one chef is chosen from each of the other two teams, and Nini and Pablo are sent packing (duh). A shame for the former, considering how many wins she already had under her belt, but the front of house fuck-up was pretty monumental. The latter? It was only a matter of time for the young Argentinian.

As a parting shot, I will admit that I wasn’t a fan of the triple Restaurant Wars, nor was I a fan of the fact that it was done so early in the season. I would also bet money that given the same parameters, Colicchio and all the other judges (including guest judges) would likely shit the bed.

Furthermore, what the heck are they going to do with the rest of the season? I suppose we’ll just have to watch what happens. Stay tuned!