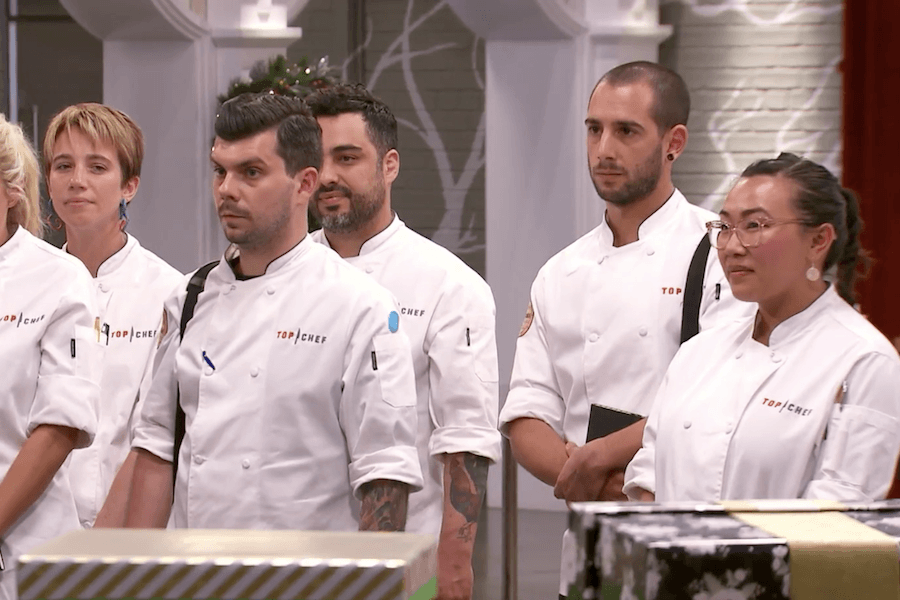 Season’s greetings, readers! Welcome to Christmas in July in December, also known as Top Chef Episode 3. We begin this week’s episode with a very remorseful Eddie and a very happy Nini, the latter of whom is proving to be the one to beat.

Since this episode is airing five days before Christmas, both challenges will be holiday-themed. Judging this week’s Quickfire are Top Chef alums Brooke Williamson and Richard Blais. David makes things awkward by announcing his man crush on Blais, then the cheftestants are given two minutes to grab ingredients and throw them in a gift-wrapped box. Now, why would the boxes be wrapped? Because the chefs are going to be playing White Elephant, duh! We learn from Brian that this is called a “Yankee Swap” in New England — a name which may or may not have something to do with literally trading human prisoners like baseball cards during the Civil War.

How this came to represent a gift exchange, we’ll never know, but New Englanders should be ashamed of themselves.

Our lone Philadelphian winds up with a box that is mainly spices, and his curry was too muddled for Brooke. David, who shall henceforth be called Mr. Awkward, makes leekonade out of leeks (this is not a thing) and impresses his man crush with a leek carbonara, winning his second Quickfire in a row.

The chefs are sent home, where they are greeted by none other than Eric Ripert. Once they collectively pick their jaws up from the floor, they sit down for Le Réveillon de Noël, the French Christmas Dinner. At the end of this traditional feast, there’s supposed to be thirteen desserts, but they are nowhere to be found. Surprise, chefs! You’re making dessert.

The chefs sardine themselves for the next two hours in a non-commercial kitchen with limited oven space. As in seasons past, there’s limited pastry experience among the group. Eddie married into pastry, so maybe he has a slight edge? It was hard to tell when he explained his dish to Colicchio and Ripert, because he was a sweaty nervous wreck.

Sweaty Eddie, we love you.

Nini and Kelsey have actual pastry experience, and these three are the judges’ favorites. Although they liked the fennel-strawberry combination on Eddie’s shortcake, Nini’s vacherin had the balance and simplicity to give her a win for the second week in a row.

As for the least popular dishes, the primary concern wasn’t that the desserts sucked (they did), it was the fact that there was no effort to make the dishes suck less. This lack of agility put Brian, Pablo, and Kevin in front of the judges, and just when I was starting to like Midwest Movement, he’s told to pack his knives for a dessert that was way too salty. We’ll miss you Kevin, and not just because you and my old neighbor have the same first name.