Their take on the traditional cudduruni hand pie makes the perfect portable snack. 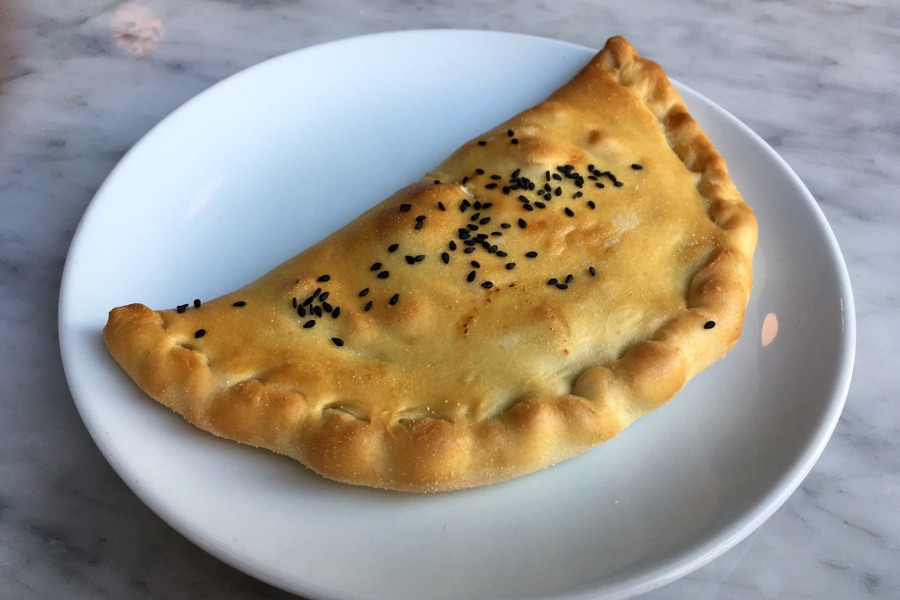 With breakfast, lunch, and some of the best pasta dishes in the city, Res Ipsa already has a lot going on — including dinner service Wednesday through Monday, up from five nights a week.

First, a note on terminology. Cudduruni and calzones are a world apart: the overstuffed, doughy calzone, which originated in Naples, is meant to be a pizza folded in half, while cudduruni’s origin as peasant food leads its crust to be finer and its fillings lighter. But Akin and his crew are referring to the treats as “calzones” simply because, well, no one in the U.S. knows what cudduruni are.

In fact, these Sicilian pocket pies are so unique that they have their own entry in the Slow Food Ark of Taste, a compendium of info about traditional foods around the world.

Here’s the deal: Cudduruni originated in Lentini, an area in southeastern Sicily. The dish evolved as cooks sought to avoid waste by making thin-crusted half-moons filled with leftover scrap dough. Traditionally, they’re stuffed with fillings like wild greens, herbs, or onion, plus a little sheep’s milk cheese, olive oil, and pulp left over from saucing tomatoes.

When I stopped by to try it, there were two versions of cudduruni on offer: one that’s reminiscent of the traditional version and filled with broccoli rabe, mozzarella, and tomato sauce, and another decidedly more decadent take filled with saucy meatballs.

I ordered the veggie version, which turned out to make an ideal quick lunch. The crust was tender and light — not flabby or doughy like pizza crust can be — and the filling was tender, with just enough tomato and cheese to add brightness and umami to the well-cooked greens.

As traditional as they are, these hand pies are the perfect fast-casual convenience food for our age: they’re portable, relatively tidy, and could work well as lunch, dinner, or breakfast. Think of them as a savory, bespoke toaster strudel.

And Akin said that the kitchen plans to switch up the fillings every week or so, with one option for vegetarians and another that includes meat, so there will always be a new cudduruni to try.