Philly Ranks 4th in the Nation in Food Truck Friendliness

A study by the U.S. Chamber of Commerce found that "Philly shows brotherly love" to its food truck entrepreneurs. 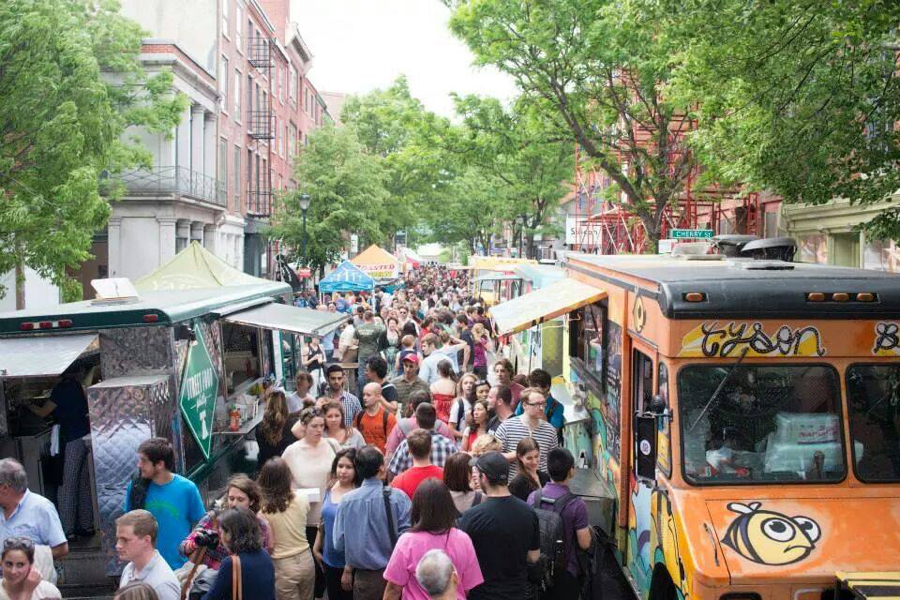 Food trucks are everywhere in Philly: on our college campuses, at our beer gardens and Night Markets, parked alongside busy avenues, bustling intersections, and public spaces.

And the reason, besides the city’s ingrained entrepreneurial spirit and our exploding food scene? That might be because it’s relatively easy to open and operate a food truck here.

Food Truck Nation, a project of the U.S. Chamber of Commerce, set out to quantify the economic impact of food trucks, which they estimate brought in $2.7 billion in revenue nationwide in 2017 — a 300% increase from $650 million in 2014.

The project also evaluated and compared 20 American cities on metrics like how easy it is to obtain permits and licenses, comply with restrictions for everyday operation (like how many times a truck must check in at its depot in a day, or how far it must vend from certain sites), and the number of regulatory procedures — and the total fees — owners must deal with in order to become operational.

Food Truck Nation found that the five friendliest cities for mobile food vendors are Portland, Denver, Orlando, Philadelphia, and Indianapolis, in that order, with only Orlando scoring in the top five across all three metrics. Boston, Washington, San Francisco, Minneapolis, and Seattle ranked the worst of the 20 cities evaluated.

Although any food business owner has an L&I horror story or three to tell you, Philly ranked third in terms of obtaining permits and licenses and topped the list when it came to restrictions on food trucks. The city ranked 13th, though, in terms of barriers to operation, with 13 procedures, 24 trips to regulatory agencies, and $25,292 in fees required to start up and run a food truck for a year.

On average, according to the report, a business owner will complete 45 annual regulatory procedures, spend 37 business days dealing with regulations, and fork over $28,276 in regulator fees in order to get a food truck established and through its first year of business.

Food Truck Nation did qualitative interviews to contextualize this data, too: In some ways, the report found, operating a food truck in Philly is relatively hassle-free, because few regulations apply specifically to food trucks. Rules that are enforced apply more specifically to sanitation and food safety.

But the drawback is that a specific requirement for health inspections can become burdensome: food trucks must be inspected for any large event at which they vend, which can add up to anywhere from 10 to 30 inspections in a year, not including the truck’s regular annual inspection.

The report also noted that Philly is a bit like “the Wild West” for food truck owners — in that enforcement of what rules food trucks must heed, like not vending past midnight, are inconsistently enforced, with this issue showing up frequently in qualitative interviews with the city’s mobile food entrepreneurs.

Check out the full report, with lots of data and shiny infographics, here.