While culinary schools around the country are closing, Drexel’s is going for broke. That’s big news for Philly’s food scene. 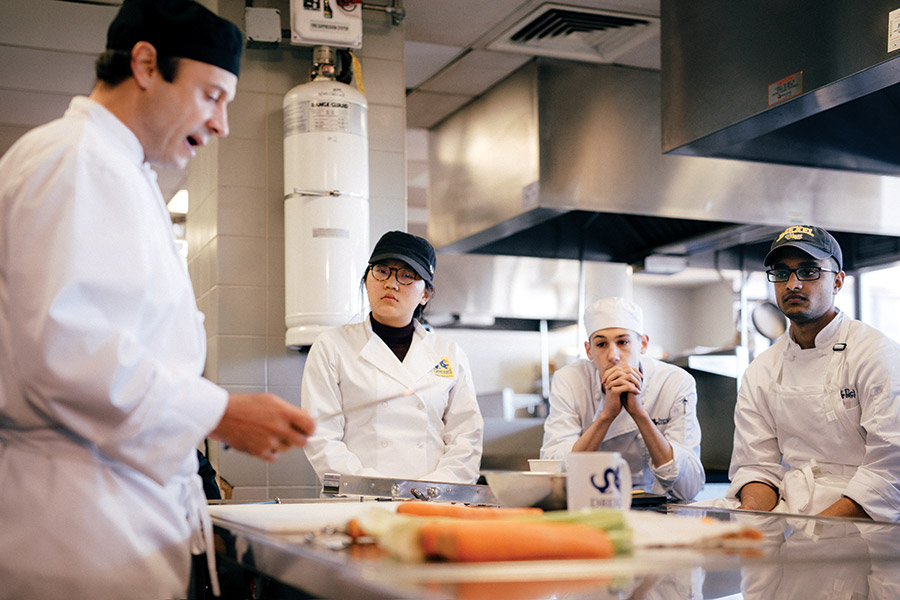 A class at Drexel’s Center for Food and Hospitality Management. Photograph by Jauhien Sasnou

The initial Philly Chef Conference, back in 2014, was a pretty big deal. It was the first of its kind: a two-day event put together by Drexel University’s Center for Hospitality and Sports Management and featuring some of the biggest names in our city’s food scene, all together in the same hall, participating in panel discussions, holding cooking demonstrations, giving lectures on hot-button issues of the industry. It was designed exclusively for Drexel students and industry folk. In the following years, it grew even bigger — or at least less myopic. It wasn’t just about Philly anymore; it was about where Philly stood nationally. Last year, the conference was able to nab prolific D.C. restaurateur Derek Brown, longtime New York Times wine critic Eric Asimov, and renowned food chemist Harold McGee.

The conference, now in its fifth year, returns this month with an agenda that includes a keynote by celebrated Toronto restaurateur/author Jen Agg and a panel discussion with Top Chef’s Gail Simmons, led by Esquire food and drink editor Jeff Gordinier. Drexel’s ability to land name-brand participants speaks to its sudden rise to power in the culinary-school landscape at a time when culinary schools — even the great ones — are losing their legitimacy among industry professionals.

In 2015, Le Cordon Bleu closed 16 of its locations across the U.S. Last year, 40-year-old D.C.-area mainstay L’Academie de Cuisine shuttered its doors for good. Cooking-school tuition costs can be triple those at an average public university, and for prospective students, the numbers just don’t add up; most culinary careers start just above minimum wage. The prospect of fame and cool arm tattoos can only take you so far.

But Drexel is boldly doubling down on culinary school. The Center for Hospitality and Sports Management changed its clunky name over the summer to the Center for Food and Hospitality Management, “to help strengthen its image and focus,” says program director Mike Traud. His belief: Drexel’s school-wide co-op program — which requires students to enter the workforce before graduation — gives its culinary school an advantage over more traditional stand-alone schools, because in the hospitality industry, hours in the kitchens — the kitchens that matter to us — count more than degrees. Competing on Top Chef feels less like a pipe dream when you’re thisclose to Gail Simmons. To the next generation of Philly’s great chefs, that matters.

Published as “The Chop Shop” in the March 2018 issue of Philadelphia magazine.