When Did Tipping Your Barista Get So Damn Complicated?

When everyone stopped carrying cash, tech changed the rules, and now dropping a Hamilton on your morning coffee-and-pastry run is somehow normal. 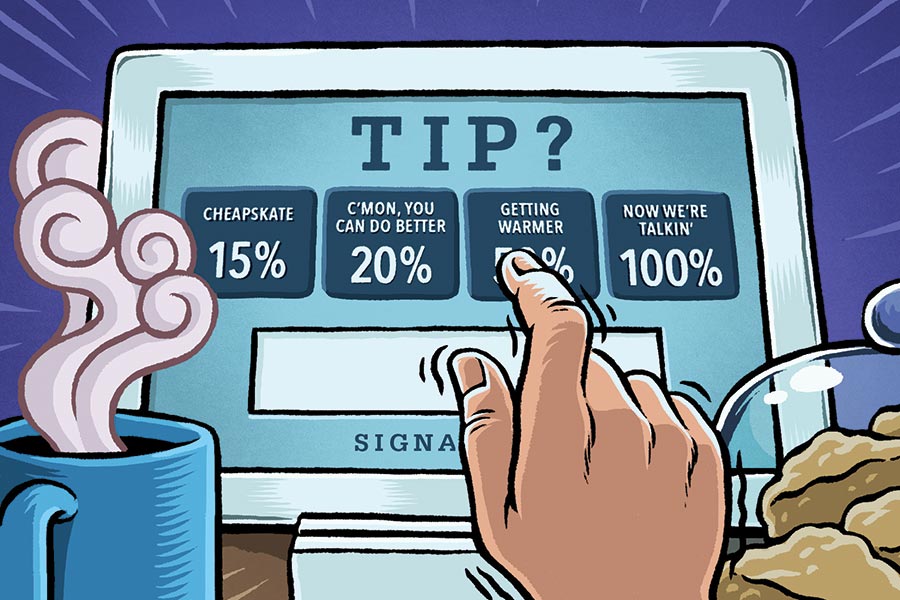 A cup of drip coffee in the city goes for about $2 now — which already feels like a lot of money for what is essentially bean water. But it’s good stuff, so we don’t mind; it’s likely roasted in Philly, organic, sourced fairly from some farm in Ethiopia. So you swipe your card, the barista spins the screen around, and there you are, facing a moral dilemma at 7 a.m.: three tip options, staring you in the face. The pressure’s on, too, because the transaction can’t be completed until you make your choice, one of which is often a button that says “no tip.” Direct barista eye contact is inevitable. Are you going to yield to this new guilt-tip culture — one that preys on your good conscience — or be a Scrooge?

We have no real idea how and when to tip anymore, because Square (those spinning touchscreen registers) fudged up the metaphysical playbook we followed for decades. The unspoken-but-agreed-upon system that was in place: In full-service restaurants, regardless of the service, tip 18 to 20 percent; at bars, tip a dollar per beer, maybe a few bucks more for a fancy cocktail or wine. In coffee shops (even though pouring a drip coffee is no different from pouring wine or beer), it was always just whatever loose change we had — a dollar, tops, if the barista knew how to crown your latte with a rosette. But when everyone stopped carrying cash, when everything went paperless, tech changed the rules, and now dropping a Hamilton on your morning coffee-and-pastry run is somehow normal.

The good news is that Joe, a Rival Bros. East Passyunk employee (and 12-year coffee-shop vet), says he doesn’t expect a tip at all — despite the on-screen prompt — unless it’s a drink that requires a little more work: lattes, cappuccinos, macchiatos, cortados, basically anything that’s not a drip coffee. Or: “Sometimes, we’ll build relationships with our guests. And if we’re taking the time to talk to you, to get to know you and answer questions, it’s different. That warrants a little extra something, right?”

So in places where employees are paid an adequate hourly wage — vs. restaurant servers, who are paid less per hour because tips should get them up to minimum wage — it’s okay to tip the way people used to back in the day, when a little extra love justified a little extra money. It’s the last vestige of gratuity unsullied by any sort of modern systemization. Take advantage of it while you still can.

Published as “Guilt Complex” in the February 2018 issue of Philadelphia magazine.