“Don’t Die in My Restaurant,” and Other Takeaways From Han Dynasty’s Insane Wu-Tang Dinner 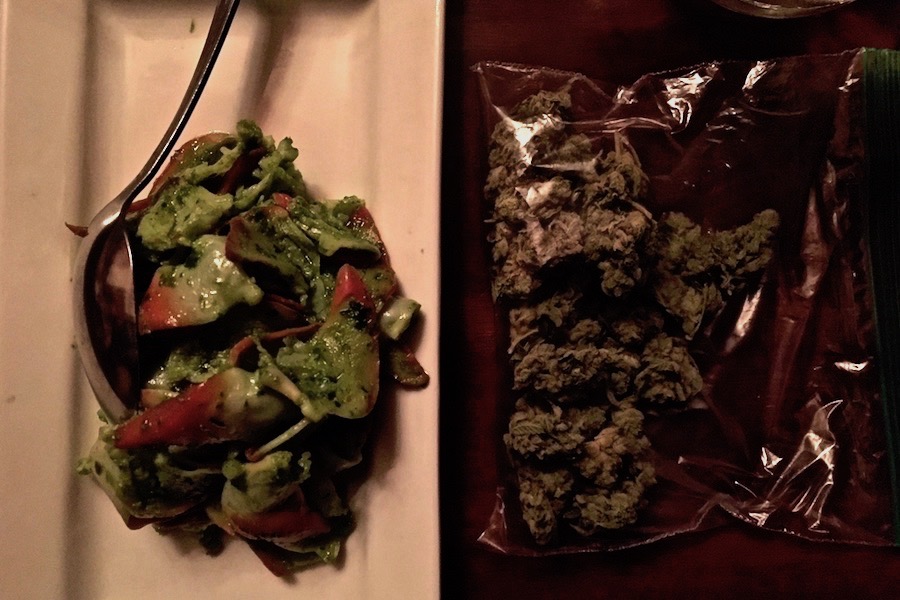 It was midnight when I finally got in a Lyft. As I was leaving, Han Chiang asked me, “Are you full? Are you drunk? Are you high?”

When the themed multi-course fête started four years ago, it was more fanfare than Wu-driven. According to Founders Brewing Company’s Dave Goldstein, the whole thing started after he and Second District Brewing owner Curt Decker drunkenly broached the idea with Chiang, who agreed to host the event in the basement dining room of his original across-the-street-from-here location. It would be 36 courses of spicy Szechuan paired with rounds and rounds of craft beer. It wasn’t until members of Wu-Tang caught on — through Facebook of all places — that they decided to alter its course. First, they said no more pork (some of the group’s members follow halal diets), and then Ghostface Killah stepped up to the plate and agreed to perform mid-meal, making it fully certified.

While the event was held at Han Dynasty’s New York City location the night prior, I didn’t know what to expect. I knew that this year there would only be 20 courses and 16 rounds of beer, as opposed to the 36 appetizers, entrees and desserts of yore. I knew that I’d be going alone, which would probably make for a better story, but would also require regular contact with someone on the outside, lest I find myself in danger, be it food paralysis or drunkenness. I knew there would be weed — because how could there not be weed? And that the beers would just get higher and higher in strength, eventually leading to the last glasses of Dogfish Head’s 120 Minute IPA and World Wide Stout, with its 15-20 percent ABV.

But that was about all that I knew. So, as any proper journalist would, I made assumptions. Here they are, and conversely, what actually happened:

If I got there early, I’d get a seat next to Ghostface.

I was actually the last person to be seated and had to bug the poor staff member in charge of herding the guests about getting my name on the list. I sat with him as he guided over 160 people to their seats, many of whom wore Wu tees and held vinyl records. Thankfully, he found a place for me in what I referred to as the “VIP brewery section.” Though I’m not sure that’s entirely true, there were curtains. I sat next to a guy named Ruby who mansplained to me that crustaceans have lungs and that last piece of lobster everyone else left on the sharing plate — the one I just ate — was them.

I also had this inkling that Ghostface wouldn’t actually perform, that he’ll be too full, or drunk. Twenty courses and sixteen beers is a lot to consume pre-performance… and in general.

Well, the second part is true. But the first part: no way. I’ve been to some pretty forced celebrity events, and this was not that. Ghostface came in at 100%, barreling through Wu hits like “Shimmy Shimmy Ya”  and “Ice Cream” as he made his way into the crowd, rapping directly into the faces of some super enthusiastic fans. After his performance, he met everyone who wanted to meet him — spoke to each and every person, including me. 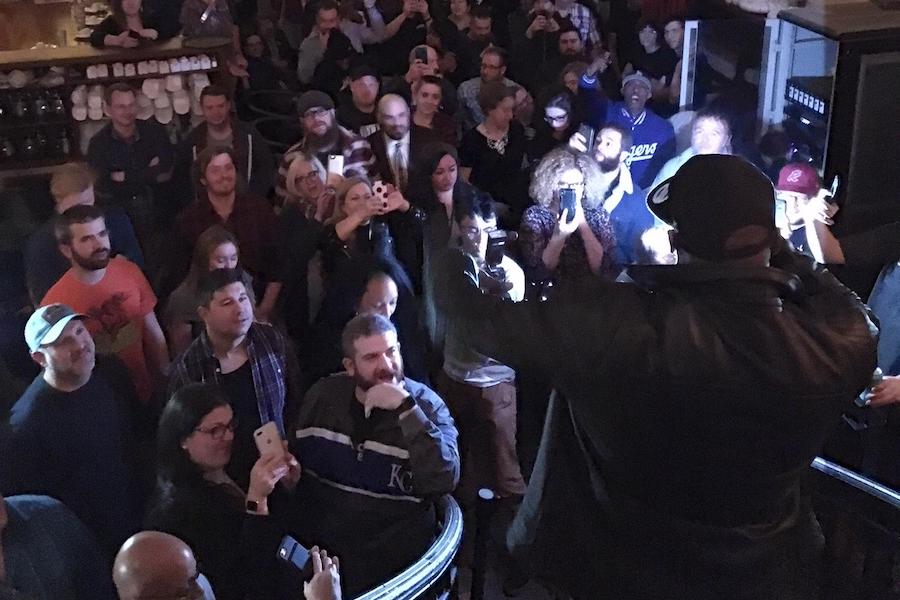 He even signed my tablemates brand new bong. 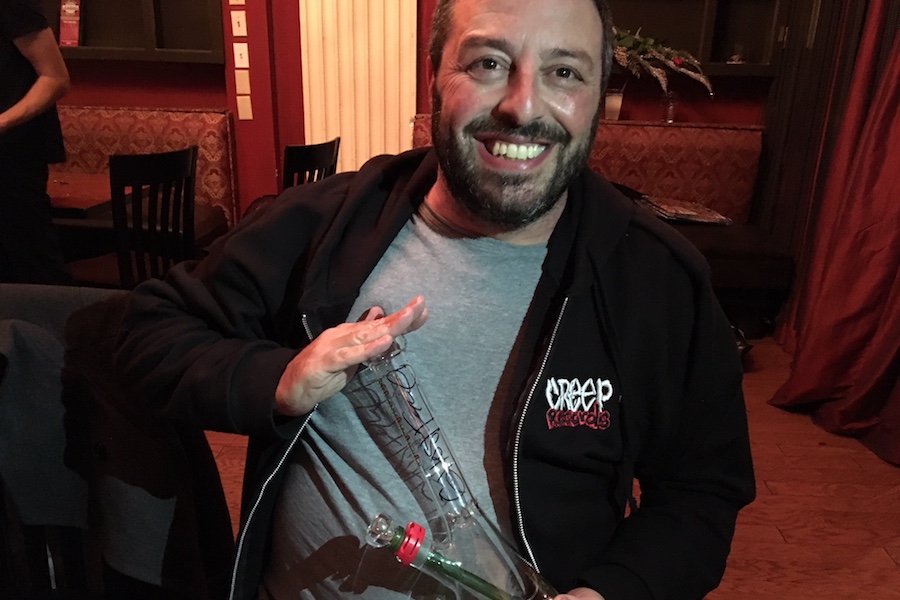 I should also mention: right before his performance, the entire restaurant was guided into the alleyway to share 2-3 blunts for what was dubbed on the menu as the “Dutch Masters Intermission.” I made them take this selfie with me. 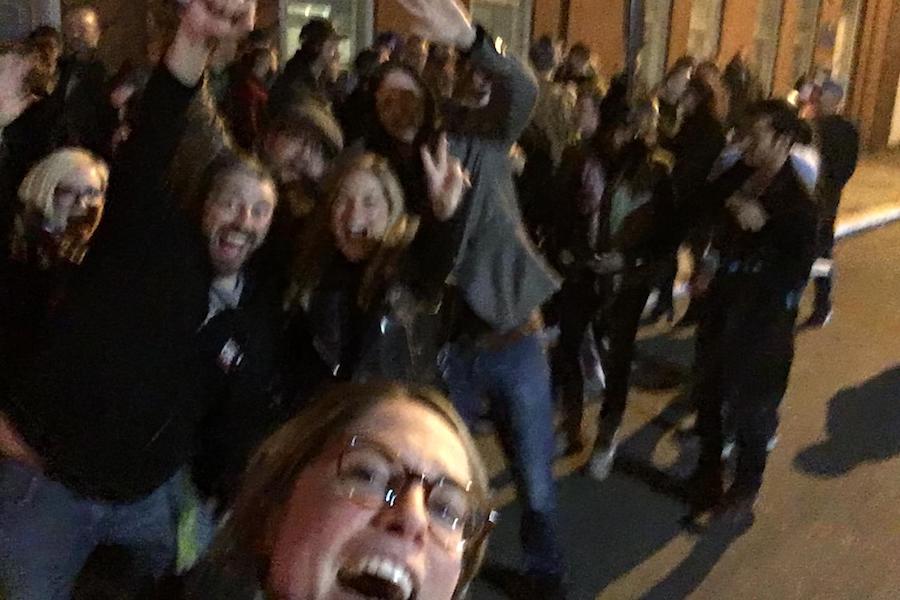 I figured I might need to slip into something more comfortable mid-meal, which is why I brought extra pants with no buttons.

Yes, I lugged around an extra pair of pants all day, from 9 a.m. until this meal, on the off chance that I might get so full I couldn’t breathe. And, might I say, Uniqlo makes a great eating pant — but I didn’t need to use them. I took Chiang’s advice, which he provided pre-meal in perfect Chiang-ian affect: “Strategize your experience, take two bites of every dish,” he told us. “And If you feel like dying, don’t die in my restaurant, go outside.”

I saw myself choking on spice to the point of vomiting — at a table full of strangers.

My proudest moment of the night was the moment that five grown men started coughing their heads off around me while I sat calmly sipping my India Brown Ale and relishing my pickled short ribs. I felt like Arya Stark when she poisoned that room full of Freys. No one could stop me! (My secret? I was the only one who didn’t eat the peppers.)

To be honest, most of the dishes — from the first course of spicey beef jerky to the last (and arguably most delicious) broad bean whole fish — were reasonably hot, or not really hot at all. When our server brought out the basil black bean clams, our seventh entree, he told us, “this is spice level zero.” He was right. The thinly sliced, bean-glazed clams basically tasted like my grandmother’s turkey and gravy.

No one would be talking to each other by the 10th course.

I just figured we’d be so full, drunk and sleepy. Words would just cease to come out.

From the moment I sat down to the moment I left in that Lyft, everyone around me — hundreds of people — were fully engaged. Sure, we were also Instagramming all over the place, but there was a real human interaction that can only be had when you’re at such a “what the fuck?” kind of event such as this with a bunch of strangers thinking the same thing. Something must have been in the air. Weed smoke, sure. But something else, too.