Here's why you should skip Cow Appreciation Day (a/k/a free Chick-fil-A Day) and eat a Philly-made fried chicken sandwich instead. 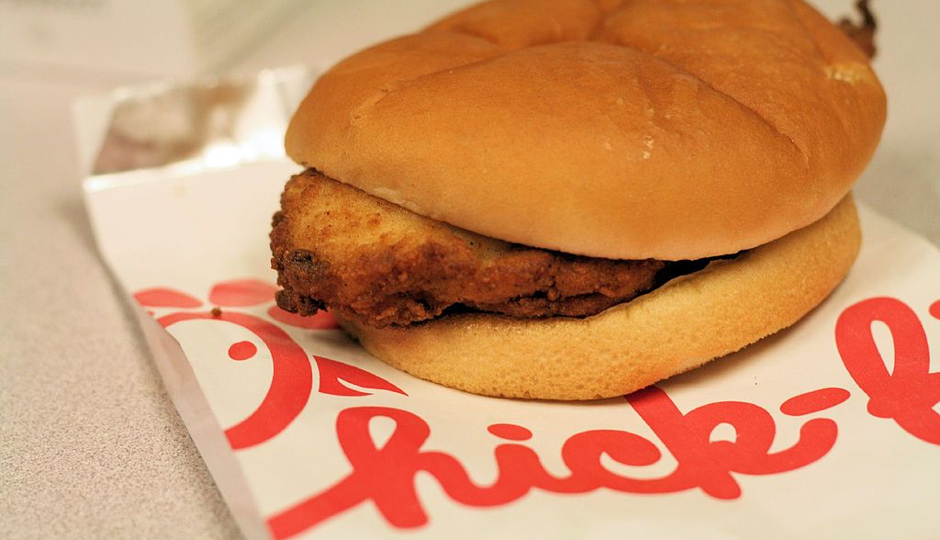 Today is “Cow Appreciation Day” at fried chicken chain Chick-fil-A, which means free entrée chicken sandwiches, nuggets and breakfasts for those who go in dressed in cow-related attire. “Cow-related attire,” by the way, includes everything from a full-on, head-to-toe cow costume or something cow-themed: a watch, a hat, etc. Cow Appreciation Day also — and absolutely — means long lines at the city’s Chick-fil-A locations: the Liberty Place food court, off Columbus Boulevard in South Philly, and on Drexel’s campus. Because people adore Chick-fil-A. They adore it for its always-chipper service, for its fried chicken (in all of its many forms), and for its pretty fantastic lemonade. The one at Liberty Place even has one of its employees hand out wet-naps to Chick-fil-A eaters nearing the end of their meals.

And fine. Those are all fair reasons to love a restaurant. But we’d be morally bereft to ignore the context in which Chick-fil-A operates.

In case you live under a rock and don’t already know this, the family-owned fast food mega-chain, in 2012, fell under public scrutiny for anti-gay marriage rhetoric made by its chief operating officer and president Dan T. Cathy. The New York Times reported on him saying things like, “As it relates to society in general, I think we are inviting God’s judgment on our nation when we shake our fist at him and say, ‘We know better than you as to what constitutes a marriage.” Equality Matters, an advocacy group for LGBTQ equality, revealed that the company’s religious charity organization — the WinShape Foundation — donated nearly $2 million to anti-gay organizations, some of which supported gay-conversion therapy.

It’s been a few years since all of this hullabaloo went down, and while the company has pledged to remove itself from the marriage debate, according to a recent restaurant review by Eater’s Ryan Sutton, it’s still “the only top 10 quick-service restaurant that doesn’t mention sexual orientation in its online equal opportunity statement, and … it holds a zero rating on LGBT benefits and worker protections from a prominent advocacy group. McDonald’s scored 100.”

So, your choices are: dress up like a cow and stand in line for free fried chicken (consequently supporting a business with likely poor ethics wired into its company policies), or pay for your fried chicken somewhere else dressed in normal human clothes. What to do, what to do?

Come on. It’s such an easy call. The Chick-fil-A sandwich isn’t even that good. It’s fine. But you know what? Philly is full of restaurants and chefs who do the fried chicken sandwich better. Don’t believe me? Just pay the measly $6.75 for an awesome, twice-fried chicken sandwich from Federal Donuts, loaded up with buttermilk ranch seasoning, American cheese, pickles and Rooster Sauce on a Martin’s potato roll. For 26 cents less, Shake Shack makes a super crispy sandwich with buttermilk mayo, lettuce and pickles. Both sandwiches aren’t “better” because they’re fancy. They’re just as junky and deep-fried as Chick-fil-A’s — just tastier. We’ve even got higher-end chicken sandwiches: Doreen DeMarco’s BBQ chicken sandwich at American Sardine Bar is fantastic. Go there, it’s open right now. Bud & Marilyn’s Nashville hot chicken sliders will knock your socks off. Prohibition Taproom has one topped with black garlic tomato salsa, cheddar and mayo, and it’s available until midnight on weekdays and 1 a.m. on weekends. Want nuggets? Try the karaage at Double Knot or the mochi nori fried chicken at Poi Dog.

These sandwiches (and nuggets) are better because they’re made better with nicer ingredients and care (not just a piece of fried white meat slapped onto a sad, smushed bun hiding highlighter-green pickles).

Moreover, fried chicken just tastes better without the pangs of conscience bubbling in the pit of your stomach.