Co-Op in University City has everything going for it. But is it enough to make you forget that it’s a hotel restaurant? 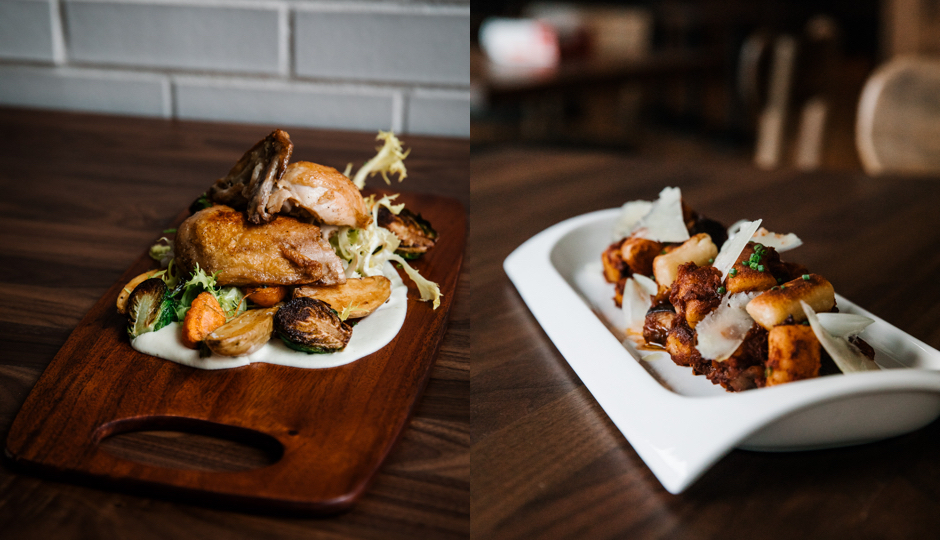 Here’s the thing that bothers me most about Co-Op, the restaurant inside the new Study hotel in University City. When I sit here and try to remember what the place looked like, I can’t. I can recall grayness and brownness, an open, airy, sunlit space with the same raw wood and metal that exist in almost every other restaurant in town of a certain era — signifiers of modernity, so ubiquitous now in their application as to be invisible—and, somewhere, a large painting of a rooster.

Order this: The crab tartine for sure, and for dinner, the ricotta gnocchi to see the kitchen at its best.

Being there, particularly in daylight when everything outside the windows is more interesting than anything inside, is pleasant. It’s comfortable. The staff is competent. The menu is just engaging enough, just unexpected enough, to be interesting. There’s avocado toast at lunch, a kale salad, an $18 burger with smoked cheddar and onion confit. At dinner, ricotta gnocchi with ramps and black truffle, a thick rib-eye steak, Maryland crab tartine (just another word for toast) on house-made sourdough. But the whole thing feels somehow constrained—bound and bordered in such a way that nothing strays too far outside the lines. It’s a menu that feels, more than anything, like it has too many fingerprints on it already.

Which is surprising, considering the man behind the Study hotel concept. Developer Paul McGowan of Hospitality 3, which already has one of these operations up and running at Yale, made a smart move when he brought in a blooded and bona fide local chef to run the line. Craig Russell spent years in Chris Kearse’s kitchen at Will. He did time at Hungry Pigeon and Townsend. Most notably, he spent two seasons running the show at the Red Store in Cape May—a place I’ve loved for its effortless, borderless cool and sense of upscale beach-town fun.

The ramp gnocchi comes closest to the casual New American excellence at Red Store—a jumble of a dish that’s hearty, comforting and classy all at the same time. The crab tartine is a fine idea (and comes loaded down with a generous portion of chilled Maryland crab), but the toasted house-made sourdough it’s served on was hard as rock. On two different occasions, the fries arrived limp and lukewarm—accompanying a serviceable burger once, and again as a side to a nicely composed summer salad and a chicken sandwich with pesto.

And these simple mistakes, combined with a menu that’s trying to be cool rather than just, you know, being cool, make everything about Co-Op feel disjointed. There’s potential here. It’s like a restaurant that’s waiting for great things to happen.

But none of them have happened yet.