15 Places to Dine Outdoors in and Around Philadelphia 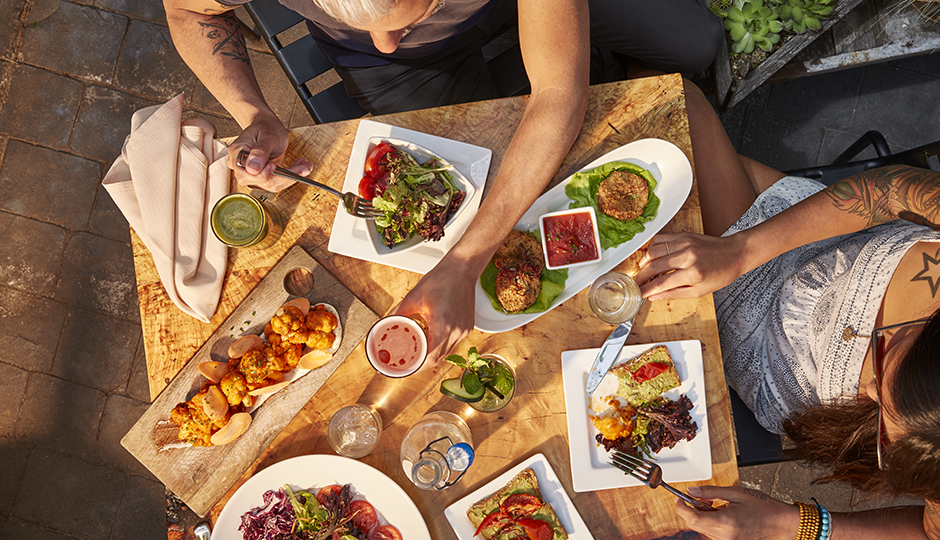 Out back, this all-day eatery has a covered bar, well-placed trees, and tables large enough for all of your friends. The menu has standouts (the tostada grain bowl, the grilled cheese), and there’s kombucha on draft. But the breakfast-until-three thing is why there are regulars. 1253 North Front Street, 215-515-3073.

Dry-rub meats, in Fishtown, by way of Brooklyn? Shockingly, it all works. The food here is so very right, the outdoor setup (with picnic tables and rocking chairs on a porch) is so chill, and the awesome happy hour (with $5 manhattans) makes starting the night here a good idea. Always. 1208 Frankford Avenue, 215-391-4888.

With twinkle lights and a pergola overhead, brick on the walls and hanging flora, this courtyard feels like some hidden gem in Little Italy. But hey, it’s all ours! And you’ll figure that out once you dig into Marcie Turney’s Italian-American eats, like eggplant parm and shrimp scampi with “lots o’ garlic.” 1234 Locust Street, 215-546-2100.

When your restaurant backs up to acres of manicured historic grounds (now the New Covenant Church of Philadelphia), you swing open the doors, pop up a tent, and serve dinner on one of the city’s most tranquil patios. Of course, it’s hard to take your eyes off the French-inflected, painterly plates to appreciate the view. 7402 Germantown Avenue, 267-335-5041.

Like a mobile home parked in Malibu, this taco cart scored the ultimate real estate — a large lot in West Philly that’s been (adorably) tricked out with lights, picnic tables and a kid’s play area and comes with a BYO policy. 5019 Baltimore Avenue, no phone.

Soft lighting, built-in benches, leafy things everywhere, and a real-deal bocce court? The only thing to remind you that you aren’t in the country is the dearth of fireflies. 2113 East York Street, 215-867-8881.

Anton’s at the Swan, Lambertville
The scene: Romantic hideaway

There are so many great scene-y places to feast alfresco in Lambertville, but this ivy-laden, tucked-away courtyard is for those who don’t care about all that fanfare. Instead, savor steaks and strong drinks among a handful of hushed tables. 43 South Main Street, 609-397-1960.

When you hear Joey Baldino is taking a turn on the grill, drop what you’re doing and get there. Simply cooked meats, crisp-edged prawns, the summer’s best veggies, on the lit-up back patio? Cancel that vacay in Sicily. 618 Collingswood Avenue, 856-854-2670. [Editor’s note: This is so popular it’s sold out until next year. Really.]

There’s the teeniest, tiniest little garden — with a pebble floor and one roof-reaching tree — behind this BYOB cheese bistro. Eating outside is well worth the wait for the bacon-lattice mac-and-cheese. 160 North 3rd Street, 267-603-3090.

Eating here feels like you just discovered some secret place that no one else in the city (world?) knows about. Alas, the secret is out; this is one of the hardest-to-score tables in town. But the wait is always worth it — for the country/city vibe, the cheese plate, the wine list, and the spring onion fettuccine. 210 West Washington Square, 215-592-7787.

You won’t find another meat-centric restaurant this light and airy, or another urban patio this chill. Don’t worry; it’s perfectly acceptable to lick your plate clean. 1310 Frankford Avenue, 267-314-5086.

With dark walls and a giant sycamore tree, the inside of Marty Grims’s newest eatery is the definition of high drama. But outside, the patio is downright serene and an ideal place to luxuriate on seafood — so start with oysters. Eagle Village Shops, 503 West Lancaster Avenue, 610-964-2588.

Like everything else at this neighborhood spot, the brick-floored side patio isn’t overwrought. The old-world (yet thoroughly modern) menu has spaghetti carbonara and a serious larder program with lots of stuff — smoked mackerel pâté, chicken liver mousse — to spread on homemade bread. 701 South 4th Street, 267-930-8538.

The patio here is huge: There’s a partial roof, hanging greenery, a mural and a screen for movies. But it’s best when chef Joe Cicala fires up the grill and does backyard BBQ Italian-style. 1927 East Passyunk Avenue, 215-271-5626.

First published as “Food” in the June 2017 issue of Philadelphia magazine.

» See more from our Ultimate Outdoors Guide to Summer in Philadelphia