It's a big move for one of the most creative chefs in the city. 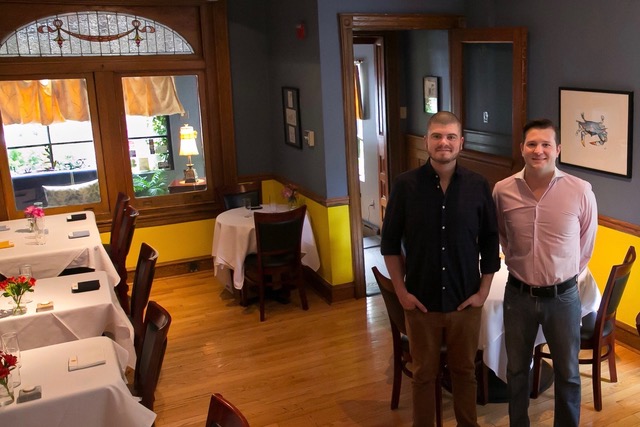 2121 Walnut Street (the former L’Image Studio) has been an address we’ve been keeping an eye on for a while now–one of those that none of us here at Foobooz World HQ could believe has been vacant for as long as it has been. As a matter of fact, I was just in for lunch at Res Ipsa–which lives just down the street at 2218 Walnut–and as soon as I got back to the office, the first thing I wanted to talk about wasn’t the egg sandwich with herbed long hot spread (which was awesome, by the way), but the fact that 2121 Walnut was still dark.

Well, that was two weeks ago. And as of this weekend, we no longer have to wonder who’s going to open there. Because Andrew Kochan, chef-partner at Marigold Kitchen in West Philly, just signed a lease and is bringing a new restaurant to the neighborhood.

We don’t have a ton of information right now, but we do know some pretty important stuff. Like that he’ll be opening the new place with Marigold partner Tim Lanza as exec chef and that both Kochan and Lanza will be bouncing back and forth between the two restaurants, keeping their eyes on things. That the concept will be New American, and that unlike Marigold, this place will have a liquor license and a full bar. And that while the new Walnut Street operation doesn’t yet have a name, it does have a projected opening date: July 1.

There’s no menu to speak of (Lanza is still working on that), but we do know that it won’t be a pure tasting menu kind of concept like Marigold. With something like 55 seats on the floor and another 15 at the bar, this is going to be a more straightforward a la carte kind of operation. But still, these two guys have spent the last couple years in charge of one of the most modern and daring kitchens in the region, so they’re probably not going to be doing hot dogs and chicken fingers–or at least not without deconstructing them, covering them with foam and offering them as Essence of Chicken Finger Over Hot Dog Soil.

Also, I totally dare Lanza to put that dish on his opening menu. It would be… Well, awesome is probably not the word. But it would certainly be something.

As soon as we know more, you’ll know more. But in the meantime, I can’t wait to see how this project comes together. That end of Walnut Street is heating up something serious.