Jonathan Gannon Is Generating Interest Around the NFL

The Denver Broncos were the first team with a coaching vacancy to request an interview with the Eagles' DC. 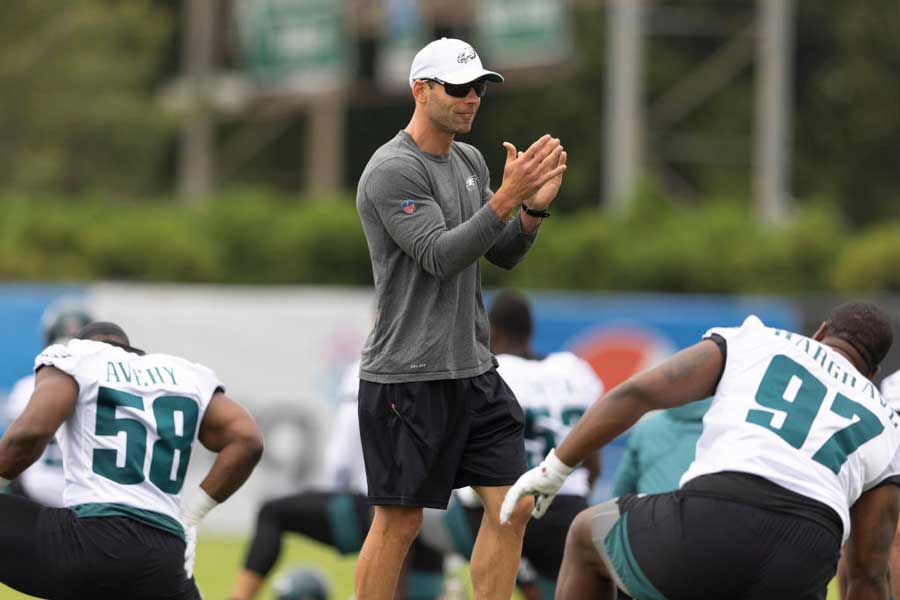 Defensive coordinator Jonathan Gannon cheers on his team during training camp at the NovaCare Complex on July 29, 2021. / Photograph by Mitchell Leff / Stringer via Getty Images

A theme has emerged when it comes to the Eagles’ organization: The rest of the NFL seems to view it in higher regard than much of its own fan base.

Exhibit No. 1 is defensive coordinator Jonathan Gannon, who has turned his unit into an overachieving bunch with a style that attempts to limit big plays as much as possible versus the uber-aggressive mentality the city almost demands.

Like he was in the 2021 offseason, when Gannon was in demand as a potential DC, now the 39-year-old coach is on at least one list for a potential head-coaching job with the Denver Broncos.

The Broncos, who moved on from Vic Fangio after three disappointing seasons resulted in a 19-30 cumulative record, requested to interview Gannon on Monday, according to an NFL source.

Despite not even hitting his 40th birthday yet, Gannon has already accumulated 15 years of experience in the league as a scout and assistant coach. Plus, he has a history with Denver general manager George Paton from when the two worked together in Minnesota for four years. Gannon was an assistant defensive backs coach under Mike Zimmer, and Paton was the assistant GM to Rick Spielman.

9 HC interview slips and counting for the #Broncos:

Typically when teams move on from head coaches, they want to move in a different direction. That means Fangio being a defensive-minded mentor doesn’t bode well for any of the other defense-first candidates this time around, but as Nick Sirianni and Brandon Staley proved during last year’s hiring cycle, if you can get in the room you can win someone over.

Along with Denver, there are currently five other coaching vacancies in the NFL: Miami, Chicago, Minnesota, Jacksonville, and Las Vegas, with the Raiders preparing for the playoffs under interim mentor Rich Bisaccia.

Gannon is also expected to be requested in Minnesota where he remains well-liked, according to an NFL source.

Back in late December, Gannon was asked about potential interviews and how they might be handled.

“Honestly I haven’t really talked to Nick about that,” Gannon told Philly Mag at the time. “In the off-season, we talked about it a little bit but … I appreciate the question but guys, come on now, we’re fighting to get into the dance.”

Since then, the Eagles have punched their ticket to the dance and will play at Tampa Bay, the reigning Super Bowl champions, in Central Florida on Sunday and Gannon will be hyper-focused on Tom Brady and Co.

“I think Jonathan would be an awesome head coach,” Sirianni said while weighing if he should add some levity in what can be an awkward situation as coaches have to weigh ambition against loyalty.