Rodney McLeod Clinches a Game and a Playoff Spot

The veteran Eagles safety returned from ACL surgery to make the biggest play of the season Sunday against Washington. 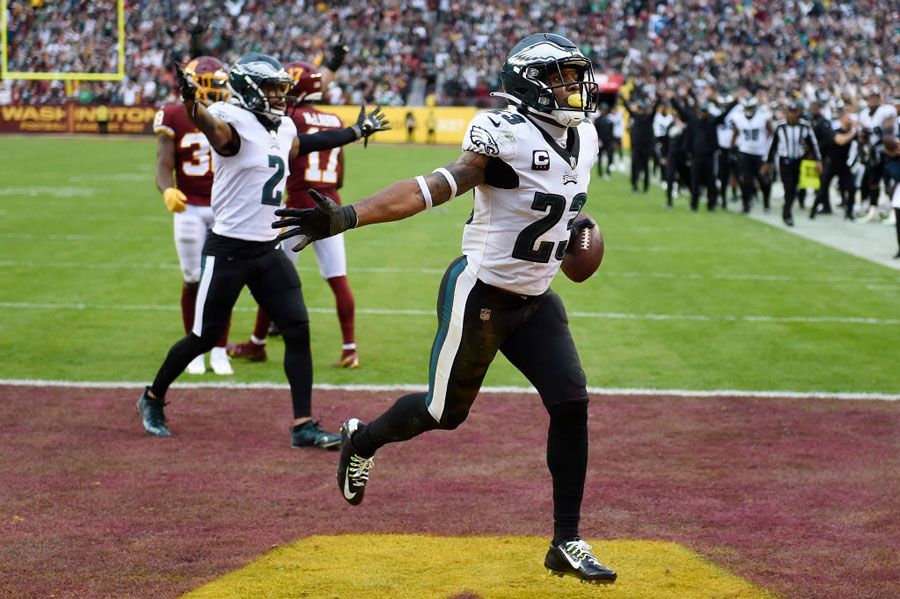 Rodney McLeod celebrates after an interception during the fourth quarter against the Washington Football Team at FedExField on January 2, 2022. / Photograph by Greg Fiume / Stringer via Getty Images

Just over a year ago, Rodney McLeod was laid up and convalescing from ACL surgery, not exactly the punctuation a proud veteran player wanted during what turned out to be the final season of the successful Doug Pederson era.

And if a Super Bowl-winning coach with a former No. 2 overall pick at quarterback couldn’t keep things from going off the rails in what turned out to be a 4-11-1 season, what hope was there for an unknown at head coach and an unproven commodity at quarterback?

Turns out quite a bit due to a host of veteran leaders like McLeod, the 31-year-old safety who saved the game at FedExField Sunday with a diving interception in the waning seconds of a 20-16 win over the Washington Football Team, his second pick in the past two games

The victory, coupled with a San Francisco win over Houston later in the afternoon and Green Bay’s thrashing of moribund Minnesota Sunday night, propelled the Eagles back into the postseason for the fourth time in five years after an inauspicious 2-5 start to this season.

McLeod’s interception came just three days after the anniversary of his surgery in December of 2020.

“It’s still on my mind,” McLeod admitted after securing the contest and perhaps the season for the Eagles. A loss would have made the postseason very precarious leading into a now relatively meaningless Week 18 game against the talented Dallas Cowboys.

“I’m still trying to get myself back to the level of play where I was last year, honestly,” McLeod said. “But it feels good to be able to come out these past two weeks and make huge plays for the team, and I think it’s just credit to a lot of the hard work that I put in.”

Any time you hit 30 in the NFL, especially as a defensive back, you can see Father Time in the rear-view mirror approaching, and McLeod admitted to some doubts coming off what was his second ACL tear in three years.

“Everybody lifted me up in the time that I needed it the most so it feels good to be able to do this for a lot of people that I care about,” he said.

Everything hasn’t been smooth sailing for McLeod this season. The secondary struggled early, and he and his one-time college teammate’s (Anthony Harris) expected reunion on the back end was crashed a bit by the improving play of the younger Marcus Epps.

As the stakes grew higher, however, defensive coordinator Jonathan Gannon has defaulted to keeping the veterans on the field as much as possible. On Sunday against the WFT, McLeod played 57 of 63 defensive snaps (90%), Harris played 54 (86%), and Epps was at 17 (27%).

It was Harris who played Washington tight end John Bates brilliantly underneath, forcing Taylor Heinicke to try to loft the football over the top, which resulted in McLeod’s opportunity in center field.

“I knew I caught it once I secured it really,” McLeod explained of his game-winner. “That was the biggest thing. I let one slip away first time we played them. So wanted to just make sure I closed this game out the right way. It felt good to be able to finish the game and make a big catch, play for this team. Gotta give credit [to] my guy [Harris] for having great coverage and affecting that throw.

“I was able to capitalize on that.”

“He won us the game,” star right tackle Lane Johnson said of McLeod. “It wasn’t looking too good for us. I saw where he sailed it and the first thought [is] it may hit the ground, and when I saw the replay, he caught it. That’s a testament to Rodney overcoming injuries and a lot of adversity he’s had to face, and he’s one of the few guys that’s come through and still be able to play at a high level and still be a leader.”

“To see Rodney make the catch he made in the situation coming off the deep safety, the quarterback throws it a little high and to make a diving catch and catch it with straight hands as a safety, I have a lot of respect for him,” said Hurts. “I was so excited for him to make a big-time play like that. Probably one of the best catches of the year for this team.”

The recent success has McLeod feeling like his old self again with more football to play.

“I’ve seen growth within myself throughout the course of this year from week to week. I’m just seeing the fruition of it,” McLeod explained.