Eagles Pass Rush Is Better Than You Think

Sacks are an antiquated way to measure an NFL pass rush, and the Eagles are doing just fine pressuring quarterbacks despite generating only 19. 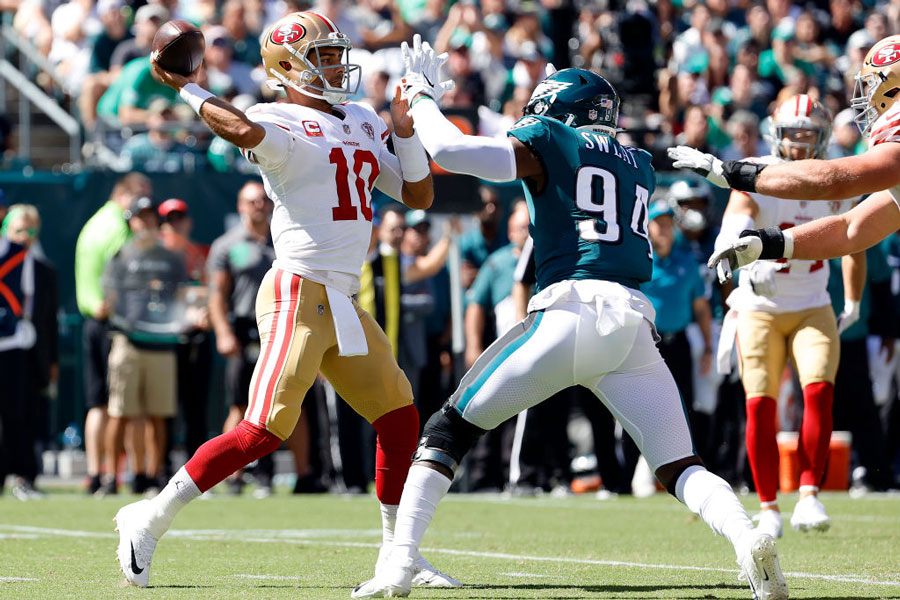 The Eagles rank near the bottom of the NFL with 19 sacks, a number that only three teams haven’t reached: Seattle, Detroit and Atlanta.

For a franchise known to get to the quarterback in an industry where sacks generate Pro Bowl berths and contract spikes, the sizzle is often regarded as far more important than the steak.

The defense’s pressure numbers — things like hurries and quarterback hits — are far more impressive than the sack number, according to Jonathan Gannon, however.

“You look at it in totality,” the Eagles defensive coordinator explained when asked how he evaluates his pass rush. “Like in passing situations, are you affecting the quarterback in a positive way for us?”

There are many ways to do that, of course, and a sack is never a bad thing for a defense. But perhaps the 2018 NFC Championship Game against Minnesota is the best example of the other ways for the Eagles. Had Chris Long simply sacked Case Keenum, instead of hurrying the QB and forcing a bad throw that Patrick Robinson took to the house, the result would have been a Minnesota punt instead of a thunderous roar that shook the stadium and was heard across the Delaware River in South Jersey.

The former is a nice defensive series. The latter stole the heart of a favored team resulting in a blowout win en route to a Super Bowl LII victory.

Gannon was on the field that day as the assistant defensive backs coach for the Vikings.

“There’s no one that wants sacks more than the D-line and us because those are some splash game-changing plays,” Gannon said. “It’s a way to get off the field on third down. It’s a way on first and second down to put them behind the sticks, and you’re always trying to get them to known pass situations.”

The pass rush isn’t defined by that number, though.

“… I don’t think just measuring sacks is a good measure as far as how’s your defensive line affecting the game,” Gannon continued. “So I think they’re doing a good job. Yeah, hopefully, we get some more production with sacking the quarterback at times and there’s a lot of different ways to do that.”

Gannon preaches a disciplined pass rush with his scheme. The goal isn’t for the line to pin its ears back and get to the QB at any cost especially with the proliferation of movement-based QBs around the league like the Eagles’ own Jalen Hurts.

If you lose your lanes when going after Hurts and don’t get home, you’ve just surrendered an explosive running play.

“Daniel [Jones] is a good one [as well] — he will gut you if you do not rush in a disciplined way,” said Gannon. “When you’re playing coverage, certain coverages, you don’t have a lot of guys looking at him. If he creases you because somebody gets out of their rush lane or you don’t balance the rush the right way, or even with pressure, it’s how the pressure gets balanced, those end up being explosive plays.”

To Gannon, the pass rush is a cocktail of things ending with efficacy.

“There’s definitely a blend of, ‘Hey, cut your ears back and go and beat your guy. Oh, but by the way, you can’t end up on this side of the center,’ you know what I mean? Or for ends, turning the corner is great, but if it comes in and it’s 13 yards, that’s no good for anybody,” explained Gannon. “There’s always a blend of winning your 1-on-1 matchup in a disciplined way when we’re four-man rushing.”

“Four equals one. They have to be cognizant of their rush lanes.”

The advanced numbers shine much more brightly on the Eagles than the antiquated notion of sacks being the be-all, end-all for defensive linemen

In ESPN’s Pass Rush Win Rate metric, for instance, the Eagles defense is No. 2 in the NFL at 53% behind only the Los Angeles Rams and their Aaron Donald-led front.

It will likely surprise most Eagles fans that Derek Barnett is No. 2 among edge players in the same metric behind only Cleveland superstar Myles Garrett. Maybe even a bigger surprise is that Josh Sweat is tied for No. 3. Inside Javon Hargrave is second to Donald and Fletcher Cox is No. 6 overall so all four primary defensive linemen in Philadelphia are top 10 in Pass Rush Win Rate.

“I think our d-line is doing a good job with that, affecting the quarterback in a positive way,” Gannon said. “From my standpoint, it’s always looking at, ‘How can we set it up a little bit better? What looks do we need to give? How can we change the picture on the quarterback, where you’re forcing protection adjustments?’ I think that all bleeds into our guys having success.”