The 2021 Eagles defense is not the worst in team history. In fact, it's better than the 2020 version so far. 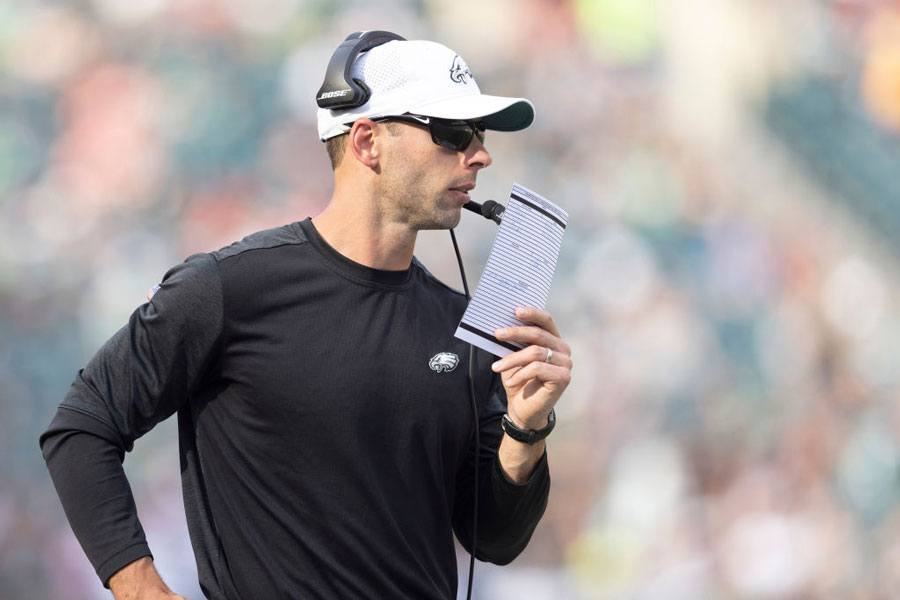 It’s not that Jonathan Gannon enjoys the 7-on-7 drills that have too often resembled NFL games for the Eagles defense this season.

Five quarterbacks — Dak Prescott, Patrick Mahomes, Tom Brady, Derek Carr, and now Justin Herbert — have completed at least 80 percent of their throws against Gannon’s stop unit this season with Teddy Bridgewater, who is over 70 percent for the season, next on the docket in Denver.

“Everything that we do on that field and the completion rate, it’s like, I’m a DB guy. Like, ‘Man, 80 percent completion. That’s not great,’” the embattled Gannon acknowledged on Tuesday.

The goal of Gannon’s defense at this stage is to limit explosive plays in the passing game, something he again iterated while answering a litany of questions trying to get to the bottom of why it’s been so easy to complete passes against his defense.

“The quickest way to get beat is get the ball thrown over your head,” Gannon explained. “So, that’s always in my mind when we set up the [game] plan, how many chances are they going to take to where we’re not in a great coverage versus those shot plays.”

From Gannon’s viewpoint teams with QBs that can handle things at the line of scrimmage have been getting the ball out quickly for two reasons: the reputation of the Eagles’ defensive front, and the realization that Philadelphia is going to limit those “explosives” as Gannon calls them.

In other words, they are taking the easy completion.

“I think, one, personnel driven, who we have with the front, I think teams are very aware our D-line can rush,” Gannon answered when asked why offenses are attacking the way they are. “And the other thing is, because we are set up to take away some explosives, they say, ‘Okay, well, in these certain plays, by the look, pre-snap, if the explosive isn’t there and you know it’s not there, get it out of your hand.’”

“So, that goes into us setting the plan up better to say, ‘Hey, let’s either not show those looks or change the picture pre- and post-snap to the quarterback. Or be a little more aggressive at times how we tighten up on people.’”

It’s about marrying pass rush and coverage which is always a delicate balance.

“You saw some six, seven-man protections [in the 27-24 loss to the Chargers],” Gannon noted. “So, typically when you see that as a defense, you devote more to coverage. You put more in coverage knowing that pressures aren’t going to get home and you’re kind of leaving your cover guys out to dry.”

When the success isn’t there, however, tweaks need to be made.

“I think I can set it up a little bit better when teams are doing that, just be a little more creative how we are aligning our pieces and what we are doing to generate more pressure, so teams can’t say, ‘Hey, this is what we’re going to do so you have to play a certain way,’” said Gannon.

The goal is to dictate rather than be dictated to.

“We can dictate a little bit more just with the plan, how we set that up to where teams can’t always dictate that,” Gannon said.

Personnel, though, is the biggest part of everything. In Minnesota Gannon was a part of defenses with players like Anthony Barr and Harrison Smith. In Indianapolis, it was a LB like Darius Leonard.

The Eagles simply don’t have pre-snap pieces that can move like those players, something Gannon alluded to without throwing his current players under the bus.

“You can [use pre-snap disguise]. But, when you do that, we always – you know, ‘What is this look, this look with this call, what do you want to show?’” Gannon explained. “Way back when, when you’re studying different disguises and things, right, a team — we did it at Minnesota [Smith]– a team that has a safety on the line of scrimmage, well he plays in a deep post after the ball is snapped. And I always thought to myself — I got this from the players, they would say, ‘JG, that’s all cool and everything, but I have no shot to make any play in the middle of the field because I’m coming from the line of scrimmage. So, the disguise is great, but you’re really hamstringing me to be able to make plays.’”

“So, there’s a blend of how much you can tilt the coverage and disguise and make it look really different on the quarterback pre- and post-snap with also getting your guys in position to get what they need to get done within the call.”

Right now the Eagles defense is a work in progress.

The perception of poor performance, though, is greater than the reality of context.

For all the hand-wringing the Eagles are 15th in a 32-team league in total defense and 20th in scoring defense entering Week 10, hardly where they want to be but also far from the over-the-top hysteria that has ramped up this week. Go back to last season’s Eagles defense and you have improvements in both yardage allowed [363.1 to 355.3] and points allowed [26.1 to 24.2).

“Wins and losses” is all that matters to Gannon, though, and that hasn’t been up to snuff.