The Eagles Needed to Clear the Path for Dallas Goedert

The Eagles’ trade of Zach Ertz was about more than a Day 3 draft pick and a young cornerback. 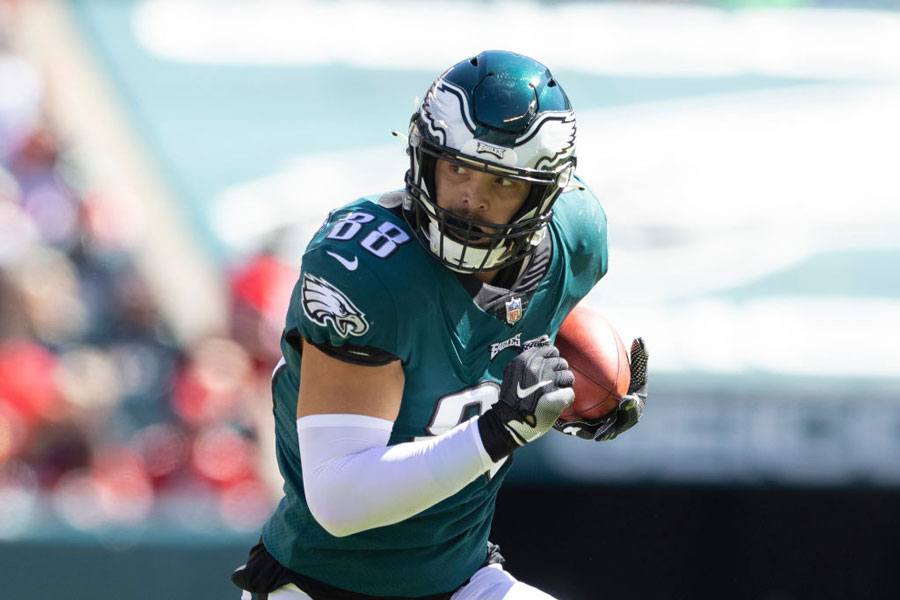 Dallas Goedert runs with the ball against the San Francisco 49ers at Lincoln Financial Field on September 19th. / Photograph by Mitchell Leff / Contributor via Getty Images

The Eagles understand what they have in Dallas Goedert, but, perhaps more importantly, they understand the NFL as a whole knows what Philadelphia has in the fourth-year tight end.

Goedert was perhaps the most logical candidate for a contract extension before the 2021 season started, but, unlike Jordan Mailata and Josh Sweat, there weren’t going to be any team-friendly deals from the organization’s perspective.

“In terms of our bargaining power, there’s going to be no discount on Dallas Goedert,” GM Howie Rosman explained after trading veteran TE Zach Ertz to Arizona late last week for a 2022 fifth-round pick and rookie cornerback Tay Gowan.

While Ertz is an all-time franchise great, Goedert is the franchise’s future, and it was finally time to pull the ripcord on that end game.

“I think it’s become pretty clear to us that going forward we weren’t going to be able to have both those guys,” Roseman admitted. “They’re both free agents at the end of the year. And it gives us an opportunity for Dallas to step up and be that number-one guy, [to] really have that opportunity for the first time in his career and play a lot. It gives him the opportunity also to put his stamp as a leader on this team.”

For the first time, Goedert had usurped Ertz as the TE1 of the Eagles this season, playing 68 percent of the offensive snaps over the first five games of the season before missing last Thursday’s loss against Tampa Bay on the Reserve/COVID-19 list. Ertz was close in playing time, though, playing in 56 percent of the snaps.

Add in Nick Sirianni’s preference for 11 personnel (three receivers) and a quarterback in Jalen Hurts, who doesn’t feel comfortable throwing the ball in between the hash marks, and that meant, more often than not, it was Goedert or Ertz on the field, limiting the playing time and production for both.

Goedert has 15 receptions for 214 yards and two touchdowns through those first five games and has been graded as the 11th best TE in the NFL by ProFootballFocus.com to date. Ertz, meanwhile, is No. 33 as he prepares for his first game with the Cards.

Goedert’s camp understands his numbers would spike in a different system that allowed him to play more and had a high-volume passer, something that has been communicated to Roseman and the Eagles, according to an NFL source.

The bigger point to that is it’s pretty clear that the league would not hold Goedert’s somewhat pedestrian numbers against him if by some miracle that the 26-year-old did hit free agency next spring, a sentiment that spawned Roseman’s “there’s going to be no discount on Dallas Goedert” quote. Clearing Goedert’s path to more playing time and production was a big part of the Ertz move.

“There’s no secret that that’s, obviously, something here going forward that we have to address. And so, getting him in a role where it’s not just sharing time and he’s the guy [was important],” Roseman admitted. “So, we know that, so we want to get as much information and give him as much opportunity to take over that and see him in that role as much as possible, as opposed to guessing on it.”

Head coach Nick Sirianni also hinted at the end game when it comes to making Goedert a little happier.

“If you take all Zach’s targets and all Dallas’ targets and you put them into one, you’ve got pretty impressive stats right there,” Sirianni noted, referencing the combined 33 receptions for 405 yards and four touchdowns the two TEs currently have. “That would be up in the tops of the league with the tight ends.”

Money and production are what’s desired. There will be no discounts with Goedert and the Eagles.