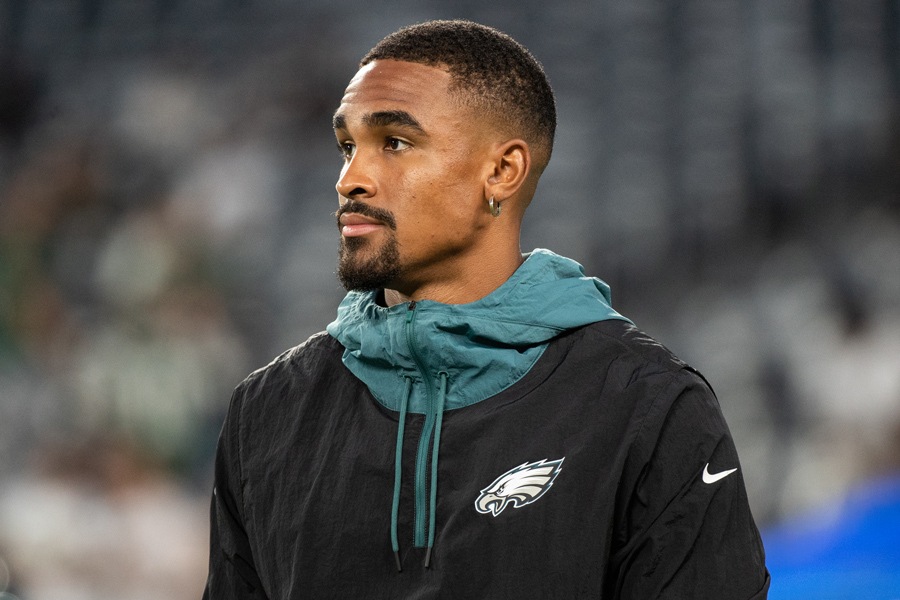 Jalen Hurts before the start of a preseason game against the New York Jets on August 27, 2021. Photograph by Dustin Satloff/Stringer via Getty Images

There’s nothing quite like high-school football in Texas, and Jalen Hurts lived through those famed “Friday Night Lights” in Channelview, a suburb about 20 minutes outside of Houston. Since those days, the Eagles’ second-year quarterback has played in front of the most passionate fans on both the college and professional levels. Yet the biggest stages that football can provide have always seemed terribly ordinary for a player defined by the quiet, almost dignified calmness cultivated in the heat of South Texas.

The National Championship Game at Alabama, the College Football Playoffs with Oklahoma, and replacing Carson Wentz at the cathedral of football, Lambeau Field in Green Bay, were just days at the office for the now 23-year-old Hurts.

An old soul in a Gen Z body, Hurts has a pulse that never seems to spike no matter the circumstances.

Most of that can be traced back to Channelview High School, where Hurts developed into the District 21-6A MVP under his father, Averion, en route to becoming a four-star recruit chased by the best college program in the country.

When thinking about the future and what it might hold for Hurts in Philadelphia, the young signal-caller couldn’t help but reminisce about his past. “I’m just excited for the opportunity,” he told Philly Mag last week. “Another year to text my brother, text my dad. Last week was the first week of high-school football in Texas. They both got wins.”

For Hurts, the genesis of his football life is what fuels him forward. “I texted [my dad] last week and said, ‘Hey, this is another year we get to do what we love, you know? This is another year where we’re around the game of football,’” Hurts explained. “We love this game so much, so I’m sending [them] my best wishes, and I think that’s how I feel right now. I’m thankful for that opportunity to play this game, and I’m excited for what’s to come.”

That excitement is being shared with his young playmakers in Philadelphia, a trio of receivers who are expected to grow with Hurts moving forward. The group includes first-round rookie DeVonta Smith, who played with Hurts at Alabama, and two second-year wideouts — Jalen Reagor and Quez Watkins — players who arrived in Philadelphia in the same 2020 draft class as Hurts.

Hurts’s ability to connect with his teammates shouldn’t be overlooked when measured against rookie head coach Nick Sirianni’s core values. Number one in Sirianni’s five-point ethos is connection, something that seems natural for Hurts but was actually cultivated under those “Friday Night Lights” in South Texas.

“[Former NFL QB] Philip Rivers says something about the value of high-school football, and I think it’s very, very true,” said Hurts. “Those are times that you’ll never get back. The kids you grew up with, the kids you matured with, and you go out there on those Friday nights where you play for a prideful town, a prideful school. You have your neighborhood rivalries or whatever, but great memories. And I mean, in Texas — it doesn’t get any bigger than Texas high-school football.”

When measured against that, everything else might be a walk in the park for Hurts.