Left tackle Jordan Mailata sprained his knee in practice on Thursday and isn’t expected to play Monday night in Dallas. 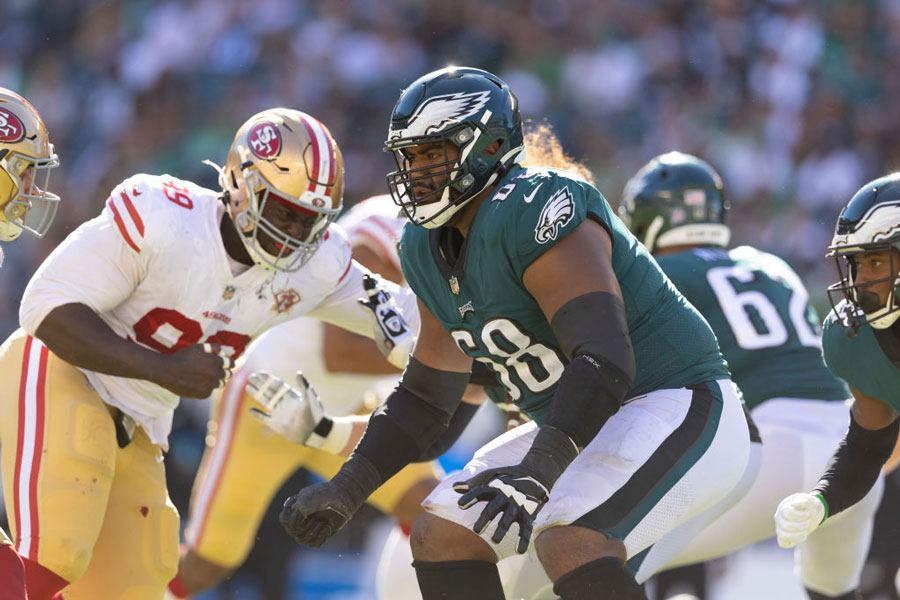 Jordan Mailata in action against the San Francisco 49ers at Lincoln Financial Field on September 19, 2021. / Photograph by Mitchell Leff via Getty Images

Hall of Fame coach Bill Parcells always had a few words of advice for his assistants who made it to the big chair in the NFL.

“I always told all my coaches that things happen in football every day that you wish wouldn’t happen,” Parcells explained in his enshrinement speech. “And if you don’t have the mentality to deal with that, you need to get out of the business.”

Nick Sirianni had one of those moments Parcells described at the end of practice on Thursday, when the rookie coach’s promising and recently enriched massive left tackle was accidentally rolled up on by a teammate, according to a league source. Mailata was able to finish the session, but he told the training staff his knee was ailing. Further evaluation revealed a sprained knee for the six-foot-eight, 380-pound Aussie.

While Mailata’s injury isn’t considered serious, the timing means the big man won’t be protecting the blind side of Jalen Hurts on Monday night in North Texas against the Dallas Cowboys. Former 2019 first-round pick Andre Dillard is the next man up for the Eagles, and he was practicing combo blocks with Isaac Seumalo under the tutelage of offensive line coach Jeff Stoutland on Friday.

Complicating things further for Stoutland is the fact that the Eagles were already planning on the first NFL start for rookie right guard Landon Dickerson as an injury replacement for All Pro Brandon Brooks (strained pec).

Dillard, of course, lost a summer competition to start at left tackle with Mailata while dealing with a hand injury and then a sprained knee of his own. The injuries cost the Washington State product a couple of weeks in the middle of a revolving rotation in which each candidate would work with the first team. Dillard’s knee injury was the end of the competition, although Mailata had outplayed his more-pedigreed teammate in advance of the decision.

The Eagles then doubled down on the path forward, signing Mailata to a contract extension through 2025 that could give him $80 million if he sees the end of the deal. It would guarantee the emerging star more than $40 million.

“Andre obviously got injured during camp, so that kind of hurt him,” Stoutland said last week. “He was doing well. I really mean that. He was doing well. I was very happy with some of the things that he was doing. Then he got hurt, and it became like, Oh man, here we go again.”

The “Here we go again” tagline could also be directed at the Eagles’ offensive line as a whole now that the team is down two starters in Week Three, a year after the organization was forced to start an NFL record-setting 14 different offensive line combinations in 2020.

Through the first two weeks, Mailata had been playing like one of the best left tackles in football, graded by ProFootballFocus.com as number two in the NFL behind only San Francisco superstar Trent Williams after a week in which the project-turned-producer shut down Williams’s teammate Nick Bosa, one of the best edge rushers in the league.