Landon Dickerson’s first taste of NFL action didn’t go the way he would like, but the rookie isn’t making any excuses. 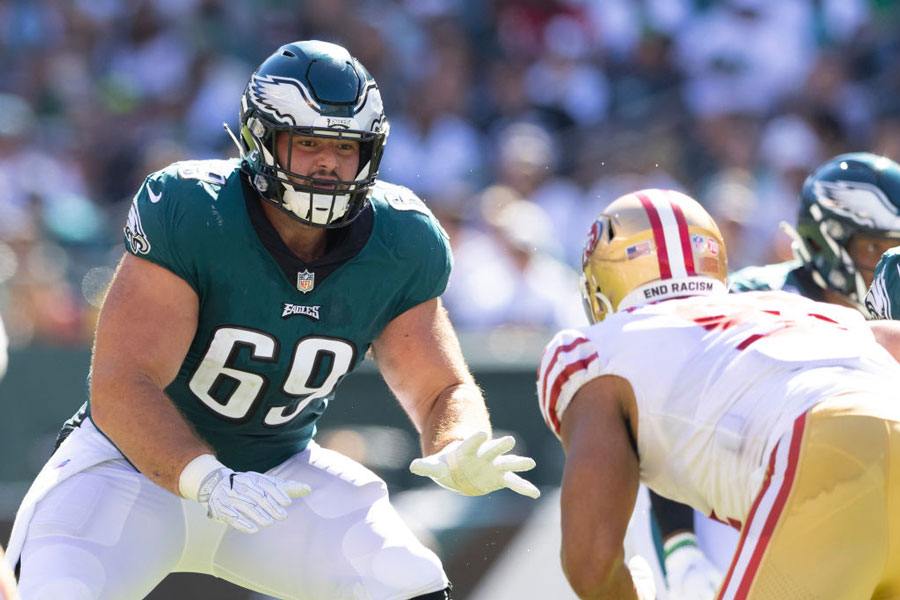 Landon Dickerson in action against the San Francisco 49ers at Lincoln Financial Field on September 19, 2021. / Photograph by Mitchell Leff / Contributor via Getty Images

Pressed into action due to Pro Bowl right guard Brandon Brooks’s strained pec, Dickerson had his welcome-to-the-NFL moment on his first play, when the six-foot-six, 330-pound rookie was put on skates and nearly deposited into the lap of starting quarterback Jalen Hurts.

Hurts persevered, however, and turned potential disaster into a 91-yard gain to Quez Watkins. It was a big play that the Eagles didn’t cash in on during a 17-11 setback, and one where Dickerson didn’t take solace in a teammate picking him up.

“My play was not up to the standard we’ve set here,” Dickerson admitted following a Thursday practice chased indoors by heavy rains in South Philadelphia. “I wasn’t happy with the way I played, so that’s been the focus of this week — correcting all the mistakes I’ve had and what I need to work on.”

Earlier, head coach Nick Sirianni confirmed that Dickerson would make his first NFL start at Dallas despite the pass-protection difficulties he had against San Francisco, eschewing the opportunity to shift toward the more experienced Nate Herbig, who provided yeoman work in 2020 when forced into action due to injuries.

“It’s going to be Landon,” Sirianni said when asked by Philly Mag who would start on Monday night against the Cowboys. “But Nate’s got to be ready, just like he was last week. To be ready to go in, if anything else happens. … [San Francisco] was a good learning experience for Landon. I know he made the corrections, and he’s looking forward to getting out there practicing [Thursday] to get better.”

Dickerson has already gotten a feel for Cowboys week, since Sirianni made sure each player got a “Beat Dallas” t-shirt and everyone was shown film of the rivalry to key the coach’s younger players on what this game really means to Philadelphia.

“I’ve been familiar with it,” Dickerson said of the rivalry. “Obviously not firsthand, but being in this building, and seeing the way guys carry themselves this week and how we prep for this game — it’s an important game around here.”

Dickerson played the final 33 offensive snaps against the 49ers, and it wasn’t all bad, according to the North Carolina native. “It was my first game at the stadium,” he said. “That’s one thing to enjoy.”

Dickerson, however, who was schooled at Alabama and is used to a high standard of success, quickly pivoted back to the mind-set of getting better. “I can sit here and give you excuses all day, but I believe excuses breed mediocrity, so there’s no reason for me to sit up here and tell you this was the reason I did this, that, X, Y, Z,” he explained. “Just evaluate what I did and fix it.”

All Pro right tackle Lane Johnson, who flanks Dickerson on the right side, was more understanding and expects success moving forward. “He’s usually playing center, so he’s had to adjust to guard,” Johnson said. “Last week, he was out there on the fly. This week, he’ll have a full week of practice and probably feel a lot more prepared than last week. That goes for both of us as far as me communicating with him and getting our calls down.”

Dickerson agreed that prep during the week with the ones should make a significant difference. “It does help quite a bit,” he admitted. “Every player is different. Every guy plays at a different speed from footwork. Everybody gets the job done, but it gets done a little differently depending on each guy. It’s really just a process of them getting to know me and making that combination work.”

Even without Brooks, Cowboys coach Mike McCarthy is concerned about dealing with the Eagles’ O-Line as a whole, which will have a significant size advantage over the undersized Dallas pass rush that will feature athletic Penn State rookie Micah Parsons.

“It’s a huge challenge against this massive offensive line,” McCarthy said during a conference call. “That’s our approach to it. Had an opportunity to see Landon Dickerson step in there. We were very high on him coming out of Alabama. I have a lot of respect for their offensive line.”