The mayor also went off script to compare the tensions of 2017 to the upheavals of 1968. 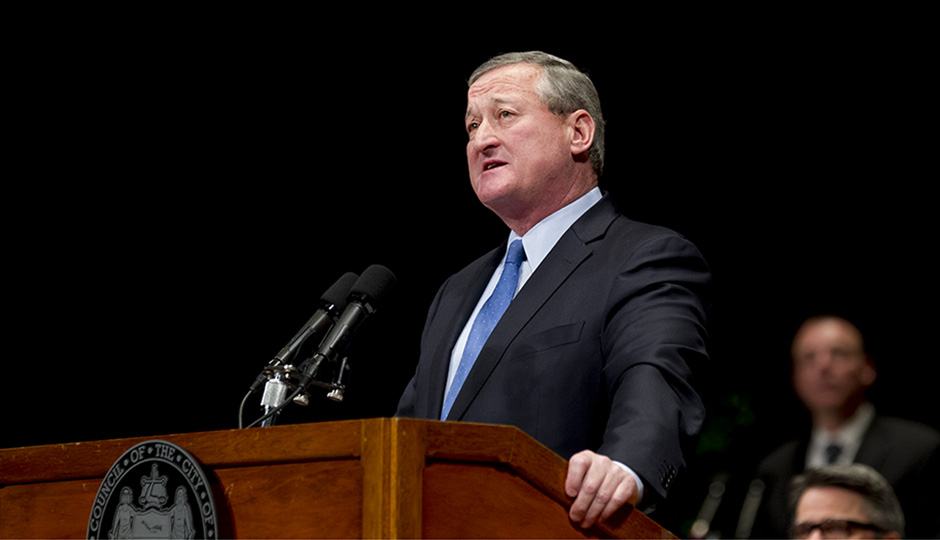 Mayor Jim Kenney unveiled his budget today in an address to City Council, calling on more funding to fight poverty in the nation’s poorest big city.

“Currently, of the top 10 major U.S. cities, Philadelphia ranks first in poverty and last in job creation,” Kenney said during his speech. “We will only reverse those rankings when we provide all our residents with the basic tools they need to be employable and when we create family-sustaining jobs to employ them.”

To do this, Kenney proposed more funding that would double the number of homes that Health Department inspectors visit each year (to fight lead poisoning), hire 10 more attorneys at DHS (to cut down on caseload work by 30 percent), and increase stipends for foster parents (from $21 a day to $36 a day).

One day after Pepsi announced that it would lay off up to 100 workers at its local plants, Kenney also used his speech to defend the soda tax. He said it has paid for 2,000 free pre-K seats and created more than 250 jobs for pre-K providers. He spoke about a Philadelphia father, Eric Grant, whose daughter Makayla enrolled in the city’s free pre-K program this year. Previously, Kenney said, “because of the cost of the daycare and pre-K, Mr. Grant had to stay home, while his wife went to work … to watch the children. So now when Mr. Grant dropped off Makayla at pre-K, he went to a job interview at the post office. He is beginning orientation on Monday in his new position. This effort has freed up families to go out and continue to work and to earn more money.”

Kenney also reflected on the state of the nation on Thursday. Speaking off script, he said that 2017 reminds him of 1968. “When I was 10 years old in South Philadelphia, it was the height of the Vietnam War. The Tet Offensive had started. Dr. King and Bobby Kennedy had been assassinated. There was an election with Richard Nixon, Hubert Humphrey, and George Wallace. The kids in our our neighborhood, people who were a little bit older than Mark Squilla and myself, were coming back in flag-draped coffins. One was my cousin. The neighborhood was torn apart. Parents were fighting their kids about the Vietnam War. People were marching in the streets to obtain the rights that were guaranteed in the Constitution that were never provided. People were at each other, and scared of each other, and angry.”

But, he said, there was a silver lining to that era: “We got through 1968 as a nation, as a state, as a city. We can get through anything if we have each other’s back, stick together, show love and affection and care for each other, and march forward into the future together.”

During his speech, Kenney also proposed more funding to fight homelessness and opioid addiction. He proposed that the city support 83 units of rapid rehousing and supportive housing and increases the distribution of naloxone, especially in Kensington. He also wants funding to “educate” doctors on opioid prescribing and create a real-time database of openings at treatment facilities.

The mayor called for increased investment in parks and other recreation centers as well. In addition to the park over I-95 connecting Center City with the waterfront, Kenney wants to invest in parks in the city’s neighborhoods.

“I am confident that through this ordinance we will be able to finalize a program that is open and transparent, invests in our most underserved neighborhoods, enhances growth, promotes diversity and economic opportunity, includes long-time community members, and leverages the expertise and efficiency of partners in our nonprofit sector,” he said.

Kenney also laid out a number of programs that would target the city’s more underserved neighborhoods. He also wants $30 million for SEPTA, $170 million in road repaving that “will allow our city to finally meet national standards,” and dedicated additional funding for Vision Zero, the attempt to create fatality-free transportation.

The mayor also wants to outfit all Philadelphia Police officers with body cameras by 2021, invest more in the Fire Department, and create a “holistic” violence-prevention strategy. His budget also adds in recommendations for L&I created after the building collapse at 22nd and Market, as well as proposes pension reform: Kenney’s plan says it would get the pension fund 80 percent funded in 13 years. He said AFSCME District Council 33 has already accepted this “stacked-hybrid model.”

“I wish there were more investments that I was able to share with you this year,” Kenney said. “But Philadelphia’s ability to fund even basic services will continue to be hampered until our pension fund is healthy, we double our economic growth, and we significantly reduce our poverty rate.”