He's been behind the mic since 1972 (!!!) making him the longest-tenured public address announcer in all of baseball. 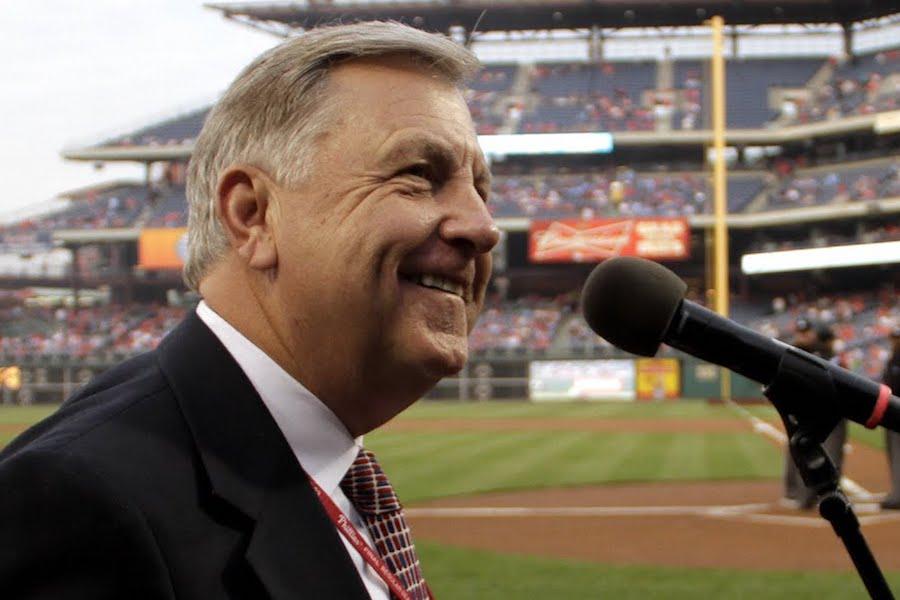 If you’ve been to a Phillies home game any time since Richard Nixon was elected President of the United States, then you’ve no doubt heard the voice of Phillies public address announcer Dan Baker. He’s the guy who asks you to rise for the National Anthem, who introduces starting lineups, batters and visiting dignitaries, and who may just be the most enthusiastic Phillies fan we’ve ever met. We caught up with him to talk Veterans Stadium, South Philly Italian food and, of course, Bryce Harper.

One important lesson I’ve learned is… give it your best shot and let things fall where they may.

I went to college at… Glassboro State, which is now Rowan. And then I taught elementary school in South Philadelphia public schools for twelve years, from 1968 until 1980.

I would describe my job with the Phillies as… the best job in the world.

The first Phillies game I ever attended was… in 1954 with my father at Connie Mack Stadium.

When I interviewed for this job… I told Bill Giles that I would be the quickest and most accurate at this job in all of baseball. Back then, the public address announcer also had to operate the in-progress scoreboard. You needed to be very focused. I told Mr. Giles that I used to lie in bed at night keeping track of balls and strikes on my fingers while listening to the Phillies games on the West Coast. We’ve all had job interviews where we’ve done well and others where we’ve done not so well, and this was my best.

Phillies fans are… passionate and loyal.

I may be best known for… the way that I introduce the National Anthem, the way that I say, “Please stand and help us honor the United States of America.” I try to say it as patriotically as I can, and I think that’s something people recognize about me.

I love my job because… I’m simply so excited to watch the Phillies and root for the Phillies with all of my heart. It’s a joy for me to come to the ballpark every day. I’m energized every time I come in. That was true in 1972 and it is true 48 seasons later.

Veterans Stadium was… where I met my wife, Cathy, who worked in sales and marketing until 1980, when our son was born — the same year the Phillies won their first World Series. My daughter was born in 1983, when the Phillies next went to the World Series. Mr. Giles said we needed to keep having children.

One of the many perks of this job that I enjoy is… the food in the media dining room. I love Italian night when they have pasta. They have terrific food. I could eat Italian every night of the week. My wife and I love Marra’s, Pesto, Villa di Roma, Ralph’s, and Scannicchio’s at Broad and Porter.

My favorite versions of the National Anthem… have tended to be those from anthemists with an operatic background, like Robert Merrill from the New York Metropolitan Opera. I also introduced Taylor Swift before a World Series game in 2008. The Broadway singer Kristin Chenoweth is very diminutive but my goodness, what a voice. She can really carry a high note. The Phillies do a great job bringing in singers and groups. Another one that always hits a home run is the Philadelphia Boys Choir and Chorale. Flawless.

Making a living at a job like this is… a dream come true. It is a part-time job, and I’ve always supplemented it with other work. Not that I’m complaining. Believe me. The Phillies have been very good to me. They’ve given me five World Series rings for the five World Series I’ve had the privilege to announce.

People who complain that baseball games have become too long… maybe have too many other things going on. It’s great to come out and enjoy the game. But I understand. I remember when games might get over in two hours or when the average game was two-and-a-half hours. But if you love baseball, it’s really a small inconvenience.

If you’ve never been to the stadium before, I suggest buying tickets in… the Diamond Club or on the Hall of Fame level. It’s very nice. But there are also some great bargains here like the standing-room-only tickets. Just being here for the excitement — the electricity is back. The electricity is palpable.

In a steel cage match between the Phanatic and Gritty, the winner would be… the Phanatic! I love Gritty, too, but the Phanatic is the most beloved mascot in all of sports. That’s still true. This is Gritty’s first year, and the Phanatic has been doing this for many, many years. He’s just beloved.

The biggest change in baseball since I started is… that you rarely see starting a starting pitcher finish a game.

My early impression of Bryce Harper is… wow! The fans just love him. He’s a baseball player. I think he’s gonna hit 40 home runs in this ballpark this season. It’s really special to think that he’s gonna be here for the next 13 years. We have a special city. And this is a special team.