BizPhilly checks in with its 2018 Startups to Watch cohort. Whether they raised funding or launched a new product or program, the young companies have accomplished a lot in just six months. 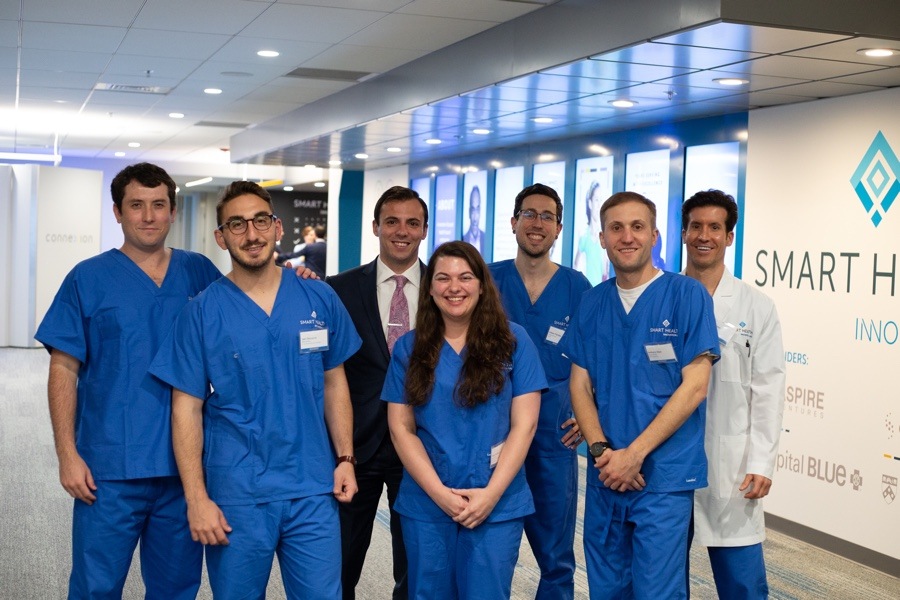 At the start of the year, BizPhilly identified ten of the city’s most promising startups to watch, and in just six months, each company has already made significant gains, whether they added on new team members, won awards, launched a product or program or raised funding. Each startup is still a leader in its industry. Here’s what they’ve each been up to in the past few months and why you’ll be watching them indefinitely: 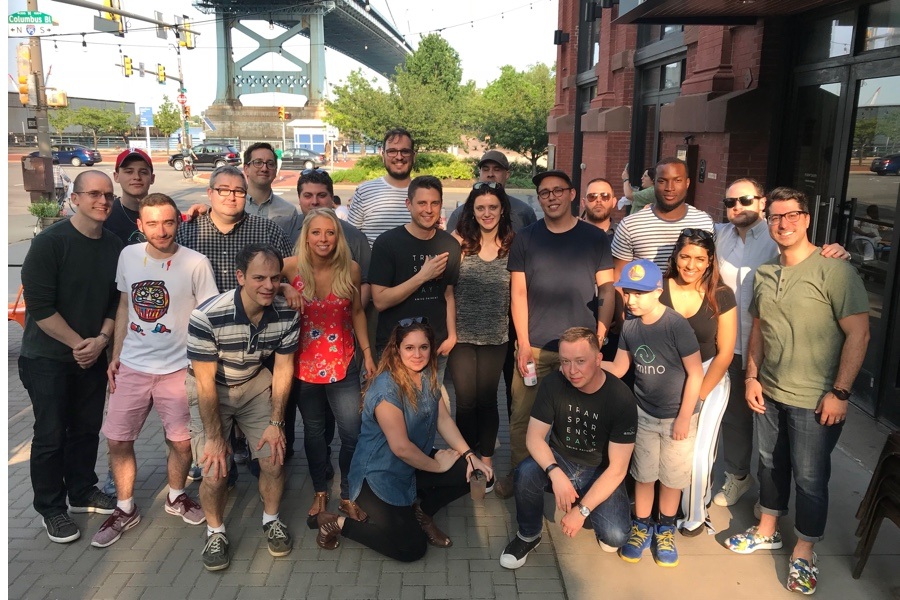 Funding: Shortly after making Philly Mag’s 10 Philly Startups to Watch list, the company raised a $4.5 million seed round led by First Round Capital. Josh Kopelman, the firm’s founder and general partner joined the startup’s board of directors.
Team: The startup has added on three new “Aminions” — Kerri Alamia (office manger), Dave Mullen (senior UI/UX designer) and Josh McLucas (software engineer).
New Business: Major brands like Bayer, T-Mobile and AT&T have announced that they’ve signed up with Amino. “We anticipate many new partners from brands, agencies, adtech and publisher spaces to announce working with Amino this summer,” a spokesperson for the company told Philly Mag. Amino now tracks about $1 million per week in ad spend via its Lens reporting product.
Events: This week the team has made its way to the Cannes Lions International Festival of Creativity for the first time.
Team Spirit: “Cheer us on at PSL Field Day Games!” the company spokesperson said. 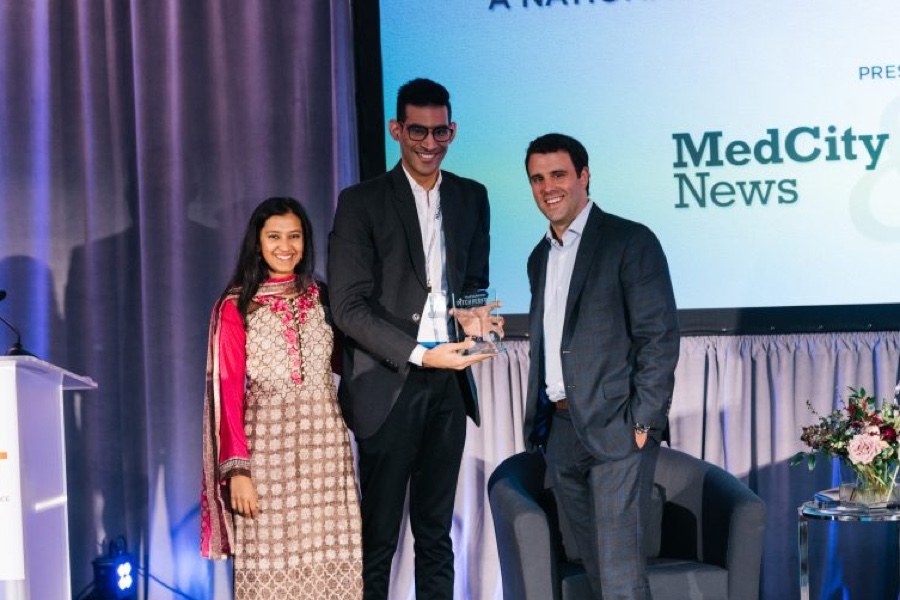 Awards: Keriton has racked up recognitions to start off the year. The startup won four prestigious awards within just 48 hours on May 1. The team took home two gold Stevie Awards — accolades previously won by Apple, IBM, P&G, Dell and others — for Tech Startup of the Year 2018 and Startup of the Year 2018 in the Business Products Industries category. 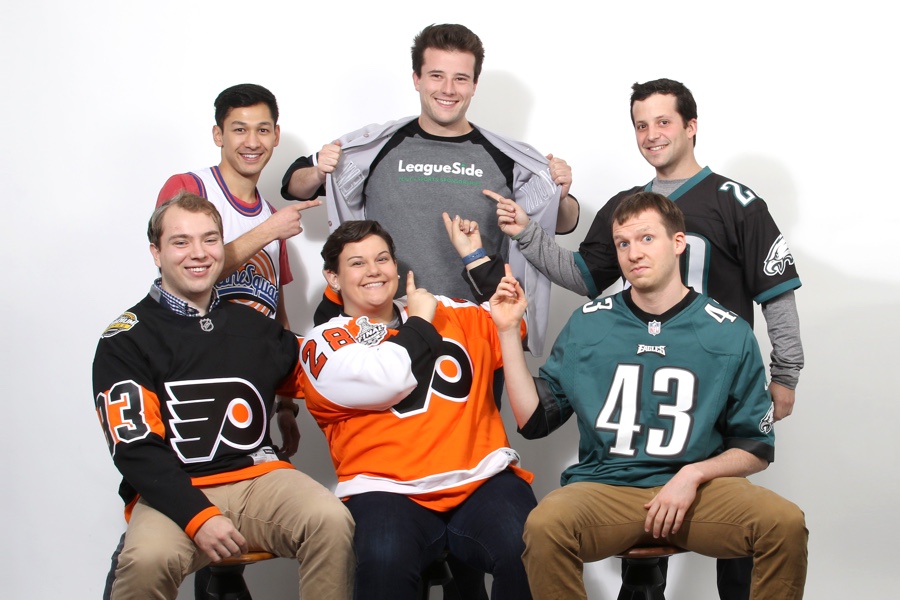 New Digs: The LeagueSide team has grown to 16 and recently relocated to a new office in Center City. “We’re focusing efforts on maintaining current clients, acquiring new business in new business verticals, and building out a scalable partnership platform that makes it easier to sell sponsorships for community youth sports organizations,” the startup told Philly Mag.
Awards: The company was nominated as a PACT Enterprise Awards finalist for the Technology Startup Category in early May.
New Business: LeagueSide has grown its client base to over 45 companies including new campaigns with Uber Eats, Elephant Insurance, and over 20 regional and national healthcare clients.
Funding: The startup recently closed a second Series Seed funding round of $1.1 million, with support from former Philadelphia 76er Elton Brand. The funding is being used to expand the company’s proprietary technology platforms, LeagueSide told Philly Mag.
Up Next: “Over the next few months, we’re on track to grow our regional footprint in the city of Philadelphia by working with more companies in our backyard,” the company said. “Additionally, we plan on validating our new inventory acquisition model, building out our team, and continuing to improve our technology platforms.”

Team: “The past few months have been a whirlwind and very exciting,” Neuroflow told Philly Mag. The company hired a few more people and has grown to 12 full-time employees.
New Business: “We have grown 183 percent Q1 and Q2, bringing us to 75 clinics and hospitals in four countries,” founder and CEO Chris Molaro told Philly Mag. The startup also recently announced a partnership with Smart Health Innovation Lab to get certified to work with Capital Blue Cross and Lancaster General Hospital.
Recognition: The startup was APA’s featured tech talk at the organization’s recent DC conference. And MedTech Boston named it a top five mental health tech company in the U.S. The startup was also voted the most innovative mental health technology at the 2018 Psych Congress Conference.
Year-End Goal: “We’re going to be in 300 clinics by the end of the year, and as the summer wraps up, we are going to complete the certification program gearing up for a full launch with Capital Blue Cross’s 1.7 million members and Lancaster General Hospital,” said Molaro.
High Praise: Dr. Kathy Calabrese, a NeuroFlow client said recently, “I have recently begun to use an interactive program with my clients, one that empowers them to participate more fully in their therapeutic process. The NeuroFlow team embodies commitment to furthering growth and innovating in the mental health field. Chris and Sam are great guys and have inspired me to be a better clinician.” 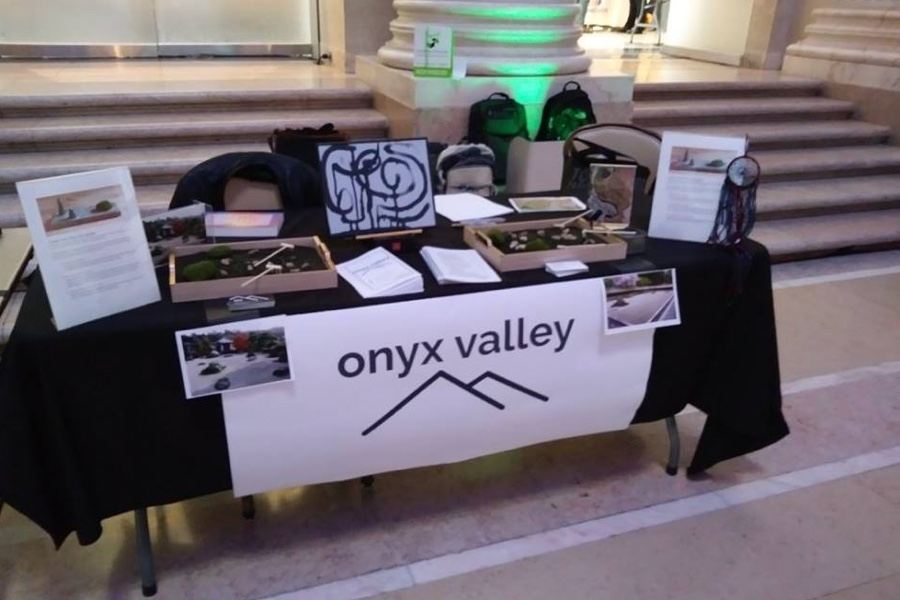 Events: “We have been very active spreading our message about diversity in tech at several engagements and events including Tech Philly Week’s Entrepreneurship Expo and the Fourth Annual Women in Tech Soiree,” founder Kyree Holmes told Philly Mag.
Big Win: Holmes was selected for the Emerging City Champions fellowship, which comes with a grant and support for future Onyx Valley projects.
Next Up: Holmes says this summer they expect to “launch the first project out of Onyx Valley Studios, a student led user experience (UX) consultancy that will undertake solving real challenges for real clients.” Students will be able to address the experience requirements that companies ask for when looking to hire through these projects, which will combine project specific instruction and advising to build their expertise and confidence.
Student Involvement: Onyx Valley is actively recruiting student ambassadors to promote the startup on local college campuses. “We are always looking for more students and volunteers for our events,” said Holmes. “Visit our website for more information if you are interested in getting involved.” 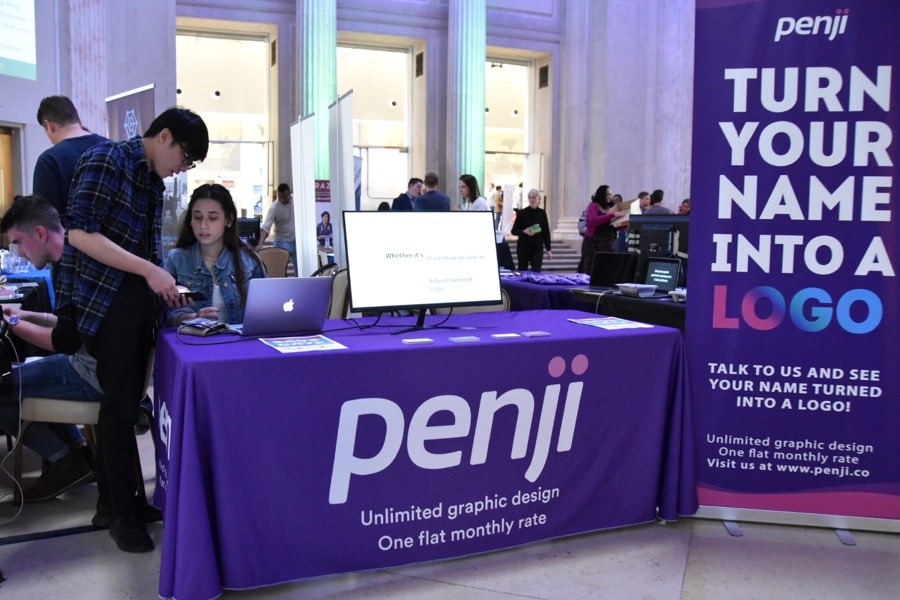 Big Growth: In the past six months, the company says it has almost tripled its revenue and brought on five graphic designers and three marketing assistant interns. They’ve created a customer support team and are planning to expand to a second location.
Funding: “We’ve grown organically without any funding whatsoever. Our agile team has been responsible for building Penji from the ground up, and we’re proud of what we’ve achieved as a small startup that runs entirely on cash flow,” founder Johnathan Grzybowski to Philly Mag. The team had various opportunities to raise capital but walked away each time “to stay true to our community conscious values and people-centric philosophy. We are at a good place within our business, organically growing every month, and operate 100 percent on cash flow from our business,” Grzybowski added.
Next Up: This summer the startup will launch Penji 3.0 and multiple new products for existing customers, all while still offering unlimited graphic design requests for a flat monthly rate of $349 per month. “We’re constantly finding ways to offer more value for our customers and at our core consistently provide exceptional graphic design without compromising quality,” said Grzybowski. “It’ll definitely be a challenging summer, and we’re excited for it.” 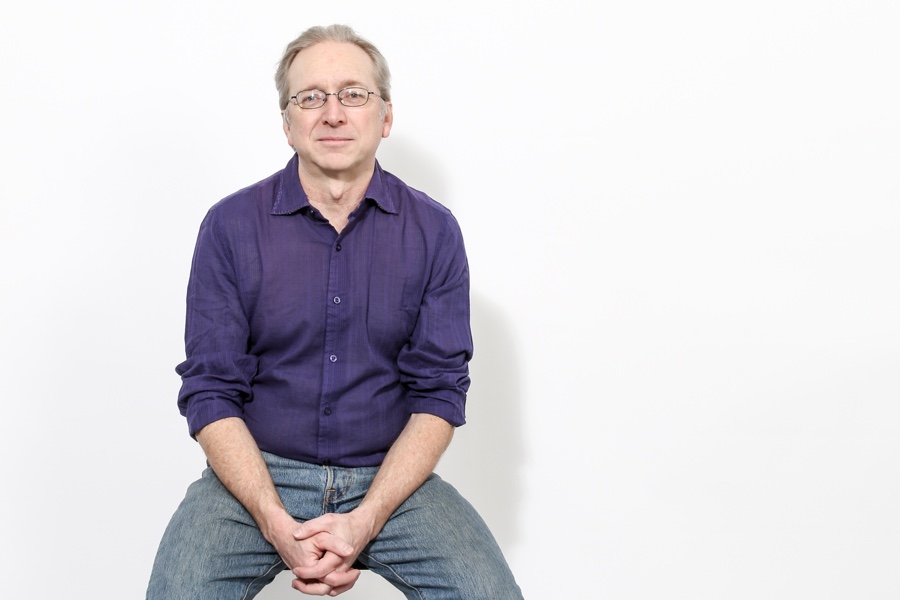 Expansion: “We’re aggressively working to expand our service area and increase the capacity of our current network reach,” founder Mark Steckel told Philly Mag. This includes accelerating the growth of the company’s pipeline of large properties like multiple dwelling units and commercial, developers and property owners. The startup is currently in talks with one of Philly’s largest property management companies.
Grand Feat: PhillyWisper is gearing up to bring its largest multiple dwelling unit online this June. The Fairmount based tower has more than 225 units.
Speed: PhillyWisper is preparing to launch its Gigabit service plan as it accelerates subscriber growth.
Stealth No More: The company is rolling out its first marketing initiatives. They’ve previously been growing exclusively by customer referrals, and word of mouth. 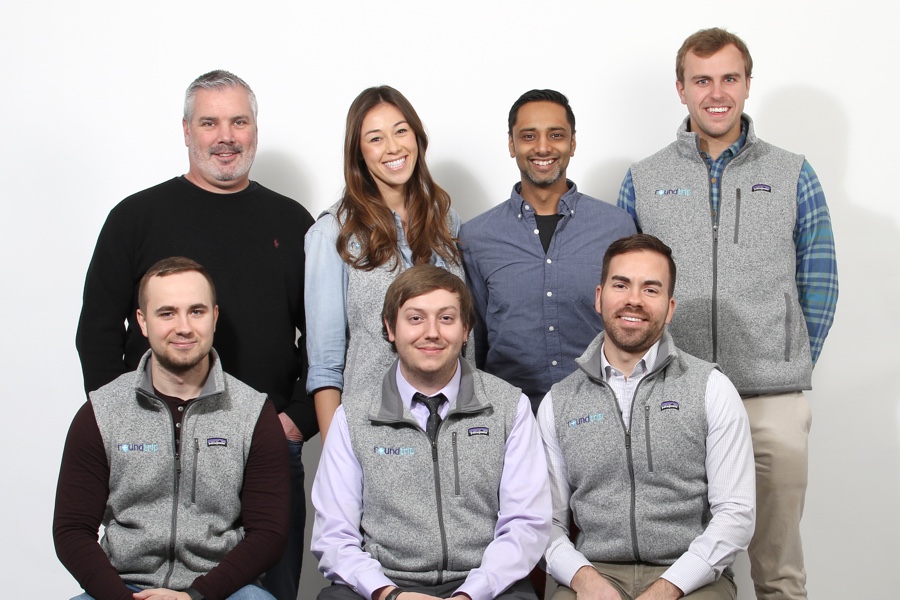 Funding: In late March, RoundTrip closed a $1.9 million seed round, with local investor Ben Franklin Technology Partners and strategic partner Johns Hopkins University.
New Business: The startup has added clients, including Jefferson Health locally, and is seeing “an all-time high in ride bookings with early adopters like MD Anderson Cooper and Cooper University Health across the river in Camden,” the company told Philly Mag.
New Digs: From January 2018 to June, RoundTrip said it doubled its business. To accommodate the growth, the company moved its HQ to Old City (2nd & Chestnut) from Northern Liberties last month.
Next Up: “We recently brought on a Director of Operations from Lyft who will be improving our product offering as the business continues to scale,” the startup said. “We are available nationwide, but are focused on providing all levels of service in 20 states by the end of the summer.” 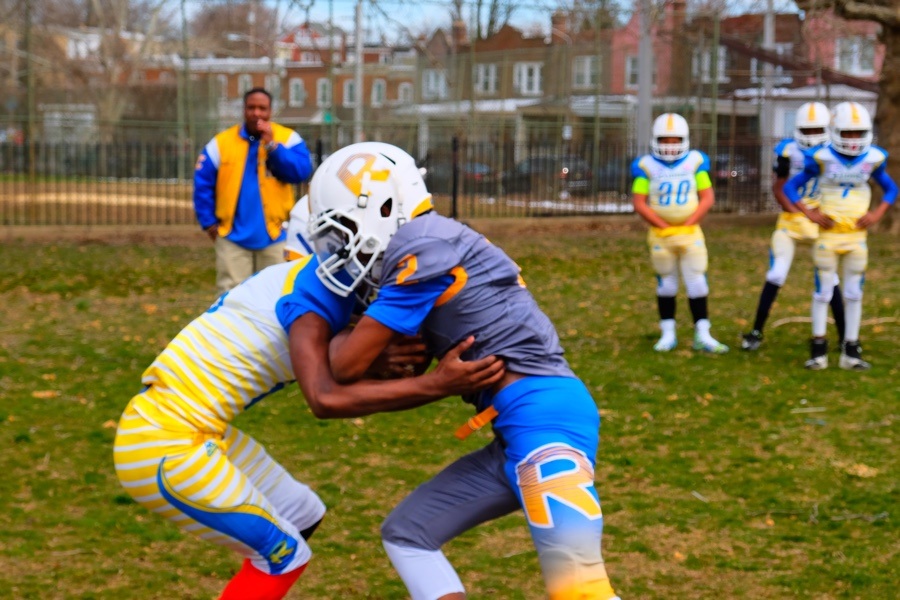 Funding: At the end of May, Tozuda launched a crowdfunding campaign on Kickstarter to raise awareness of its product and $30,000 for the sensors’ production run. With $17,000+ raised to date, the project is 58 percent funded and will conclude on June 28.
Team: Since February, the startup welcomed four full-time team members from Lehigh, Drexel, and Temple.
Trial Run: Through its field trial with Pennoni construction, Tozuda says it gained insight about its sensors’ performance on construction sites. Founder Jessie Garcia completed the Village Capital Pathways program where she says she learned about the process and pros and cons of venture funding.
Launch Date: “We will be wrapping up our Kickstarter campaign and gearing up to deliver our sensors for the fall season. Following our campaign’s conclusion, we’ll finalize the sensors’ prototype iteration and package design,” Garcia told Philly Mag. “Next, our manufacturing process will begin with designing assembly features, manufacturing injection mold plates, producing injection molded components, and building our final assembly in quantity. Quality assurance testing is the last step before we will be able to begin fulfillment and ship out sensors to our well-deserving users!”
Expanding Purpose: Tozuda is also focusing on promoting its sensors’ applications outside of contact sports to help raise awareness in the construction and cycling markets. “We will be presenting our Pennoni trial findings to the Mid Atlantic Construction Safety Council in July,” said Garcia. “We are also excited to be attending the Philadelphia Bike Expo in October. Following this, we are looking forward to making V2 of our Tozuda Head Impact Sensors a reality.” 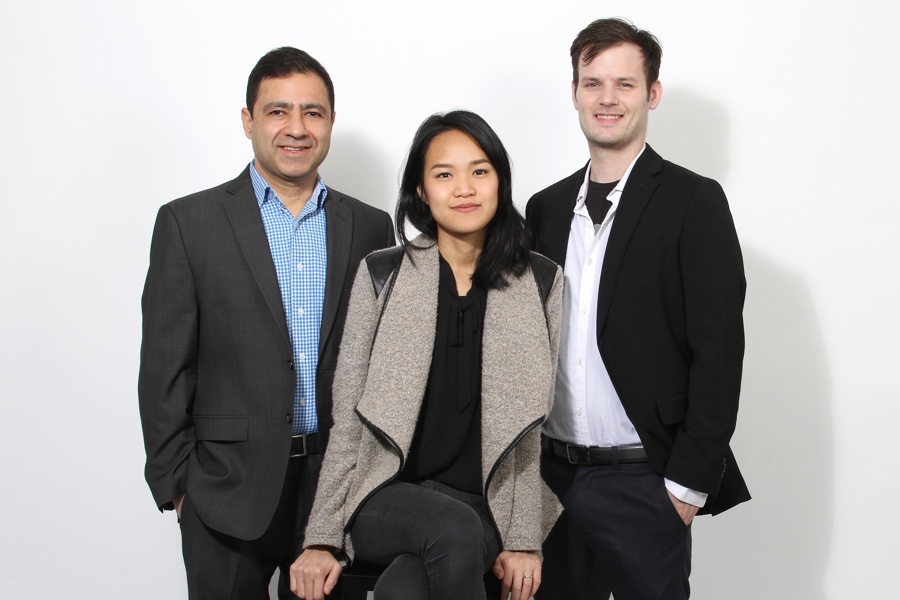 New Business: VitalTrax signed up several new customers including a top global pharmaceutical company and two major research hospitals, among others.
New Products: “PatientWing for patient recruitment for clinical trials grew significantly in this year,” founder and CEO Zikria Syed told Philly Mag. “We also launched PatientWing Enterprise – platform that allows pharmaceutical companies to publish and promote their clinical trials and enable patient enrollment.”
Team: VitalTrax said it increased its workforce by 33 percent.
Next Up: “For the upcoming months we plan to add a few more employees, continue to scale our business by servicing existing customers,” said Syed.