Dear White Male Investors: Your Time Is Running Out

A panel of the country’s top investors, including Josh Kopelman, Arlan Hamilton and Maya Baratz, convened on Thursday during Philly Tech Week to talk about the future of venture capital and innovation. Here are some takeaways from the fiery discussion. 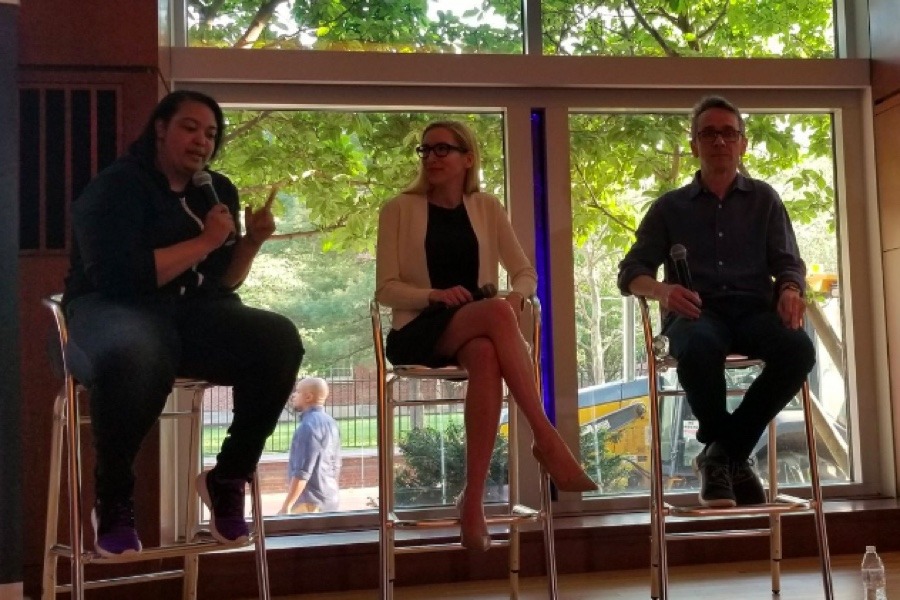 The three investment leaders talked freely about where they think the venture capital world is headed and offered pointed advice about why venture capital isn’t the best option for many founders. Looking ahead, the innovation space will drastically change in terms of who’s at the table. Those VCs who don’t adapt will be left behind.

Here are more excerpts from the conversation:

VCs Are Paid to Say No

“The hardest part for me about switching from entrepreneurship to venture is that almost everyday I get paid to say no. And I’m an optimist. I don’t like to say no. I could love an idea. I could love a founder—But it just might not clear a certain expectation or bar. Or it might be toward a market that might be a little too small for us. So over the last 15 years we’ve said no 45,000 times.” -Josh Kopelman

“If I personally can’t find a way to meaningfully help [a company], and not just with money, but with my own wisdom and network — even if it might look really good — it’s more on the risk side of a risk I wouldn’t be willing to take. […] That’s my gut check.” –Maya Baratz

Venture Dollars Aren’t For Everyone

“I have a bias toward entrepreneurs who have bootstrapped their companies and have gotten traction all on their own. I think that’s an art form that’s incredibly difficult. The question I like to ask entrepreneurs is, ‘If you want to raise money, when do you want to raise money?’ It’s usually at the time when that money will help you scale in a way you can’t on your own. A lot of entrepreneurs think that raising money is a stamp of approval but that’s not necessarily how it works. You’re really bringing on a partner, someone who could end up being your boss.” –Maya Baratz

“People view venture capital as the path to building a successful startup, but venture capital is a product. And it’s the wrong product for most people. When venture capitalists say no, they’re not saying you have a bad idea. They’re not saying you’re going to fail or that you won’t grow rich. They’re just saying that it might not match the math, the expectations or the hurdles that investors put when they invest in this asset class. There are plenty of companies where I think the worst thing they can do is buy my product.” –Josh Kopelman

Tech Hubs Should Be Treated Like Local Sports Teams

‘Instead of dividing the country up by regions that specialize in certain things, like Hollywood is for film or Silicon Valley is for tech, why not look at tech hubs as localized sports team? We can root for our local tech hubs and compete across the country to drive innovation.” –Arlan Hamilton

Don’t Just Fall in Love With Your Idea

“A lot of founders fall in love with their idea but not their idea as a company. And those two are very different things. You can get inspired by ideas all day long. […] But the difference between and idea and a company is going on a date and getting married. When you have a company that thing that is your idea is going to take over your life for probably seven years, even sometimes more. The things that I see in entrepreneurs that make their ideas companies is that they’re obsessed with it so much they understand the market, they know their competitors. They’ve tried it from seven different angles. And they’re deep in that product. They have the tunnel vision you need to build it.” –Maya Baratz

“The barriers keep coming down. Not just costs. When I got into the industry, there was so much knowledge trapped in the minds of practitioners. The only way to get at it was geographic proximity with those people. Now you see so much getting shared through online communities. […] This is reducing the geographic disadvantages and smoothing the playing field out. It’s never easy to be an entrepreneur. It’s never easy to start a company. But with every year that passes, it gets easier to do it in a city outside of Silicon Valley. –Josh Kopelman

VCs Who Exclude the Marginalized Will Get Left Behind

“You don’t have to worry about robots because Black folk and women and the LGBTQ community are coming. And in ten years, I think it’s going to be a very diverse space. I don’t mean diversity as in we have gotten rid of all the straight white guys, because they’re fun! I mean, they’re not as fun as us! […] The ideal and almost utopian view that I have, my North Star, is that this room is every room you walk into when it comes to technology, and it represents all that we have to offer. Don’t miss out on it, because it’s going to happen with or without you, white male investors.” –Arlan Hamilton

You can view the full talk here:

@mbaratz @arlanwashere @joshk take the stage to close out Introduced and talk about the future of venture and innova https://t.co/t785tIFz8D