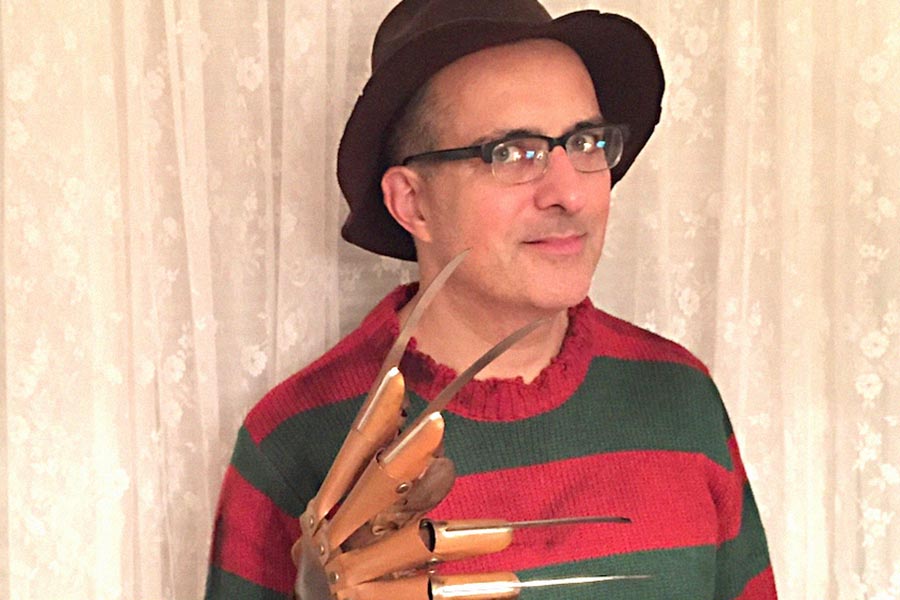 For this special Halloween edition of I Love My Job, we bring you Dan Fraga. For the last 20 years, the South Jersey native has been programming the bloodiest, weirdest, and creepiest horror movies of all time for the local movie screening group Exhumed Films. Here, he tells us all about it.

My full name is… Daniel Fraga. “Fraga” is Cuban. My father is from Cuba. He came to the United States actually before people did it to flee Castro. He was a proto-revolutionary. His parents sent him out of the country so he wouldn’t be killed. Now he has an interesting story.

I grew up in… Audubon, New Jersey.

These days, I live in… Haddon Heights, New Jersey, which is, oh, all of a half-mile from where I grew up. The schools are great and Stella lives here from Saturday Night Dead. Remember that? I went back and watched them and holy crap they were very provocative.

My day job is… that I am a high school English teacher. Apparently today is senior cut day or skip day. Why pick a Monday? Why not a Friday?

The thing I love most about my day job is… getting kids to think about their place in the world and how to be better people and make the world a better place. In literature and language arts, we try to teach social consciousness as much as vocabulary. It’s always great when a kid makes a meaningful life connection between what they are reading and their own experience.

The toughest thing about my day job is… remembering what day it is, because we have a rotating schedule.

My other job is… programming cult and horror movies for Exhumed Films, but I’m not sure it’s a job. It’s a job in that it’s a lot of work. It’s just a job that you don’t get paid for. Any profit that it makes is reinvested for purchasing movies, purchasing trailers, and paying John Waters an exorbitant amount of money to show up at your event. We do the movies because we love the movies — not for financial gain.

Exhumed Films got it start… in 1997, because four friends really desperately wanted to watch a few bad zombie movies on the big screen and figured maybe others would want to see them as well. We found people who would rent us prints and a local movie theater that would let us rent it out. We had no money but we chipped in like $100 or $150, enough to rent everything, and then hope for the best. Fortunately, people came out and supported us. We said, if it bombs, we’ll stop. But it never bombed. It kept getting bigger.

These days, Exhumed Films is… a bunch of middle-aged men who still enjoy sharing their passions for cinema with the community.

We tend to show… anything from classic American horror like Halloween or Night of the Living Dead to obscure European horror films like Torso or Burial Ground to sleazy exploitation films like Teenage Mother, which is about the dangers of sex education in public school. The audience lost their minds on that one.

Our last screening was… the 24-Hour Horror-Thon this past weekend. We decided for our 10th anniversary in 2007, we had always done double and triple features, and we said let’s just go nuts and try 24 hours of movies. Kind of like our first show, we thought, this will probably be a disaster. But it exploded, and it’s continued to grow. We sell out in five minutes. But it wasn’t 24 hours this time. Unfortunately, at about 2 a.m. on Sunday morning, water started pouring into the main lobby of the International House through the ceiling, and we couldn’t finish it. We got through 10 out of 14 movies.

One movie we’ve always wanted to show but can’t is… Hellraiser II. One of the few sequels that matches or surpasses the original. It’s one of the most subversive films to get a national release. We can’t find a 35mm print. We only show movies on film, so we can’t just pop in a DVD.

The most controversial movie we’ve ever shown was… probably Cannibal Holocaust. When it came out in 1980, the director was actually arrested and charged with making a snuff film. The film was so realistic. It pretends to be a found footage movie like Blair Witch. It’s incredibly brutal. The director actually had to go to court. There’s also real life animal killing in it. I despise the movie with all of my being, but there’s a difference between liking a movie and letting people be exposed to something that exists. Art can be meant to enrage. For better or for worse, this movie exists and deserves the opportunity to be screened. People were rightfully upset and horrified.

My wife thinks that this is all… ridiculous and childish. She hates horror movies in general. But she’s extremely supportive and indulgent. But I think she’d be thrilled if I said I was quitting and would never do a show again.

My kids think that this is all… completely amazing. My 15 old son has attended the last three Horror-Thons with me and says he’ll continue Exhumed Films when I’m dead, which is touching and creepy at the same time, and my 11 year old daughter loves to dress in costumes for horror movie conventions, most of the time dressing as characters she is much too young to actually watch.

We ran into legal trouble when we tried to… show Star Wars. It’s a long story. Last year, the rights to screen Star Wars, the originals, became available for the first time. We booked it. And then at the last minute, there was some sort of legal dispute, and 20th Century Fox pulled all of the screenings, even though we had sold two of them out.

The best recent horror movie has got to be… Get Out. Super smart and works as both sort of a satire of horror movie tropes but also has a lot of really intelligent and upsetting things to say about race in our society.

The best mainstream horror movie of all time has got to be… The Exorcist. It’s by no stretch my favorite horror movie, but for a mainstream movie that offends people… never today would a major studio release that in its original form. I absolutely respect it.

My all-time favorite is… Evil Dead.

The next Exhumed Films event is… our December 9th screening at International House. It’s Frankenstein’s Bloody Terror in 3-D. This is the first time it’s being shown in 3-D in 50 years. And Dracula vs. Frankenstein.

This year for Halloween, I am going to be… Freddy Krueger. My wife is not dressing up. She’s not a fan of Halloween. My daughter is Rosie the Riveter. She wanted to find the most feminist thing she could be for Halloween. And my son is being me. He’s dressing as me as a teacher. He goes to the same school I teach in. I’m apparently infamous for my water bottles I carry, so he’s going to carry my water bottle and have a bad combover.