Engineers at the school say a material known as “MXene” is the answer. It can even power electric cars that fast, too. The challenge? Getting industry on board. 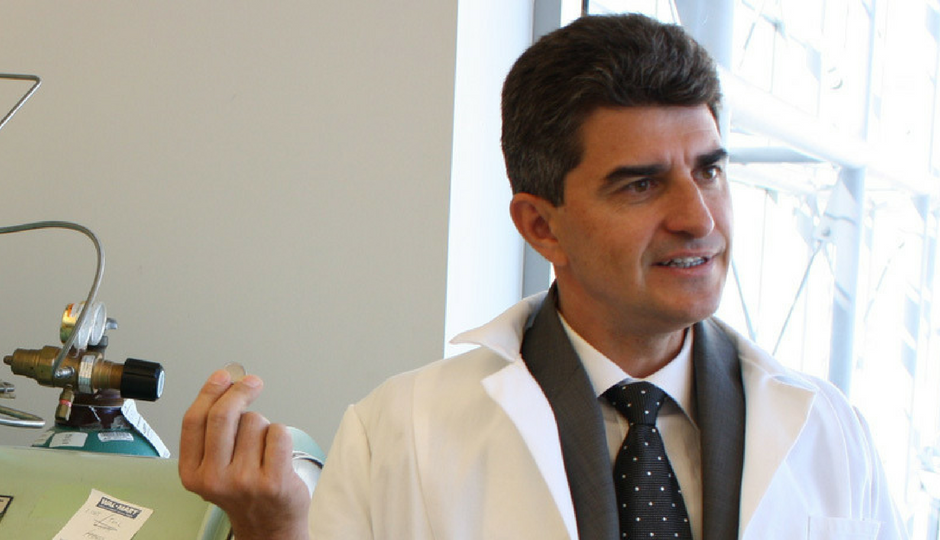 The battery hasn’t advanced in decades, and engineers at Drexel University want to change that. A team of researchers led by College of Engineering professor Dr. Yury Gogotsi has been quietly developing a material that can pave the way for a new class of high-power batteries. The material is called MXene, and it has the power to fully charge a cell phone within seconds, the scientists say. Dr. Gogotsi’s team published a paper in Nature Energy’s July issue that debuted functional designs for MXene electrodes that make real-world applications of the futuristic material more attainable than ever.

If you’re wondering just how MXene might change the game (and how soon), and what it all means for Drexel and Philly’s place in the field of material science, BizPhilly talked to Dr. Gogotsi, who’s also director of Drexel’s A.J. Drexel Nanotechnology Institute, to get some answers. Here’s what he had to say.

BizPhilly: Let’s jump right into the science here. What exactly is a MXene, and where did that name come from?
Gogotsi: The name comes from what the material is made of. About 20 years ago, in 1996, my colleague Professor Michel Barsoum developed a new family of layered materials known as MAX phases. They are very conductive and made from three elements. The M, the A, and the X come from the names of the three areas on the period table where those elements come from. In 2011, my graduate researcher Michael Naguib helped Professor Barsoum and I discover how to take away the “A” element of a MAX phase, leaving a two-dimensional material with just the M and X. Just like graphene, two-dimensional materials by convention all have the suffix “ene.” So when we had the M and the X of the MAX phase, we called it MXene – but we pronounce it “Max-een” just to make it sound easier and better.

BizPhilly: What exactly makes MXene such a good option for building powerful batteries?
Gogotsi: Think about how a typical battery will heat up and lose energy as you use it. Materials like graphene, called supercapacitors, are very good at holding that energy in, so we use them in layers as electrodes and to coat conductive surfaces that capture and move energy quickly to a system that needs it. But other supercapacitors cannot hold very much energy at a time. This is why it takes as long as it does to charge a mobile phone. MXene is better than the other supercapacitors we use at delivering these short and very powerful bursts of energy, but it can also hold more. With the MXene electrodes that we built for our study, we demonstrated that this charge can be received much faster, in seconds or minutes and not hours.

BizPhilly: What are some of the possible uses of a battery built with MXene?
Gogotsi: We will likely first see MXene used for batteries that need to provide energy in bursts. For example, in Europe, it is common to turn off cars at traffic lights and then turn them back on to go. If you think about getting in your car and turning the ignition, that revving up can take quite a few seconds, which makes it hard to do this at a traffic light. With a MXene battery, turning on a car would take a much shorter time because of the speed of the energy burst. This is also why we know that MXene will charge a battery in a smartphone in just a few seconds. There are very many possible applications of this research that I think we will start to see soon.

BizPhilly: How close are we to getting these high-power batteries into our devices?
Gogotsi: Right now, we are demonstrating feasibility. We will continue working at Drexel, but it’s also very important that the industry comes and works with us on their practical solutions. How can we help companies that produce batteries improve batteries and make better batteries? This usually takes dialogue between the scientists who discover new materials and industry manufacturers that implement materials in their products. This dialogue is very, very important.

Also, this is new material. We can make 100 grams in a lab. But the growth needed to build it for companies will take large-scale manufacturing. It should be manufactured in hundreds of tons, not hundreds of grams. This is another important step – it should be a chemical or materials company that will take on manufacturing the material in those amounts.

BizPhilly: Do you think there will be a price advantage once you are able to make higher-power batteries?
Gogotsi: Potentially, yes. But any new materials are always more expensive than existing materials. It’s always economy of scale. Typically, new materials enter applications where performance is the key. After that, as they become used more and more, they become more and more common. And a good example of that would be the lithium ion battery. Lithium ion batteries initially were used as small, expensive batteries in things like camcorders and cameras. I remember replacing a battery on the road once for my laptop computer. I paid $200 for a battery for my laptop! And now, the cost of that same battery for a computer is something like $20 or $30. Prices drop in magnitude just over time. Whenever you start producing large quantities, prices go down. But for this, it’s necessary to start commercial production.

BizPhilly: Does MXene have any major competing materials?
Gogotsi: Of course. There are always competing materials. There are always choices. Graphene is a competitor – sometimes the one that wins at the end is not the best one. It’s often the cheapest one. It may be the one that became more available or some big manufacturer gets a monopoly on. It’s always difficult to predict the end outcome, but there is clearly an opportunity for MXenes now. Sometimes, new materials discovered do not necessarily make it all the way to product, but can still push other researchers to improve current materials so they are not replaced by the new materials. Because of this, I think new materials always have a positive impact. But, until you can go and buy a cell phone or a device with a battery containing MXenes, we won’t know whether they will be the winner or not.

BizPhilly: What impact will this research have on Drexel University and Philadelphia?
Gogotsi: Because Professor Barsoum at Drexel invented the family of MAX phases that act as the precursor to MXene, we’re really building on the existing Drexel technology and reputation. It greatly improves the worldwide visibility of Drexel and Philadelphia. For example, after the publication of this latest MXene paper, I saw three weeks in a row of coverage of this work in every possible language: Thai, Russian, Ukrainian, Finnish, Chinese, Korean. Everywhere. I was in Korea last week, and my colleagues were telling me that there was news on the Korean radio about this discovery. So it’s great to have major discoveries made in Philadelphia – made at Drexel – because it improves the profile of our university and our city worldwide.