Q&A: Looking for an LGBTQ-Friendly Doc? This New Site Can Help 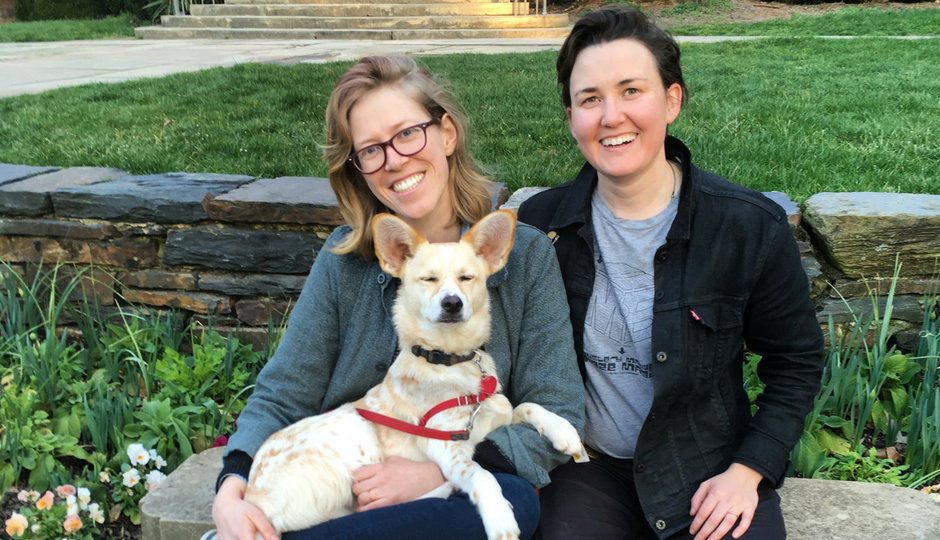 Rating and reviewing health care providers is nothing new, but sites like RateMDs, Healthgrades, and ZocDoc have never quite cut it for the millions of LGBTQ Americans who worry about confronting discrimination each time they step into waiting room. After all, a long wait time is hardly an issue if a physician who disagrees with your identity refuses to see you.

When Philly residents Catherine Hofmann, 31 and Nic Anthony, 27 got sick of sifting through Facebook groups to find recommendations of LGBTQ-friendly doctors in the area, the couple decided to create a centralized resource to help the LGBTQ community seamlessly access safe health care.

After a year in stealth, the free Yelp-like resource known as QSPACES, has launched in Philadelphia. BizPhilly talked with founder and CEO Hofmann about how the team developed the site and how they plan to push Philly’s health care community to make diversity a priority. 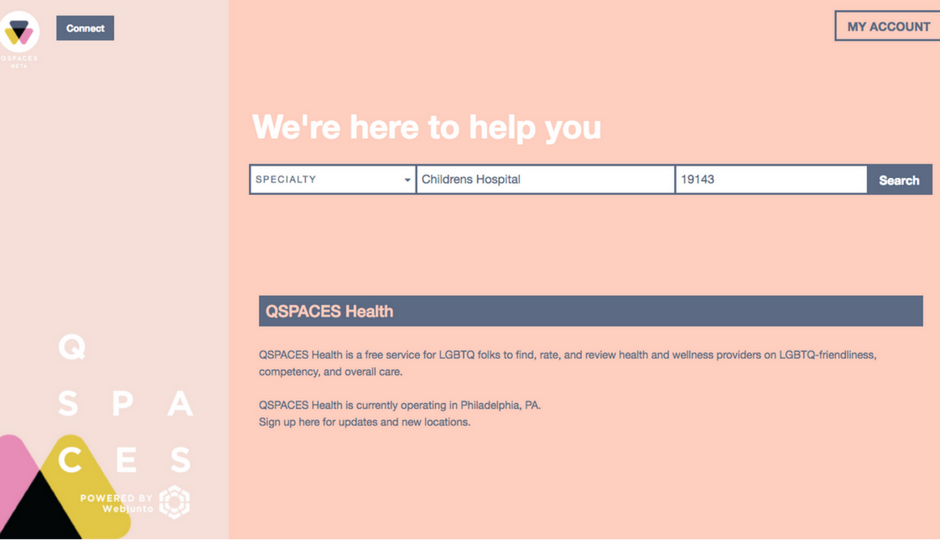 BizPhilly: QSPACES is officially out on the market now. Can you walk us through how the site went from idea to reality?

Hofmann: My wife and I moved up here from Raleigh in July of 2015, when she was starting medical school at Jefferson. We were just figuring out this city, where other people we would be interested in hanging out with would be – everything you need to do to orient yourself to a new city.

We also had to get our insurance switched over and find new primary care doctors. We were on these Facebook groups looking for doctors. It was really difficult, and we saw so many other people also looking for doctors. At some point a light bulb went off. I was thinking, “It should be a lot easier to find this information. Where is there a platform, you know, like a Yelp, specifically for the LGBTQ community to share this information with each other?” We looked, and we weren’t finding anything, so we decided to do it ourselves.

We entered the Jefferson Accelerator Zone pitch competition, and the Jefferson innovation group saw a great opportunity to do outreach to the LGBTQ community. They gave us some funding and we found found an incredible web design company here in Philadelphia called Webjunto. We started working with them on the essential features we thought we needed, and after getting a lot of feedback from potential users, we launched a year later. 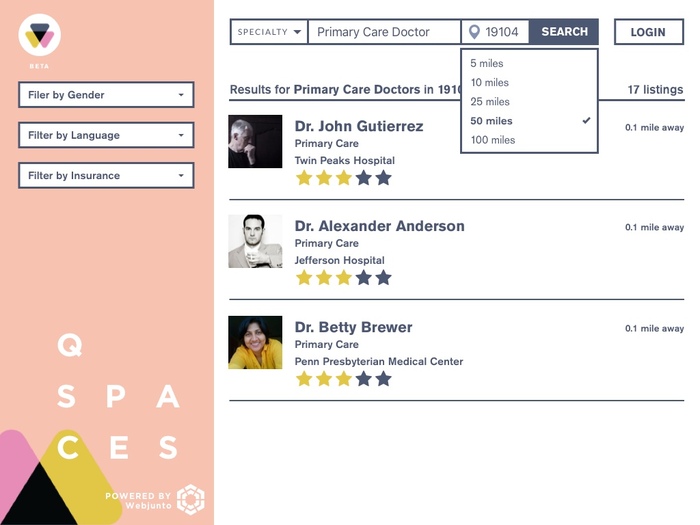 BizPhilly: There are a lot of doctors on the site right now. Do you have certain criteria you’ll use to determine whether or not a doctor goes into your database?

Hofmann: No, we didn’t want to be a gatekeeper to that information. We pre-loaded the database with around 7,000 MDs and DOs throughout Pennsylvania – mainly concentrated in Philadelphia – but we didn’t want to say, “Well, these are our recommendations, these are the doctors that we’ve somehow ‘verified’ as LGBTQ-friendly.” We wanted to keep all of that information crowd-sourced. And we’re encouraging people to say a little bit about themselves and their identity when they’re leaving a review, so that you can then make a better-informed decision. Otherwise you don’t know who’s had good experiences with a doctor – if it’s just gay men, or only lesbians, or whatever. Even within the LGBTQ community there are still so many different identities. With race, class, socioeconomic background, religion, there’s a lot of stuff going on. And what will matter is reading an experience from someone who shares at least one of those identities with you.

BizPhilly: And different patients might be comfortable seeing doctors with different levels of knowledge about those identities.

Hofmann: Exactly! Not all doctors are LGBTQ-competent, but if they’re coming from a place of humility and respect, and they’re willing to learn about some issues that are more related to the LGBTQ community, like, that’s great! Maybe they just don’t have the training to be 100 percent LGBTQ-competent right now, but they’re willing to work towards that. That’s going to be a great doctor. 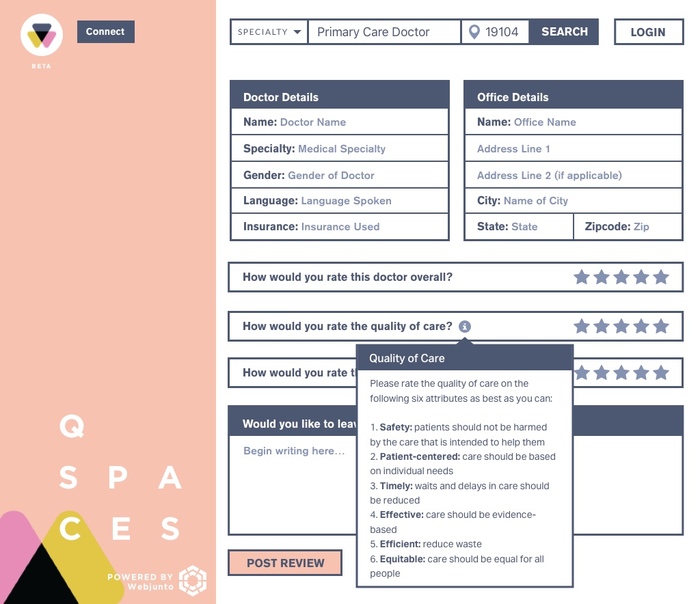 BizPhilly: Speaking of comfort, were there any experiences in particular that either you or Nic had in doctor’s offices that you think helped inspire QSPACES?

Hofmann: There’s always this moment where you’re talking to a new doctor, and it’s like, “Ok, at some point they’re going to figure out I’m gay, and I have no idea how they’re going to take that.” Like, at some point, they’re going to ask me if I’m single or married – which, somehow, there’s no dating option. I don’t understand that binary either – but when I say I’m married, they always assume it’s to a man. And it’s frustrating.

The doctor I have right now is great, and has embraced the language that I use and always tries to be very respectful. But I’ve definitely had some experiences where I can tell a doctor is sort of stiffening up, and it kind of breaks that line of communication and that trust that you’re supposed to have with a doctor.

BizPhilly: At what point does that become dangerous?

Hofmann: We had a friend whose doctor wouldn’t do STD testing on them! They were like, “Oh, you’re not at risk.” And my friend just said, “You don’t know everything about my sexual life, can I please have an STD test?” But the doctor kept saying “no.”

We had another friend who told her doctor when she was 16 or 17 that she’s a lesbian, and the doctor went, “Oh, cool, now you don’t have to get pap smears ever,” which is wrong. It’s false information. So even if it’s not intentional, or it’s not conscious, there still can be wrong information floating around out there. I think that gay men, especially older generations of gay men, living through the AIDS crisis, they couldn’t tell doctors they were gay because the doctors would kick them out of the office! Like, “This is scary, we don’t know what’s going on, you’re dirty, get out of our office, we can’t treat you.” And that’s still happening today with a lot of trans folks. About 70 percent of trans folks face discrimination in health care settings, and 27 percent of trans people are completely denied care outright.

BizPhilly: Looking ahead, does QSPACES have a plan to develop a training or education module for physicians who treat LGBTQ patients?

Hofmann: Yes, definitely. We want to create provider resources so they can become more competent with the LGBTQ community and those intersections. I think at first it’ll just be information packets or a publication, but then I would like to see that moved into office trainings – working with medical systems and training packs of their nurses, receptionists and doctors on how to treat people.