Klip Collective spent three months building the program for the popular food chain's new employees, but was it worth it? 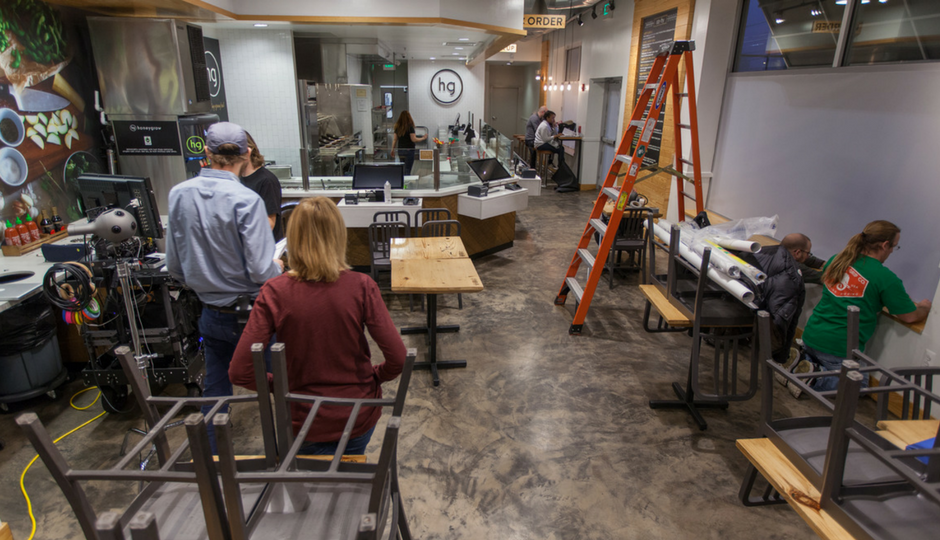 There’s been a lot of buzz around Philly-based restaurant chain Honeygrow’s new employee orientation, a virtual reality (VR) program designed to foster brand consistency across the growing company’s locations. The program is the latest step in Honeygrow’s long love affair with creative technologies — the touchscreen ordering and payment system may be a fast-casual fixture now, but when owner Justin Rosenberg first launched the salad and stir-fry eatery in 2012, his method of tech integration wasn’t used as widely as it is today.

Still, some are questioning whether onboarding employees in the hands-on food service industry with VR is a worthwhile use of the trendy technology. VR has already proven itself to be colossally beneficial when used for medical training, certain therapies and other niche challenges. But as VR continues to grow, does it have a place behind food prep counters as well?

To find out, I paid a visit to Klip Collective, the experiential art/tech shop in Northern Liberties that designed Honeygrow’s VR program. Creative director Ricardo Rivera built it as an application on Google’s Pixel smartphone, which slips easily into its Daydream VR headset, which retails for under $100. After the system is explained, assembled and on my head, I was handed a small remote control (synced up with the phone) to navigate my way through the experience.

The program itself is essentially a dressed-up 360° video, opening on a shot designed to make you feel like you’re standing in the middle of an empty Honeygrow dining area. Moments later, Honeygrow CEO Rosenberg appears, first as a scratched white outline, then in full. I was so busy trying to decipher from the contours of the 360° footage whether Rosenberg was filmed inside the store or superimposed via green screen that I forgot to pay attention to the first minute of his introduction.

From there, the footage takes you through the different areas of a Honeygrow restaurant and the different prep stations behind the counter. I watched one employee measure out ingredients for a stir-fry, another boil perfect noodles, and a third toss it all together in a wok, guided throughout by a corporate buzzword-loaded voiceover and helpful cartoon arrows. After a quick tour of the kitchen and explanations of a few more employee roles like cashier and “ambassador” (or greeter), Rosenberg was back to bid me goodbye. 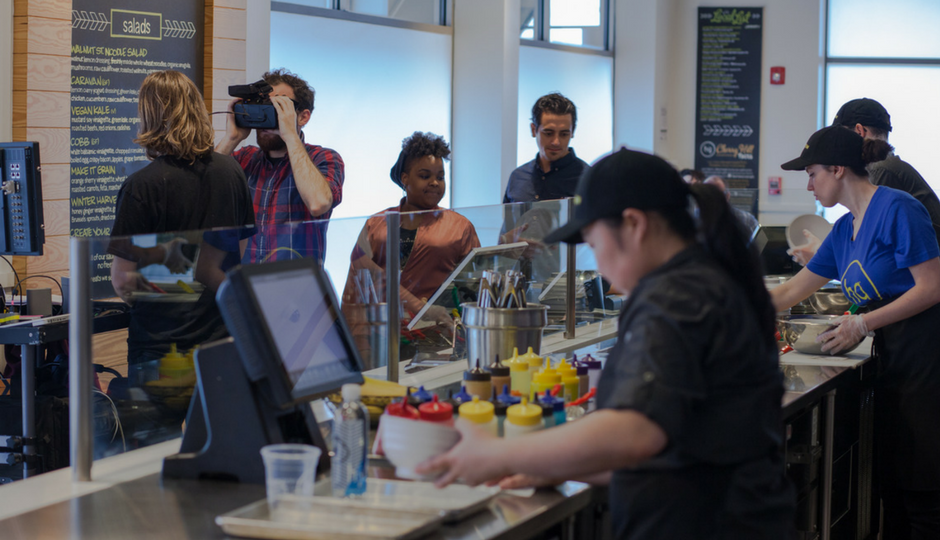 Filming at Honeygrow from behind the counter. | Photo courtesy of Kevin Ritchie

Most surprising to me was the fact that the program was hardly interactive, despite my previous impression that interactivity was a primary motivating factor in the creation of the training module. Aside from a short game in which you’re given three chances to properly stack fresh food on the shelves of a walk-in unit, the only interactive feature is the ability to choose the order in which different portions of the module are viewed. The food storage game, which assistant creative director Kevin Ritchie claims has been Honeygrow trainees’ favorite part of the program since its May launch, is also one of the less information-dense segments.

But here’s what really tells me the most about what Honeygrow’s goals are for their VR training: When new Honeygrow employees show up for their moment with VR, they are seated with the headset on, not in the kitchen or a manager’s back office, but directly in the middle of the dining area during the restaurant’s open hours. “They want people to ask about it,” says Ritchie. “It’s a conversation starter when the customers walk in.”

But who is the conversation being started with? It certainly isn’t the new employee – they’re checked out from reality, with a headset strapped to their face. That’s got to feel pretty uncomfortable in a room full of people. I felt incredibly self-conscious while testing the program, and unlike Honeygrow trainees, I wasn’t even being watched. And let’s not forget that all that headset is really doing for the new employee sitting in the dining area is placing them in the virtual version of the exact same environment that they’re physically sitting in, albeit with some cartoons. It’s enough to make your head spin. There’s irony in the fact that the biggest difference between Honeygrow’s VR world and their real-life dining areas is that real life is, well, more real.

“Since the very beginning, when we opened our first restaurant with touch screens, people have thought of us as a technology-forward company,” Honeygrow chief brand officer Jen Denis told me. “Hopefully people will understand that we take technology seriously.” According to Denis, Honeygrow does have plans to expand upon their VR program, although she acknowledges that the possibilities for increased interactivity are limited by cost. The more interactive VR systems require a complex and larger setup, involving tech like motion-sensing cameras. “The nice thing about our VR is that it’s portable,” insists Denis. “There’s a novelty to it. We find that when people are training, the more immersed they can be, the better.”

What Honeygrow really wins from implementing VR is a new marketing strategy. For a company that prides itself on cutting-edge restaurant services, latching onto the VR craze to show off the tech to customers makes sense – and it might explain why new employees use the program out in the open.

Here’s the conversation that I’d like to see Honeygrow’s VR start: What is the potential of VR in training, particularly in the fast-casual dining industry?

VR technology is fun, engaging, and as long as it exists, companies are certainly free to do with it what they want. But to me, the true novelty of virtual reality is the ability to dive into a place or experience that isn’t immediately possible in the physical world — a technology that can make you feel like you’re walking on the moon, or allow a bedridden person to remember the feeling of attending a crowded concert.