She stopped by during Philly Tech Week. Here's what she found. 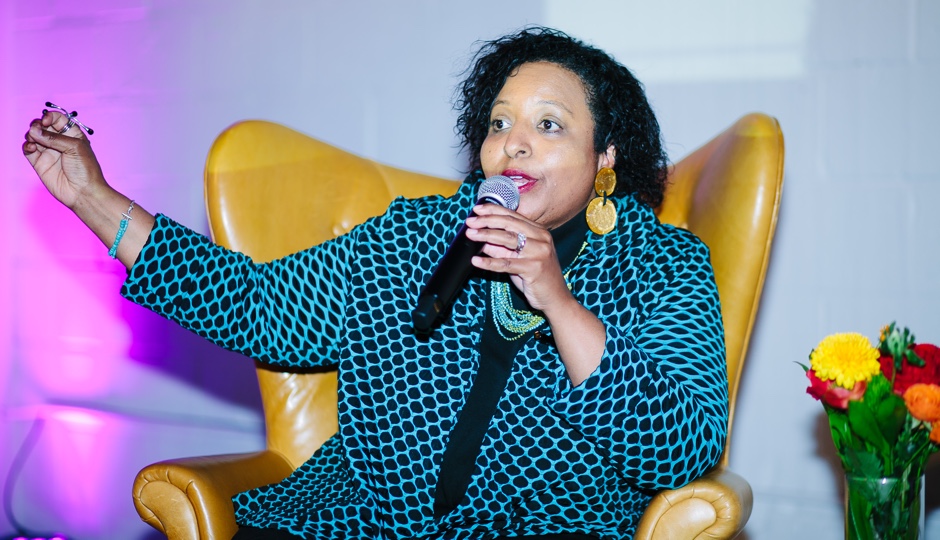 Gayle Jennings O’Byrne speaks at the third annual Women in Tech Soiree at WeWork during PTW17. Image courtesy of Stimulus.

Philly Tech Week this year gathered thousands of people around 100 events, and one person who stood out from the crowd was Gayle Jennings O’Byrne.

A venture capitalist based in New York City, O’Byrne made her way down for tech week to check out a few events and speak at the third annual Women in Tech Soiree hosted by Mogulette founder Brigitte Daniel Corbin and Stimulus founder and CEO Tiffanie Stanard.

As the keynote speaker for the night, O’Byrne had tons to say about the state of women in tech. After all, she recently left JP Morgan where she was for nearly two decades to launch the investment management firm Harriet Capital and its venture arm the Harriet Fund, which has been covered by publications like Forbes, Inc., Self Magazine, NBC News and Black Enterprise. The Harriet Fund will exclusively back ventures led by women of color, and O’Byrne says there’s much need for this focus especially in cities like Philadelphia.

BizPhilly caught up with O’Byrne during Philly Tech Week to learn more about the Harriet Fund. We also got the opportunity to ask O’Byrne, a Penn alumna and Silicon Valley native, how she views the Philly tech scene as a venture capitalist on the outside. O’Byrne offers insight on Philly as a beacon for diversity in tech, corporate and university partnerships and how Philly entrepreneurs can attract investment capital. This is the first part of BizPhilly’s interview with O’Byrne. Check back for part two next week.

BizPhilly: You’re a black female venture capitalist. That’s uncommon. Can you talk about your path and how you came to where you are now?

O’Byrne: I’m a California girl. I grew up in Northern California, Silicon Valley. My mom was one of the original “Hidden Figures.” She was a math major, statistics minor and knew COBOL, FORTRAN — all those programs they talked about in the movie. So I grew up in the shadows of Silicon Valley, with the lack of diversity that was there. I came east to go to school in Pennsylvania at Penn and the moved back to California to work at Sun Microsystems. At the time they were launching things like Sunsoft and Java coding. After that, I went to Wall Street, and I’ve been a New Yorker for the past 18 years.

Now I’m a venture capitalist and founder of Harriet Capital because Silicon Valley in many ways hasn’t changed that much from when my mom was there, particularly the diversity and the opportunities for people of color and, in particular, women, unfortunately.

BizPhilly: What else propelled you to leave JP Morgan after 17 years to found Harriet Capital and the Harriet Fund?

O’Byrne: Harriet Capital and the Harriet Fund came out of marketing realities that were documented in a report called #ProjectDiane that a business partner at Digital Undivided produced and researched. A couple of troubling statistics came out of it.

One was that out of all 10,000 venture capital deals funded between 2012 and 2014, only 24 of them were with companies led by black women. So statistically, only about .002 percent of deals were with black women. This didn’t add up for me because we know women of color are very entrepreneurial. They’re building companies at a rate of about 800 a day. I don’t want it sound like all 800 are ready for investment or are investable companies, but a recent report on the state of women said that there are four million companies owned by black and Latina women that generated $150 billion as of 2016. So when we put this information next to #ProjectDiane’s VC funding statistics, the math is just bad.

We also saw through the data that black women raised $36,000 on average when they went to the market for funding. The average guy, white guy predominantly, raises $1.3 million. We decided we have to fill that void. There are amazing women out there who can build great companies and the education and professional attainment of these women is at the top. They have, in many ways, followed the American Dream. But now, they need those critical first dollars because the friends and family dollars aren’t always there, and Wall Street, Silicon Valley and venture capitalists don’t even meet them halfway.

Silicon Valley got the way it is because of its culture of failing, but women aren’t even getting enough money to fail, let alone succeed. With the Harriet Fund, we’re getting equity, and we’re giving venture capital that gives women that runway to build a company, learn some things, try some things, fail at maybe a product or two in a market or two, and then go back, rebuild and keep building.

BizPhilly: How do you identify these women of color in need of funding especially if they might already have the mindset that no one is checking for them? How do you create a presence in the community and let them know that you’re here?

O’Byrne: That’s where my business partner Kathryn Finney comes in. She is a successful African American entrepreneur who sold her company and then built the platform DigitalunDivided and its incubator and accelerator program — the BIG Innovation Center — which mentors and coaches women over six months to help them build their companies.

She was in New York but she went ahead and built the BIG Innovation Center in Atlanta. We’re very interested in getting outside of the normal markets that people think of. New York and Silicon Valley are both very good markets but are also very expensive. There are other places like Atlanta and Philadelphia that have ecosystems that can support entrepreneurs and good tech entrepreneurs in particular. 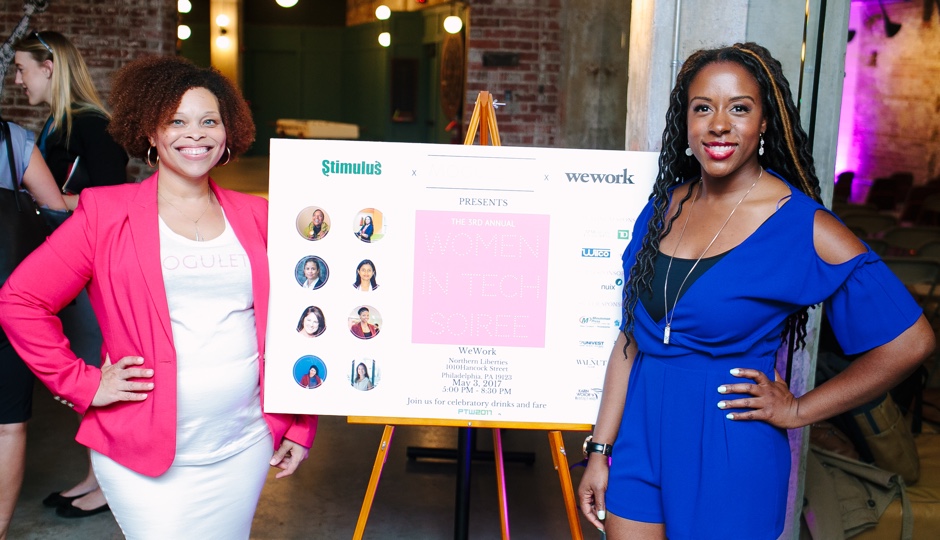 BizPhilly: Can you say more about how you see Philadelphia? What can entrepreneurs do to attract VCs like you to Philadelphia since accessing capital is getting easier but still remains a challenge for folks here?

O’Byrne: I think it’s hard for the individual companies themselves to do that because they’re building companies, which is a 24/7 job. Entrepreneurship is hard enough on its own, and having to go knock on every VCs door just gets exhausting.

I think what’s happening here in Philadelphia is that there’s some organic, and maybe not organic, but intentional ecosystem being created to support entrepreneurs that provides a hub for streams of capital to come in. And this ecosystem should allow entrepreneurs to be smart about the dollars coming in. What you don’t want is a lot of dumb money coming in. Once you have a lot of dumb money and some bad experiences, the well can dry up. As a city, building these hubs of intelligence is going to help the entire community, and that’s how more Philadelphians will get in front of the right VCs and the right capital.

For someone like myself, I’m excited when I think of this kind of system because it signals that the entrepreneur is not siloed, that they have resources and an ecosystem with other supports and even other entrepreneurs that they can talk to. Places like Philadelphia get me really excited because I see market factors that help entrepreneurs to succeed.

BizPhilly: Another factor that plays into Philly’s entrepreneurial ecosystem is the city’s rich suite of universities and corporations. While some are getting in on the innovation action to varying degrees, others are slow to get on board. Think back to your time at JP Morgan when you were in finance, investment banking and philanthropy, was partnering with startups a priority? And can you offer any tips for Philly corporations on how they can get the ball rolling with their support for the innovation community?

O’Byrne: I’d say in the 80s, 90s and even early 2000s, people gave lip service to “partnership.” Everyone used it. It was a buzzword; it was a catchphrase. “Synergy” was complimentary. All of these were out there and overused to exhaustion. What’s different now is that the consumer problems that challenge us, the social issues that exist, have us at a place where we have to come together. Governments, whether at the local, state or federal level, are stretched to capacity. We can no longer say, “I can succeed to your detriment or without you.” Now it’s, “I actually need you to succeed.” And we see this in a couple of different ways. For instance with philanthropy, it used to be chic to have your name on the wing of a hospital or an academic building. Now, everyone should understand that it takes a lot of different stakeholders to reach impact. My suggestion is that everyone must come to terms with the idea that it can’t just be one wealthy family, one major philanthropist, or one grant to have impact. Instead, it’s going to take many. That’s where things like public and private partnership come in. There’s a sense of urgency to wanting to solve these problems, and I think people are now more focused on getting stuff done.

O’Byrne: I would say it’s not a matter of whether they care about it, but it’s a matter of how they prioritize it. And at the same time, it’s a matter of how well the arguments been made for why diversity matters. Tech companies are like everyone else. They’re in the business to make money, earn revenue, return that revenue and those profits back to their shareholders and service customers well. All those business attributes don’t go away. It’s not an either/or, like you either build a company, you run it successfully, or you do diversity.

What I think needs to happen is we all have to get better at making the case for how and why diversity is going to add to the bottom line. We need to talk about it in a way that helps people operationalize the case that’s been made. For me, the clearest to demonstrate that is to go and help women build amazing companies. It’s not just talking about it, and it’s not just celebrating it. It’s getting the dollars in their hands so that they can go build companies.

BizPhilly: When Mayor Kenney kicked off Philly Tech Week 2017, he harped on the need for more diversity. He even suggested we start a “North Star” conference in Philly as an alternative to SXSW, which he felt lacked diversity. As an outsider looking in, can you see Philly becoming the nation’s beacon for diversity in tech and innovation?

O’Byrne: Yes. Philly actually has the perfect storm coming in that you have a generation of millennials that have really good ideas and have this courage to go out and build companies and not necessarily go and follow the traditional corporate path.

On the other side, you’ve got a really neat group of established professionals that have been sitting in corporations and academia that are now coming out of that, either because they’re retiring or they’re looking for the next chapter of professional experiences. And then you’ve got leadership, like a mayor who’s putting this front and center and saying, this is a priority for the city. So when you take all of that and underpin it with corporate support, there’s nothing Philly can’t do.