The Return of the Philly Neighborhood Grocer 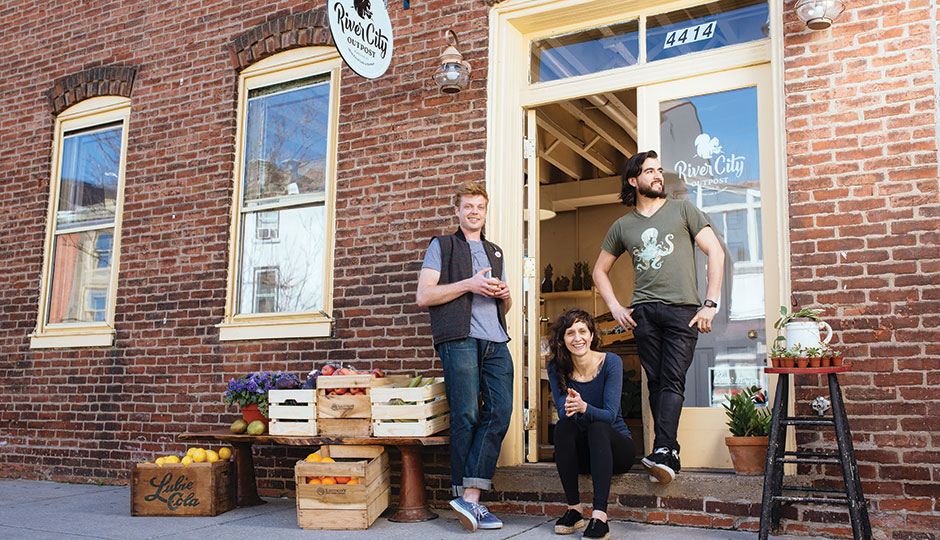 I’m standing on the back porch of River City Outpost, listening to the owners of Manayunk’s new fresh market extol the community values of their venture while joggers keep passing by us on the Schuylkill River Trail, proving their point. Runners stop and wave. When a customer pops in the front door, co-owner Pat Bresling is sure to point out fresh mint and limes displayed in mini wooden crates. “Perfect weekend for a mojito!” he says.

River City Outpost feels like a permanent farmers’-market stall manned by people who are the modern-day version of Mr. Hooper on Sesame Street. It boasts a mix of fresh produce and specialty products, like a pouch of “vegan bone broth.” The store is part of a new crop of pint-size markets — with even more curated selections than co-ops — that are making food shopping, well, just better. The ultimate goal: to free people from the grind of driving to a big-box store after work.

River City Outpost, Riverwards Produce in Fishtown, the soon-to-open Rowhouse Grocery in Point Breeze, and the ever-expanding Green Aisle Grocery stores have a lot in common (besides taking their aesthetic cues from Pinterest): The products are meticulously chosen. The young, savvy owners are focused on providing raw ingredients and educating customers about cooking well. “Forty years ago, there used to be produce garages everywhere,” says Vincent Finazzo, who launched Riverwards Produce as a pop-up in his friend’s garage last summer. Now, he says, “People leave the neighborhood to do a lot of their shopping.” When Finazzo moved to the Kensington area nearly a decade ago, it struck him as ironic: All these Fishtown artists were buying their lentils from massive corporate supermarkets.

Riverwards Produce just reopened this spring in a former fire station on East Norris Street — a mile from the nearest major grocery. Finazzo expects people to walk on over a few times a week for their produce, meats and bulk pantry items. It’s shopping, Euro-style. Before you file this under “those organic-local people,” Finazzo says that last summer, one of his most loyal customers was a lifelong Fishtown resident in search of the tomatoes he remembers from his childhood. And while River City and Riverwards won’t have the space to carry every product, they put equal emphasis on quality (which usually means, yes, organic and local) and price. Potatoes and apples cost around a dollar apiece at River City Outpost. It’s certainly not as cheap as shopping at Acme, but it’s comparable to Whole Foods. “When you’re trying to get people to start eating cauliflower, showing them a $6 head of hyper-local organic cauliflower — you lose those people, you turn them away,” says Finazzo. He wants to sell ingredients for a meal for two for under $10: “How can I beat the hoagie? How can I beat six bucks?”

Adam Erace of Green Aisle Grocery, Philly’s veteran fresh-food mini mart, says there’s more demand for neighborhood grocers than ever before — but also more competition. With three stores across the city, he and his brother and co-owner Andrew talk about expanding to New Jersey or the Main Line. But that’s the beauty of these markets: Their focus is so local, and the lack of grocery stores in Philly is so severe, that the city can absorb a lot more without becoming saturated. Asked if he’s worried about competition, Finazzo scoffs. “Hell no, it’s a good thing,” he says. “No one says there’s too many pizza places in the neighborhood.”

Published as “Mr. Rogers Would Have Shopped Here” in the May 2017 issue of Philadelphia magazine.