Epps lets us in on what it’s been like to move from the corporate world to city government. He shares his experience growing up in the segregated South, how he landed in Philly, and how we can make the city less anti-business. 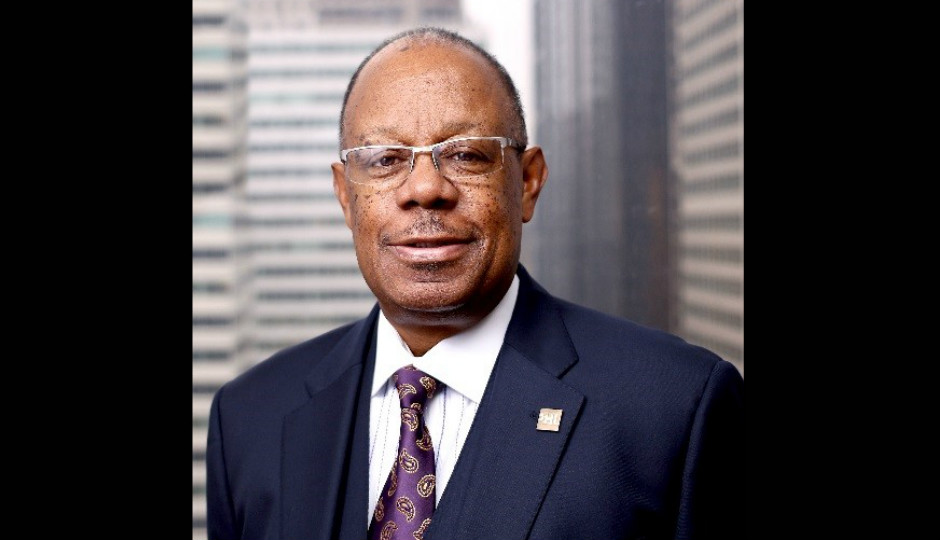 Harold T. Epps became Philadelphia’s director of commerce after 40 years of corporate experience, and the business magnate says he’s loving (almost) everything about his move to city government. Before his appointment to the role, Epps was CEO of the Philly-based PRWT Services, Inc., a $100 million provider of business solutions, facilities management and infrastructure support for businesses. Epps says Philly’s glowing potential is what keeps him going each day. In this interview he shares his experience growing up in the segregated South and how he landed in Philly. He also gives us his thoughts on the soda tax and how to make Philly less anti-business. And perhaps most importantly, Epps lets us in on his obsession with golf.

I am a … North Carolinian by birth. I have lived in Ashton, Winston Salem and Durham. But I say I’m from Winston Salem because that’s where I went to junior and senior high school.

One Philadelphia connection from my hometown is … watching Earl “The Pearl” Monroe play basketball. Earl’s from Philly and went to Winston Salem State University. I’d go watch him play and in 1967 they won the national championship led by his historic season.

I grew up … in segregation. I am old enough to have experienced that. My father was a lawyer. Prior to my being born, he filed a suit with Thurgood Marshall to integrate the University of North Carolina Chapel Hill Law School in the late 40s. Subsequently, he sent his three children to desegregated schools of Asheville, North Carolina in 1962. I came through that era. It was not as physically and emotionally challenging as what you saw on television from Alabama and Mississippi. We didn’t get water hosed but got called the “n” word a lot. And I’m old enough to have experienced the “For Colored Only” water fountains and had to sit at the back of the bus. In spite of that, during those years when there weren’t a lot of opportunities for African Americans, we got taught by some of our best and brightest. If you saw the movie Hidden Figures, those kinds of people were the quality of our teachers. So yes, we had tattered books and hand-me-down books, but we had a lot of love and a lot of care. I had a pretty good education during the period of desegregation. Subsequently, I ended up going to a historically black college in undergrad — North Carolina Central University — where my father went, and I’m now finishing up my eight-year term on the board of trustees. I also ended up getting my MBA from Western University in New England, a small school in Springfield, Massachusetts near where I worked.

A habit I’m trying to break is … carbohydrates. Bread and French fries.

If I weren’t in this role I’d be … doing for-profit and non-profit board work, teaching a course at a university and a playing a lot of golf. I can be retired, but I love what I do and am very happy doing it. I’m very excited about the future of Philly.

I’m inspired by … Philly’s potential in the next decade. In nine years America will celebrate its 250th birthday. I’m inspired by the possibilities and the transformation likely to occur here by that time.

So far the soda tax … is bringing in more revenue than expected and that encourages me because it provides opportunities for the commitments to pre-K and community schools to be met. We await the outcome of the legislation that will determine our ability to fully execute the promise made by the soda tax and that is the full development of pre-K, community schools and the renovations of parks, rec centers and libraries. I’m optimistic about the financial results of the first two months and cautious about the outcome of the legal challenge.

The layoffs … are more anecdotal than fact. If you look at the jobs statistics overall, job growth in the city for the first two months of this year are up over the same time last year. I am sure there are some situations where there have been jobs lost but overall job growth for the city is up. Any time there is a policy, any kind of change made, there are minor adjustments to the status quo. The soda tax will be very positive for the city. We’ll look back a half decade from now and be amazed at how it helped give young boys and girls faith, hope, and opportunity.

Philly can be less anti-business by … coming together to focus on how we can eliminate, streamline and simplify regulations and legislation on the books. We have formed a task force to do just that led by City Council president Darrell Clarke, Rob Wonderling, chair of the Greater Philadelphia Chamber of Commerce, Councilman Derek Green and myself. This should be one indication to the business community that we are willing to reevaluate our present circumstances to make things better. Secondly, Commerce has formed BLAG, the Business Legislation Advisory Group, to be a filter between Council and the business community on how we make the city less bureaucratic and more business friendly. The Mayor and the budget continue to reduce the business income receipts tax and the wage tax over the next decade. The gap between the city and suburbs is at its lowest point in 15 years. We do have a tax task force that’s also going to evaluate all of the taxes on the books to determine how we simplify, eliminate and streamline those. Efforts are being made. We are going in the right direction, but we need to go faster. We should be giving evidence to the business community that we are open to making changes.

The transition to the public sector has been … rewarding. I spent 40 years at major and middle market companies and at many levels of leadership. And I get to bring those experiences to this job at a time when Philly is going through a historic transformation.

The Philly workplaces I admire … are those that do well through a diversity and inclusion lens. What is the composition of your board of directors? Are there people of color and women? What about your exec2utive suite and workforce in general? What ‘s your level of engagement with minority and women-owned businesses? And what’s your level of community engagement?

Philly won’t create more jobs until … it is more committed to diversity and inclusion. And fully committed, in all segments and on all levels.

My talent is … networking and connecting.

Philly corporations can support Philly startups by … finding ways to invest. And it can be like church, either with their time, talent or tithes. Our level of integrated support for the startup community is better than it was ten years ago, but we are nowhere near being first quartile because we underinvest our talent, our time, and our dollars.

My favorite things about Philly in the springtime are … the cherry blossoms, getting out to golf, and being able to walk to work without an overcoat.

Right now, small businesses in Philly need more … technical assistance and that includes financial planning, financial literacy, and marketing supports. They need more capacity and readiness to be completely prepared to take advantage of the significant opportunities that will be available over the next decades. We need to open up the system o proactively bring small businesses to the table. Right now people are locked out. And institutions need to raise their level of commitment to small businesses. One way is by paying them quicker for their goods and services within 30 to 45 days.

The hardest part of my job is … getting used to some of the paces of government. The private sector has a lot more latitude to move at a faster pace because it doesn’t have some of the policy and legal requirements that government has.

An immediate priority of mine is … to reduce my golf handicap, personally. Professionally, to implement plans to facilitate job creation to reduce the poverty rate. Our greatest challenge is the poverty rate so everything needs to be about job readiness

The Commerce Department is traveling around Europe and Asia because … we are trying to lift Philly’s brand for international companies to recognize we are here. A few companies have already committed to Philly as opposed to New York as a result of our trip to Germany. We are also recruiting Asian airlines to have nonstop service to Philly. We’re the largest city in America without nonstop service to Asia. Airports are economic engines for the region. With nonstop service to Asia, we’d increase the number of people coming to Philly. And Philadelphians won’t have to travel to D.C. or New York for those international trips. 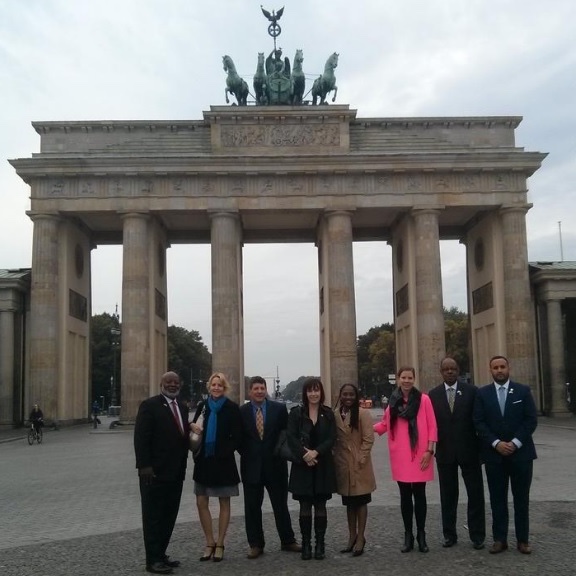 The Commerce Department at Brandenburg Gate in Berlin, Germany.

My snack of choice is … yogurt.

Philly’s wage equity law will … hopefully continue to bring parity to compensation for women and people of color. Right now there is disparity so I support the principles of the law.

We’ve launched Gateway Philly because … the marketplace is telling us that millennials who work and play in cities would prefer not to reverse commute. So we launched it as another tool to entice suburban companies to open satellite offices without a strong real estate commitment to the city. We want them to test the benefits of being in the city to hopefully recruit them to have a long-term major presence in the city.

On Saturdays I … golf. On Sundays I go to church in the morning with my wife and then I go play golf in the afternoons. I deliberately live in a high rise so I don’t have to do any maintenance work. So that’s how you’ll always find me on the golf course.

Something government can borrow from the private sector is … the pace of change for sure. We need to move faster.

I’m excited about … the NFL draft.

A social issue I care deeply about is … education. It is statistically proven that education is a determinant of the kind of adult life a child will lead.

The best career move I’ve made is … being willing to move to where the job was. I’ve moved from North Carolina to Massachusetts to Wisconsin. And from Wisconsin to Indiana and then to Pennsylvania. If it weren’t for those moves I wouldn’t have had the opportunity to be the CEO of a $100 million company in Philly. Careers are rarely a straight line. You have to go get it and it may be geographically all over.