Here’s everything you need to know about the new wireless service.

Comcast is getting closer to launching its wireless service, and on Thursday, the telecom giant released more details about its upcoming plunge into the wireless phone space.

The most important detail revealed Thursday morning is that Xfinity Mobile will only be available to Comcast customers who already pay for home Internet. The goal here is to create more value for Comcast customers with even bigger bundles. The wireless service has been designed to support Comcast’s core cable business, Comcast Cable president and CEO Dave Watson said on a call with investors on Thursday. With 29 million customer relationships, Comcast plans to target its existing customer base, Watson said.

Most Comcast customers will be able to subscribe to an Xfinity Mobile plan with unlimited data for $65 per month for each line, but customers with more expensive X1 TV plans will be able to pay just $45 per month. Comcast is also offering a pay-by-gig monthly option that costs $12 per GB of cellular data, allowing customers to pay for what they use.

Are these prices the cheapest? Not quite. But according to Comcast, they’re competitive — customers will be able to save up to 40 percent a month on their wireless bills, compared to the industry average. Comcast also won’t charge those pesky line access fees, and pay-as-you-go customers can switch over to an unlimited plan at any point with no penalty. And depending on the plan, users will be able to choose between Apple, Samsung and LG phones.

Through a partnership with Verizon that dates back to 2011, XFinity Mobile will leverage Verizon’s extensive cellular network and marry it with Comcast’s 16 million Wi-Fi hotspots. This means calls will go through on Verizon’s 4G LTE and data and video will rely on hotpspots, whenever possible. XFinity Mobile will autoconnect users to the hotspots “to take the friction and hassle out of WiFi,” said Greg Butz, president of Xfinity Mobile. Customers won’t have to wonder what hotspots are available and they won’t need to enter any passwords. The service will “autodiscover” and “autoauthenticate” the connection. “Customers love WiFi because it’s faster, and it helps them save money,” he said. According to the company, more than 80 percent of the data that people consume on their mobile devices is over WiFi. 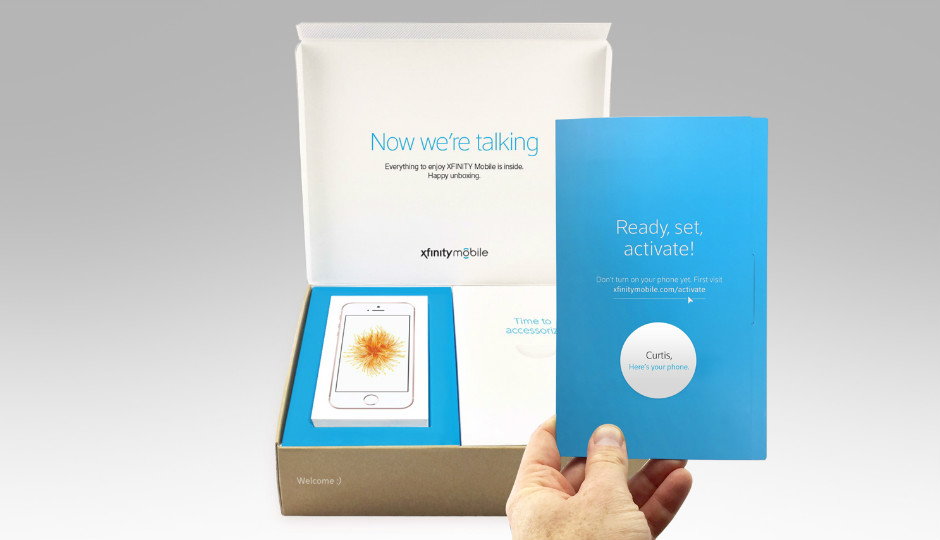 Comcast will ship phones in a personalized box. Image courtesy of Comcast.

Comcast’s hybrid WiFi and cellular service has been in talks for years, and the company recognizes that it must overcome customer experience challenges as it moves to launch the new service. In a nod to better service, Xfinity Mobile will have personalized 24/7 support through text messaging. If you’re wondering when your next payment is due, you can text the question through the app and an actual human from their support center will reply.

For Comcast, the new service will allow it to add a new revenue stream as consumers continue to abandon pay-TV subscriptions for streaming services. Competitors like AT&T and Charter Communications are only getting bigger and more aggressive through mergers across the media space. Analysts still speculate that Comcast may want to acquire T-Mobile one day.

Comcast has been testing Xfinity Mobile through limited employee trials and expects to launch the service for customers mid-2017.