How Philly Finally Embraced the Bidet. No Bullshit!

People have bum-rushed to buy bidets these past two years. Here’s how the trend has fared for local residents. 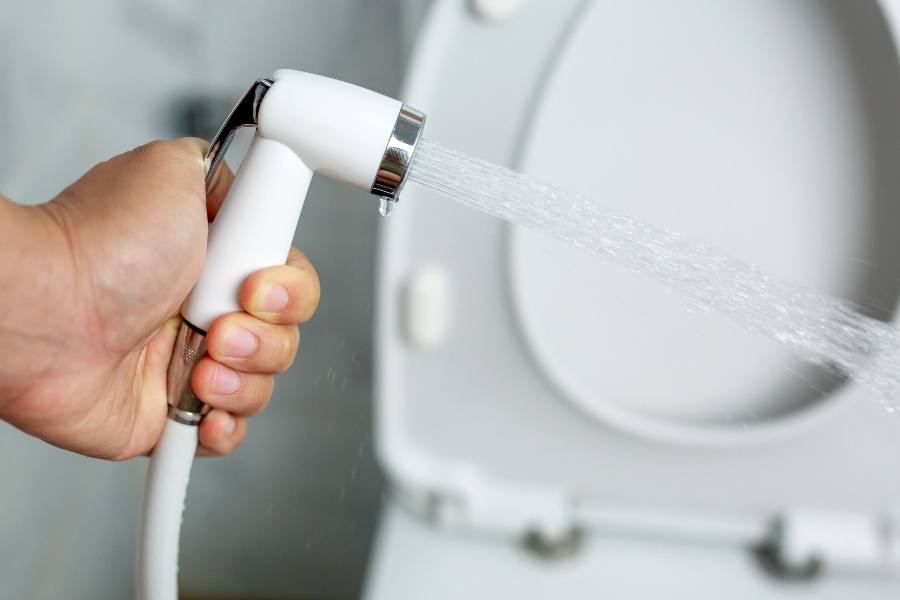 Bidets have become increasingly popular among Americans since the start of the COVID-19 pandemic. / Photograph courtesy of Getty Images.

Until I was about 14 years old, I thought only two types of bathroom-goers existed: Those who use toilet paper and those who use wet wipes. But then I traveled from my home-base of Northeast Philly to Europe for the first time on a school trip, and quickly got a culture lesson upon seeing an unfamiliar contraption next to the toilet in my Italian hotel bathroom. My roommate and I were equally confused and wondered what the hell we were supposed to do with another, much smaller porcelain basin — especially because this one had a hose. Though curious, we decided against tinkering with it and let the strange-to-us fixture remain an untouched enigma for the rest of our stay.

The moment was a marker of my American naivete. Bidets have been around for centuries, reportedly first appearing in France in the late 1600s to early 1700s and subsequently becoming popular throughout Europe, Asia, Latin America and the Middle East. Today, several European countries, including Italy and Portugal, legally require that any bathroom containing a toilet also has a bidet, and more than 80 percent of Japanese households have some kind of toilet-bidet technology.

Despite this, Americans have never really embraced the concept of washing one’s nether regions after going number two. (Though I used to know someone who took a shower after every bowel movement, which seemed way overboard to me.) It’s likely because, in the U.S., bidets have long been associated with “sin” and “impurity.” Women frequently used bidets for douching — a hygienic practice that became historically tied to birth control (*gasp*) — and for a more pleasant and less messy cleaning experience during menstruation. (While progress has been made, period talk is somehow still taboo.) During World War II, American soldiers were said to have seen bidets in brothel bathrooms, which only contributed to bidets’ bad rap in this country.

Mostly due to pandemic-induced toilet-paper panic and increased emphasis on hygiene, bidets are now growing in popularity in the U.S. (Finally!) Japanese company TOTO — which is currently the world’s largest toilet manufacturer — sold out of its electronic bidet seat inventory for U.S. customers during the first two weeks of the pandemic. And Tushy, a New York-based bidet company founded in 2015, saw sales increase exponentially, reaching a million dollar sales per day in March of 2020. It seems that with more people going number two at home, the bathroom accessory had become a number one item.

The trend has caught on locally as well — and for a variety of reasons. Jon Lyons, co-founder of Strength Haüs and WE/FIT director at City Fitness, became a bidet devotee early in 2020, not because of a lack of toilet paper, but out of a need for more self-care. “Because of the pandemic, I upgraded my skincare routine and began meditating regularly, and the bidet was one of those ‘you deserve this’ buys,” he says. “Every time I use the bathroom, I walk out feeling like I got a tiny shower, and now have a forever-clean butt.”

Philly barre and HIIT instructor Lauren Leavell says the butt-spritzing machine was a must-have when she moved into her home mid-2020. “If you are anything like me, you have been home A LOT this year and sitting on your own dang toilet. So why not upgrade your bathroom?!” she wrote in an Instagram post raving about her bidets. (She has two!)

Bidets have become super appealing to many folks, including Leavell, as they have been said to be an eco-friendly alternative to toilet paper. Americans account for over 20 percent of global tissue consumption, using about 140 rolls of toilet paper per person every year. Manufacturing toilet paper can involve up to 37 gallons of water (versus the average one pint of water needed for a Tushy bidet) and is generally terrible for our tree population. “When you are choosing to use a bidet, even though it’s water-based, you’re actually going to be saving water in the long-run and not having to consume paper products that require — in addition to water — cutting down trees,” says Kate Knibbs, senior writer at Wired, in an interview with NPR.

Large amounts of toilet paper — or worse, wet wipes that aren’t actually flushable! — can also wreak havoc on the sewage system. (And, truly, nobody has time for backed-up plumbing in this city.) Plus, bidets range in cost, and there’s an abundance of inexpensive options out there — some are as low as $25. Leavell and Lyons both say they’ve saved money by barely using toilet paper anymore.

For others, the hygiene and health benefits are major pulls. Sam Samore of West Philly says they decided to invest in a bidet because they were sick of spending so much time wiping. “I have hemorrhoids, so it’s really in my best interests not to have to wipe (much),” they add. (Though using more-intense settings and hotter temperatures can sometimes make hemorrhoids worse.) For Norristown resident Paige Ferguson, using a bidet has made the bathroom-going experience a bit more pleasant, especially as a person living with IBS.

Nakea Murray, principal vagician at Vtox Intimate Health & Wellness in Bala Cynwyd, says her portable bidet has been a game-changer, not just after using the bathroom, but also “as a rinsing option for vulva care after urination and during my menstrual cycle.” Even though the vagina is self-cleaning, Murray says a bidet leaves her feeling cleaner skin-wise and more confident in her intimate health.

No matter what’s going on down there, it seems a question a friend of mine posed after purchasing a bidet of their own last year rings true: “When your dinner plate gets dirty, do you expect it to get clean by wiping it with a dry paper towel?” As compared to toilet paper and wet wipes that just smear your business around, can irritate your skin, and even cause skin tears, bidets help remove residual fecal matter, resulting in a less dirty anus. (BTW: You still should wash your hands after using a bidet, especially because you’ll likely be patting dry with a towel or blow dryer.)

Our contributors agree that learning how to use a bidet can be a matter of trial and error. Ferguson recommends making sure you’re seated before turning on the water “unless you’re trying to shower the walls of your bathroom, too,” she says. Lyons adds that “you will 100 percent squirt your bottom in all different areas until you figure out the ‘target,’” which can take a little bit of practice. (But try to laugh through it, he says.)

Overall, having a bidet has made the users we spoke to more mindful about — and even re-evaluate — common hygiene practices. Laura Cadge of Ardmore, who bought her bidet this past September, says cleaning one’s tush with water after a bowel movement is similar to washing other body parts after coming into contact with bacteria: “We wash our hands, hair and bodies when dirty, so, why not wash our … you know!” Lyons echoes this, claiming that “whoever decided ‘smushing paper between butt cheeks = clean’ was out of their damn mind.”

Bidets have also prompted home and design upgrades for some. “My bidet has inspired me to generally deck out my bathroom,” Samore says. “I got a squatty potty. Looking to buy some incense matches. I want a holistic luxury experience.”

The only detriment our contributors have experienced so far is the fact that not every bathroom has one. “Pooping in bathrooms without bidets has become much less bearable. Doing so makes it hard to understand why they aren’t universally available,” Samore says.

All in all, our “butties” agree: Once you go bidet, you can never go back.