Philly native Warren Knight, who lost his vision due to glaucoma, will participate in a segment of the inaugural Achilles Resilience Relay — a 650-mile marathon celebrating athletes with disabilities. 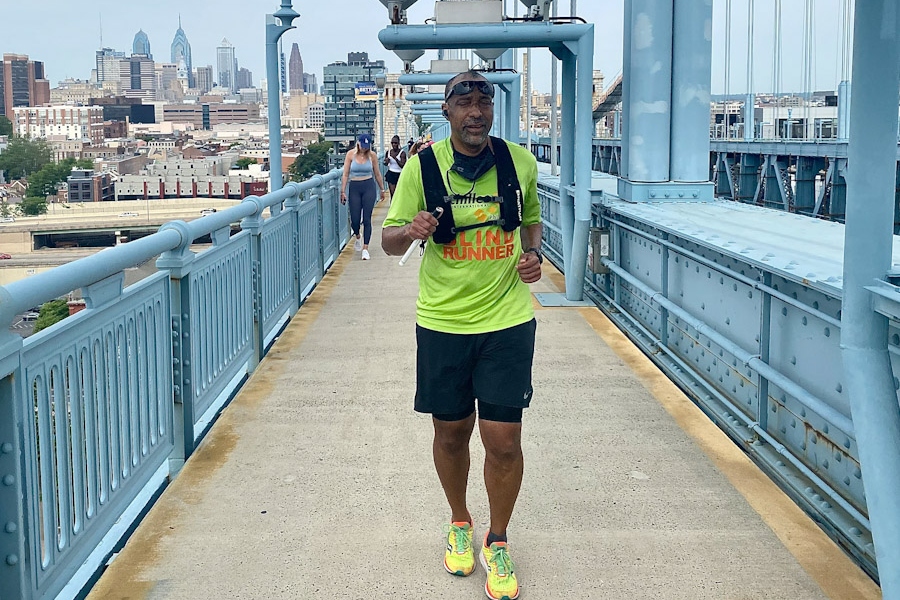 At 53, Chestnut Hill resident Warren Knight has achieved several feats in his first three years of running races: he completed both the Broad Street Run and Philadelphia Marathon two years in a row, ran several international races, and was named Athlete of the Year in 2018 by local running group, Philly Achilles. And now, he’s repping Philly in a new long-distance relay that spans North Carolina through New York City.

And all of this Knight has accomplished after losing his vision in 2014.

Knight, who is originally from Mount Airy, spent his early life fairly active: rollerblading and riding his bike around his neighborhood, and running cross country and track in high school. But seven years ago when Knight was in his mid-40s, he began seeing tiny floaters whenever he opened his eyes. After multiple doctors appointments, Knight learned he had developed glaucoma. “The disease rapidly progressed,” he says. “Before I knew it, I was blind.”

Shortly after, Knight went to the Colorado Center for the Blind with the support of the National Federation of the Blind. There, he “learned how to be a blind individual,” training his mobility in relation to his vision loss. Knight says he also spent time hiking in the mountains and kayaking — both of which ignited his former passion for physical activity. So when a friend of his back home mentioned that they were running with Philly Achilles — the Philadelphia chapter of Achilles International, a global organization supporting athletes with disabilities — Knight decided to follow in his friend’s footsteps, joining the local group when he returned to Philadelphia in January of 2018. “I hadn’t run since Ronald Reagan was president, but it was the best decision of my life,” he says.

This February, when Knight heard about Achilles International’s inaugural Achilles Resilience Relay — a 650-mile run/walk/wheel up the East Coast — he knew he had to participate. “I’ve made a lot of friends from coast to coast because of Achilles International, and we are always rooting for each other, even from afar,” Knight says. “I knew the Resilience Relay would be a great opportunity to connect with my community, and also support the military veterans who are participating as part of the Achilles Freedom Team.”

The event, which officially begins this Saturday, starts in Charlotte, North Carolina, passes through Philly 11 days later, and ends on July 10th in Central Park. The entire relay will be covered by over 150 Achilles-affiliated athletes and their guides, each of whom will participate in a portion of the route. Along the way, athletes will receive and pass on a baton to represent and celebrate “inclusion, perseverance and the unifying power of sport,” according to Emily Glasser, president and CEO of Achilles International. Knight is scheduled to receive the baton in Logan Square the morning of July 7th and pass it on three to five miles later.

Knight says the upcoming relay is a testament to not only his journey, but the achievements and endurance of other folks living with disabilities. “One of the key things I learned when I was out in Colorado is the importance of living the life you want, no matter what,” he says. “Unfortunately, people with disabilities can often find themselves restricted due to issues with support or accessibility. But Philly Achilles and Achilles International have been immensely supportive of me and others — their guides are there 24/7, no matter the weather. I feel blessed because of that.”