Why Is Communicating in a Mask So Damn Difficult?

Experts say it’s more than just the itch and sweat that makes masks uncomfortable — but there are a few ways you can communicate more effectively while wearing one. 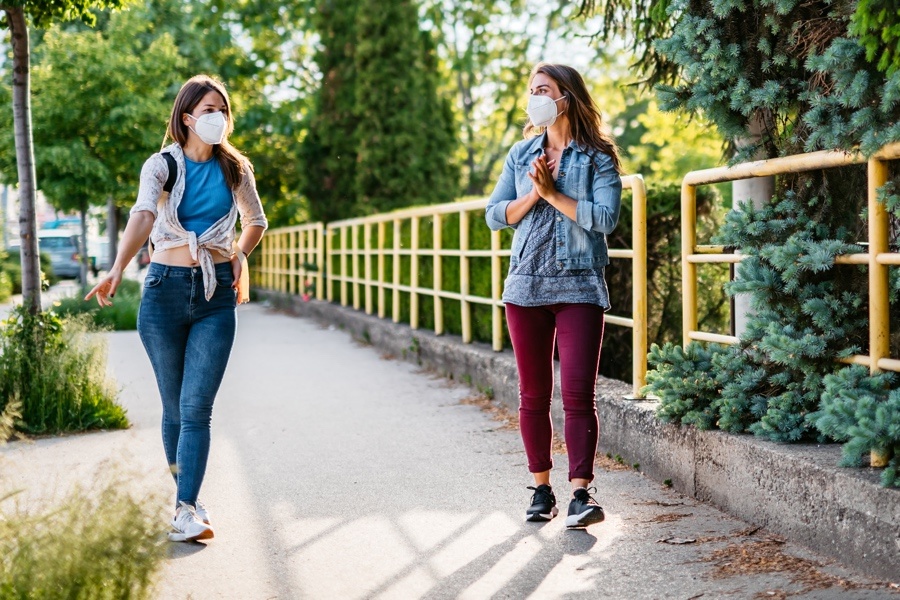 Why does communicating in masks feel so difficult? | Photograph by Getty Images.

Today I smiled at three strangers. I smiled at a man in a grocery store to indicate that yes, he should enter the aisle first, and then again when I made accidental eye contact with someone on the sidewalk. I also smiled at the barista when I picked up my iced coffee from the coffee-shop window.

All three met my grin with blank stares. Or maybe they were smiling, too — who can be sure these days?

Those of us who are in the unhappy position of living in densely populated areas have grown accustomed to being hot, itchy and sweaty while out in public, which, considering it’s August on the East Coast, isn’t all that unusual. Masks are lifesaving essentials, but that doesn’t mean they’re comfortable. Sure, there’s itch and sweat and, if you’re like me, the onset of “maskne” (mask-acne), but the biggest challenge I’ve had to adjust to is the dramatic change in communication.

When communicating, we use both words and facial expressions to convey meaning. We tend to use the whole face to interpret what people are saying and feeling, psychologist Rebecca Brewer recently told the BBC: “When we cannot see the whole face, such holistic processing is disrupted.” Now, a simple “thank you” can trip us up. Without a smile to guide us, it’s difficult to determine whether that’s a genuine show of appreciation or a sarcastic comment.

Our in-person conversations, it seems, have begun to mimic the ambiguity of texting. Coupled with other hurdles like muffled voices and cases of mistaken identity, our public social interactions have become a lot more complex.

But a deeper unease underlies these smaller inconveniences. Sharrona Pearl, a professor of medical ethics at Drexel, wrote in the Washington Post in May, “We look at people to know them. When we can’t look at them, we feel we know and trust them less. And when we can’t show our own faces to the world, we may feel we are hiding something.”

The upshot is that whether we’re with friends or out at the grocery store, we’re likely to feel distant — more than simply six feet distant — from others.

“With everyone in masks, we essentially live in a world without smiles and friendly faces,” says Kareem Johnson, an associate professor of psychology at Temple. “We are actively discouraged from making connections to other people. We are increasingly cut off from family, friends, work colleagues and even strangers we might pass on the street.”

Simple communication issues stemming from face coverings, such as the inability to read emotions or decipher muffled voices, have a simple fix, but one humans have been shown to avoid.

“The antidote to that, we know from the research, is to actually get more curious, and to ask each other, rather than assuming,” says Michelle McQuaid, a wellness expert and founder of the international Wellbeing Lab,“Questions like ‘Hey, what did you mean by that?’ or ‘Hey, what are you feeling right now?’ The masks give us permission to ask for more clarity, and maybe that would be a helpful skill to have in a non-mask-wearing world of the future.”

It’s the inherent feeling of distance, reinforced by having the faces of everyone around us partially hidden from view, that provides the biggest challenge.

“The lack of friendly faces and social connection easily contributes to feelings of isolation, which could worsen any pre-existing feelings of anxiety, depression, loneliness or despair,” says Johnson. “My fear is that a growing sense of isolation may exacerbate feelings of despair from lost jobs, deceased loved ones and other stressors.”

The discomfort and feelings of isolation we experience when covering our mouths is in many ways unique to mainstream U.S. cultural norms. Many Muslim women who wear niqabs or burqas, for example, in both the United States and abroad, are accustomed to using their eyes to convey emotion. People in countries such as China and Japan have long since normalized mask-wearing to protect their fellow citizens from infection and filter air pollution.

Before the novel coronavirus arrived at our shores, masks worn outside the context of an operating room in the United States often cast unfair impressions of untrustworthiness and furtiveness onto their wearers. Combine that with another facet of American culture — our particular mix of strong systemic racial inequalities and prejudices — and current mask-wearing becomes even more dangerous to Black and brown Americans.

“I’m concerned about incidents of police getting called on Black men wearing masks and more opportunities for unnecessary uses of force,” says Johnson. “The irony of that is, the masks meant to save lives may be yet another potential threat.”

Mistaken identity is also an issue across the board — it’s just hard to recognize someone wearing a mask, even a friend or relative. But people of color will likely deal with even more instances of mistaken identity from white folks, which can be emotionally draining and frustrating — it’s a type of microaggression that signals to people of color that white people regard them as “others.” Research has shown that people tend to have more difficulty recognizing and remembering faces of people who are of a different race, and masks will exacerbate this already-existing issue.

To avoid these pitfalls, be cautious when shouting to a friend or co-worker you think you recognize in the aisle at Trader Joe’s. Proceed with care and respect, and acknowledge that masking makes identifying others more challenging.

Deaf and hard-of-hearing Americans are also disproportionately affected. Their primary means of communication with the general public — lip reading — has effectively vanished. What’s more, their disabilities are largely invisible, so most people tend to assume everyone can hear when they communicate verbally, rather than realizing the person they’re communicating with may be deaf or hard-of-hearing.

There are many ways to be more considerate of the deaf and hard-of-hearing community, but chief among them is using visual cues and gestures as a first resort when communicating in public. For example, you don’t need to know ASL to signal that someone should get in line ahead of you.

As we plunge into an uncertain future — one that could possibly involve a year or more of donning masks — learning to navigate both the emotional and the physical distance is imperative. We can start with acknowledging that it’s a lot harder to communicate these days, and work a little harder to understand one another. An important key to all of that? Body language.

“The good news is that we can still communicate a lot with our eyes, our tone of voice, and our gestures,” says Johnson. “We just need to pay attention to those other social cues. So maybe one possible benefit of everyone wearing masks is that we might all be able to become better listeners.”