Adrienne Dolberry, co-owner of Studio 34 in West Philly, shares how mirror talk and meditation helped her get sober and run a wellness studio. 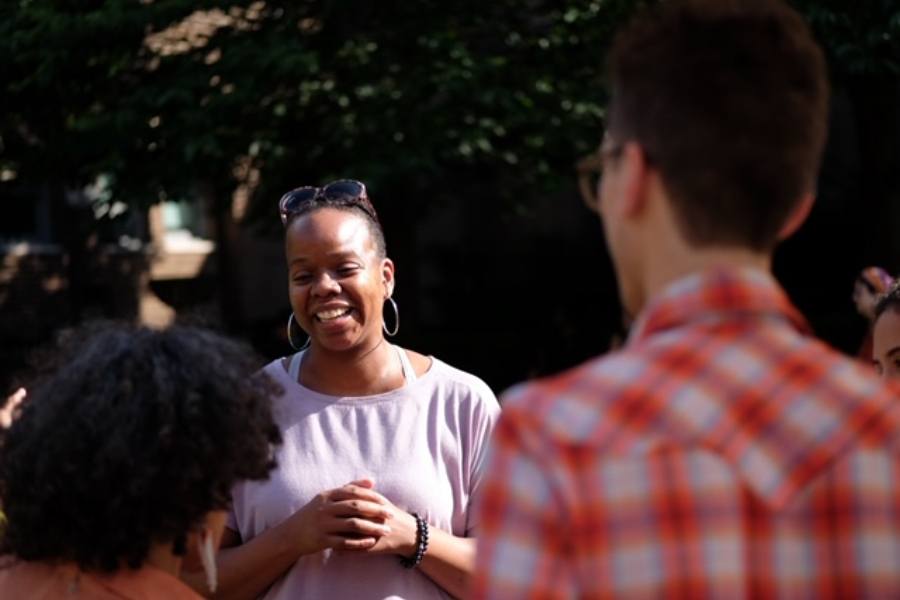 Adrienne Dolberry is the co-owner of Studio 34 in West Philadelphia. / Photograph by Hanbit Kwon.

Welcome to How I Got Here, Be Well Philly’s look inside the entrepreneurial journey of fitness and wellness business owners in the Philadelphia area. In their own words, they share their stories — including the triumphs and obstacles — of starting and running a business.

It was 2006, and I was a stressed-out graduate student, fearful of what was next for me after graduation. At the time, a good friend told me about “mirror talk,” a technique that encourages you to be alone with yourself and say aloud whatever comes to mind, even the things you are afraid to say with nobody else around. Nervous, but intrigued, I tried it. The experience opened up old wounds of childhood trauma — feelings I had consistently kept numb with alcohol and drugs. Sure, I had done meditation before, but amplifying it with mirror talk allowed me to be more expressive and less guarded with sharing my wants and needs.

As time went on, my mirror talk evolved into audio journaling. This allowed me to record my thoughts and then play them back to not only listen to what I was saying, but how I was saying it. I paid attention to the texture of my voice — Did I sound clear, confused, light, heavy, or jumpy? This deepened my overall self-awareness to understanding how I was feeling instead of assuming how I felt. It was also the first time in a very long time that I didn’t touch any alcohol or drugs.

As I entered into academia as a Biology professor, I started working with college students who had their own struggles. My fellow colleagues also noted how the grind of academia impacted their health and home life. As a result, I began hosting workshops where I passed along my tried-and-true mindfulness tools. I really enjoyed facilitating the workshops, and continued sharing my love for meditation, self-talk, and breathwork once I became an advisor at a medical school in 2011. Doing so showed me the connection between healthcare and student success, as well as the power of being present with oneself. A beautiful part of this was that the majority of the attendees were Black and Brown students, faculty, and staff, which was incredibly important to me. We, as people of the global majority who face racism and battle white supremacy every day, could have a nugget of peace for ourselves — to breathe and be with one another in a way where we could be centered before entering back into a world that centers whiteness.

When I returned back to Philadelphia the following year, I ended up at a medical school whose environment was more corporate and less personable than my previous position. After being alcohol- and drug-free for almost four years, I relapsed. I was functional before, but now, the pressure from work and a lack of support from my family led to a breakdown. I thought my practice was no longer working. After only six months, I quit my job and moved into my family home. Looking for jobs and trying to start my own business in student support was hampered by my ever-increasing alcohol and drug use. I felt like a failure to my family, community, and myself. People close to me would ask why I “threw away my career” or “couldn’t hack it,” which made me feel even more alone.

Then, in 2014, I enrolled in an organizational development and leadership program. One of the classes in the program — “Career Theory and Development” — coached us on our next career steps based on characteristics like personal strengths, values, and family origins. After this course, I got additional guidance from professionals in the wellness field on how to further share my meditation practice with others. The biggest piece of advice I received: go on retreats and experience your practice more deeply. From there, I started attending retreats, where I would audio journal before and after to capture the shift in my thoughts and the texture of my voice as I began exploring my strengths and areas of growth. I discovered I was resistant to let down my guard, and needed to be more accepting of being vulnerable with living in ways that were not for the pride of family, friends, or societal expectations. I turned that realization into a guiding question, “How could I be accepting of living my life in a way that allows me to compassionately put myself as a priority?”

But even this big step didn’t lead to sustainable sobriety. During conferences and retreats, I’d participate in the daytime sessions and networking, then spend my evenings drinking alone in my hotel room. Even with the silent retreats and meditation sessions, I wasn’t truly valuing my life. Dangerous ultimatums, including suicide, crowded my mind, as the comprising relationship I had with alcohol and drugs wasn’t working anymore. In my mind, I’d rather die quickly than experience anymore of this slow death. Still too scared or prideful to step foot in an AA meeting, I turned to acupuncture instead. After my first session, I felt no big push to run away or to use. In fact, I felt nothing, as though the energy of pulling and fighting with drugs and alcohol leaked out of me and on to the clinic floor.

On November 7, 2016, I got sober. In the following months following my sobriety, I connected with another wellness enthusiasts and put together my first one-day wellness retreat. I also continued to fine-tune my meditation classes and further connect with folks and find part-time work in the wellness field. One of my wellness gigs involved teaching kids’ yoga for the Free Library of Philadelphia‘s Wadsworth Branch. When the preteens kept saying, “I feel better now” after their session, I was encouraged to explore my yoga practice even further through Studio 34’s teacher training program, which I began in July of 2017. During this time, it became clear to me that I wanted to have Black people, especially women, as the priority in who I served at the event, so that we could share space in a retreat-like atmosphere to move, unwind, and expand our knowledge on how to cultivate more of the self-care that we deserve. After this second event, I knew I wanted to create a permanent wellness space for these women and those in my local community.

My original plan was to volunteer at wellness studios and develop a business plan, including a 10-year plan to create my own wellness center. Unbeknownst to me, one of the founders of Studio 34 Yoga, was about to speed up my plan. A week after the second wellness event, Angie Norris approached me after teacher training and asked if I could help take over the studio. She was listening to my plans and noted my work, feeling that I would be the best fit for moving the studio in a new direction. Hearing that someone was listening to my intentions and taking them seriously was refreshing!

I’ll be honest, though, transitioning businesses to new owners is hard! While I wasn’t exactly new to Studio 34, I was still navigating the studio’s culture, especially from a business angle. I worked as a sole proprietor with my own academic coaching business, and also took classes at and received mentoring from Temple’s Small Business Development Center. At one point, things got so stressful for me that I landed in the hospital with ulcerative colitis, an autoimmune disorder. After three blood transfusions and slowly regaining my strength to walk again, I was left with sores all over my body and a new outlook on how I needed to manage my business in the wellness field to move forward. I realized that working in wellness doesn’t make me immune to stress, feeling isolated, and getting sick.

Throughout my entrepreneurial journey, increasing the presence of Black and other POC members in the wellness space has always been top priority. I added POC yoga to the schedule, and increased outreach in our community, including working with Kingsessing library and having a table at Philly’s Uhuru health festival. I also joined PhillyCAM to document other Black women who had switched careers and entered the wellness field. We are in the post-production stage of The New Healer, which showcases the deep act of Black women surrendering back to themselves, releasing the ‘script’ family and society places on us, and reclaiming tools to reconnect with ourselves through internal work. This creative project also provided me with a sense of belonging.

During the coronavirus pandemic, my strength of creating systems has shown up by developing our online subscription service, thanks in part to recruiting support from Janessa Modestin. The early recruitment of specialists has allowed me to develop ways for the studio to stay afloat during this time, including donation-based live-streamed classes. I feel more engaged and also thankful for the community support from Studio 34, and how they have held us during a time that has been difficult for many studios.

Instead of looking too far forward, I’ve taken things day-by-day, acknowledging that the rough starts have developed into strong, supportive relationships with many people. Being present and surrendering to the current moment is a difficult task, but one I am practicing. I still work on my voice through audio journaling and mirror talk, and continue to create outlets for other Black women in wellness to bring their voice to the forefront. In both business and personal life, I’ve learned that vulnerability can become less scary when I commit to supporting others and remind myself of the support that is always present around me.