We’re Obsessed With This Eagles Cheerleader Competing on American Idol

Kyle Tanguay, the first male cheerleader for the Eagles in three decades, is killing it — and it's only been one episode. 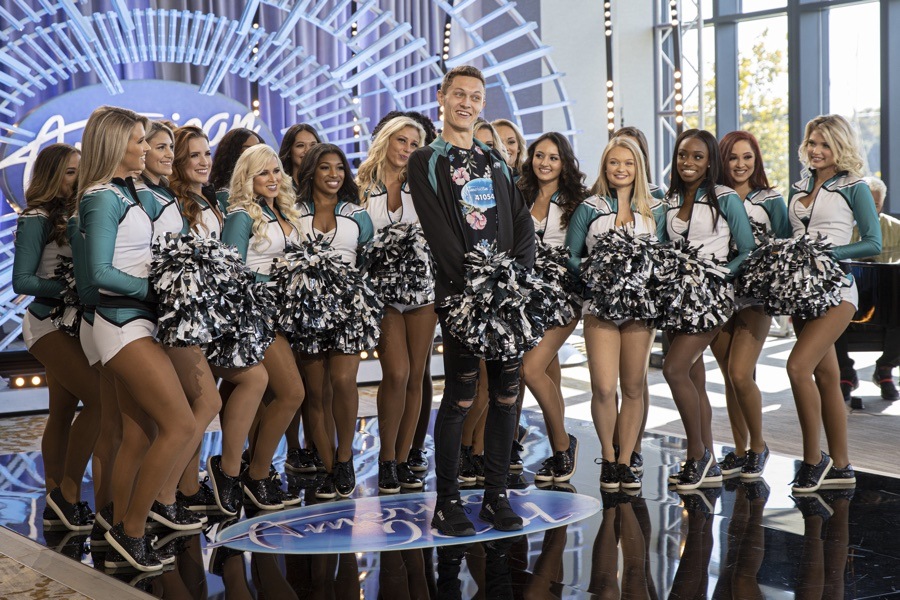 In his audition on the new season of singing competition TV show American Idol, the best part is when the entire (VERY excited, VERY Pom-Pom-waving, VERY adorable) Eagles cheer squad shows to support him. The squad performs a cheer for him in the audition room in front of celeb judges Lionel Richie, Katy Perry, and Luke Bryan. And, as it turns out, the he’s not only a team player with the support of his (literal) squad, but he’s also got a pretty damn phenomenal voice — his rendition of Mercy by Shawn Mendes was legit swoon-worthy! (You can see a video of it below.)

Tanguay, who is 21 years old and grew up in New Hampshire, moved to Philly in 2017 to study at University of the Arts. He’s currently living in Washington Square West and cheering for the Birds. And the craziest part: this is his first time singing in public! (Yeah, no pressure at all.) We caught up with him to quickly chat about his stellar vocal performance, how he got the nerve to audition, and his first year with the Eagles.

Philadelphia magazine: Do you have much singing experience?
Kyle Tanguay: I have very limited singing experience. I performed in a few musicals in high school and I was part of chorus in high school. My music teachers opened my eyes to a whole new realm of performing, but I always had my eyes set on dance. It wasn’t until my confidence grew and my interest in other performing arts widened that I thought it would be cool to explore singing on a professional level. When I attended my first American Idol audition in Washington, D.C., I still had never had a one-on-one private singing lesson. Since then, I have been fortunate enough to work with a voice coach to see how I can cultivate my voice into one that is worthy of being the next American Idol!

That’s an exciting leap! How did your time as an Eagles cheerleader influence your decision to audition?
I just completed my first year and it was an amazing season! Auditioning for this squad was one of the greatest things I have ever done. The Eagles organization and the Eagles fan base have encouraged me that it’s always okay to show who you are and be proud. Seeing so many people support me really helped my confidence and enabled me to take a step outside of my comfort zone. 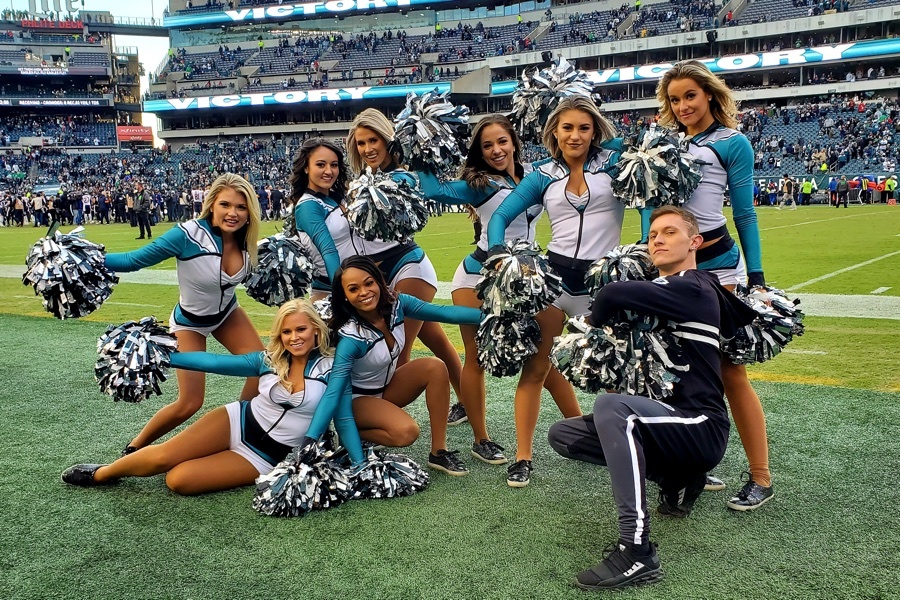 Courtesy of the Philadelphia Eagles Cheerleaders 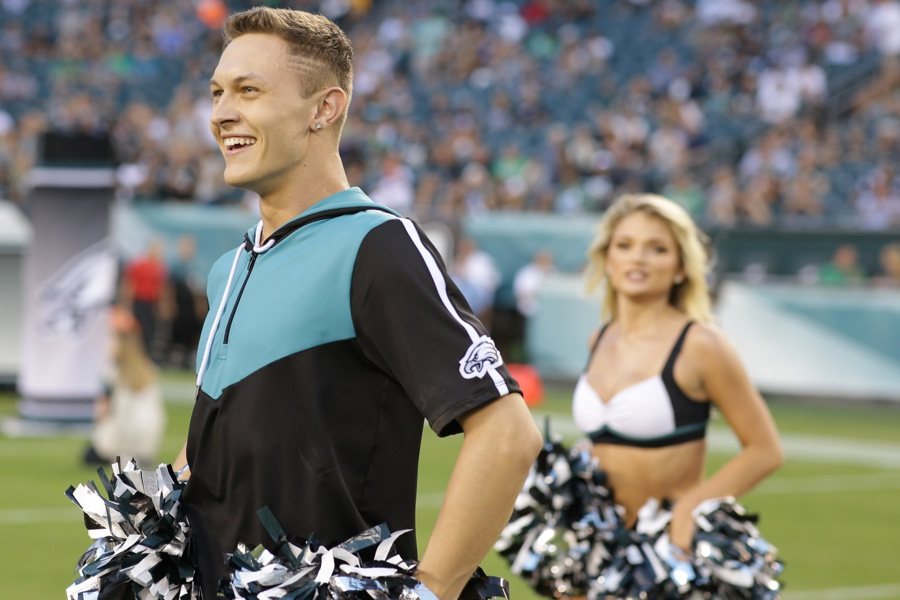 Courtesy of the Philadelphia Eagles Cheerleaders

You crushed that Shawn Mendes song. How did you decide what to perform?
I had never performed a pop song solo in my life, so it was really hard to decide. I found a song that I thought could compliment my voice while also allowing me to showcase some stage presence and emotion.

What was the most surreal part of the whole American Idol experience?
I don’t even know where to begin! Receiving the golden ticket was one of the greatest moments I’ve experienced in my life. It meant so much to me that Luke Bryan, Katy Perry, and Lionel Richie see potential in me. I’ve looked up to all three of these music icons for quite some time now, and to hear people who inspired me say such positive things left me in awe. They were so supportive of my dream, and I am excited to show them that I am willing to put in the work and grow as fast as I can. 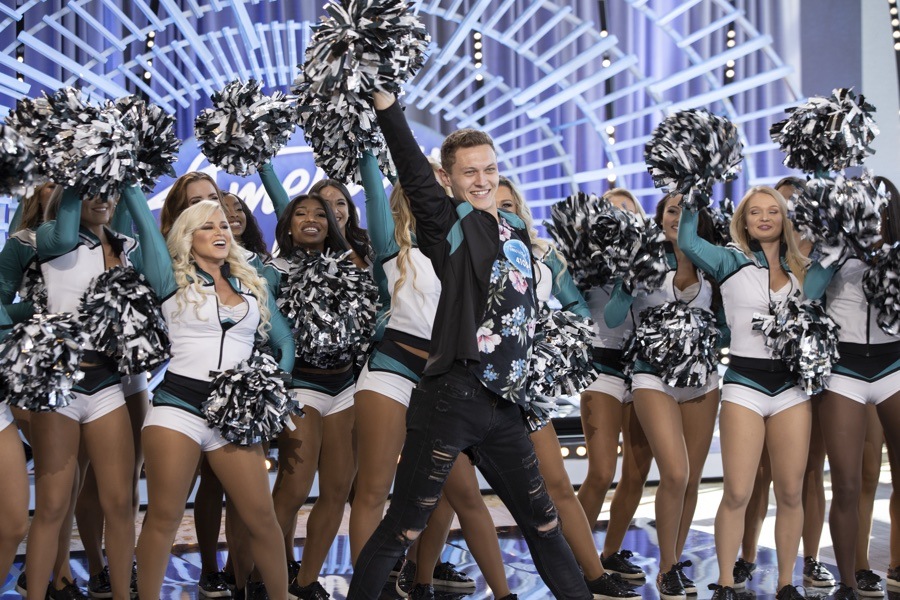 What’s your favorite part about being an Eagles Cheerleader?
There have been so many highlights but if I have to select just one, it would be representing the organization in the community. As an ambassador of the Eagles, I have been able to contribute to making a positive impact on the lives of others through involvement in charitable work. I am especially passionate about raising awareness and funds for Eagles Autism Foundation to help support autism research and care.

So we have to ask, did you watch Cheer on Netflix yet?!
I haven’t had the opportunity to watch Cheer yet. However, from a few articles that I read about the show, I appreciate that it highlights the hard work, talent, and commitment that is involved with being a cheerleader. I am looking forward to watching the show.

We’re rooting for you, Kyle! Err, cheering for you.