After a Heart Attack, This Bucks County Woman Hugged Her Way Across America

Edie Weinstein hugged (and walked) her way back to heart health. Here's why she wants you to squeeze someone every day. 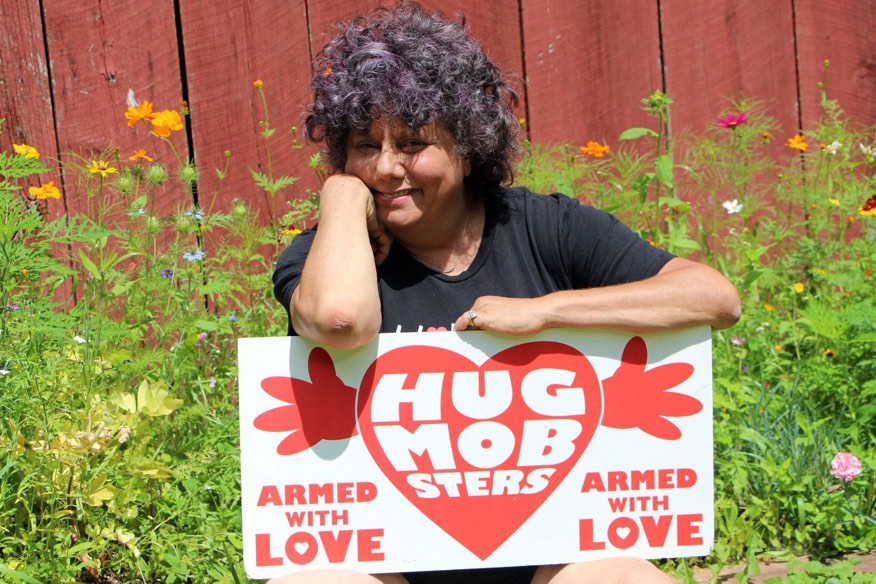 Would you hug a random stranger? Probably not if you could help it, right?

Well, one day in 2014, local writer and speaker Edie Weinstein traveled to 30th Street Station with a group of 12 friends to do just that. They were participating in a “free hugs flash mob.” While they were there, Weinstein and company spent an hour asking to hug — and subsequently hugging — what turned out to be a few hundred strangers filtering through 30th that day.

She and her pals were inspired by the Free Hugs Campaign, a movement that originated in Australia in 2004. It was the local group’s first time trying it out, and they absolutely loved it. Through that experience, Weinstein felt pure joy.

A few months later, while driving back from the gym, she suffered a heart attack. She’d been working long hours, stressing a lot, and sleeping little. (Sound familiar, anybody?) It was a terrifying wake-up call — but she survived. Her doctor told her to go on walks as a part of her cardiac rehab, but the recovery was slow.

“It felt like I could only take one step at a time,” she says. But then, she remembered something she had done just four months ago — where she had felt completely uplifted. She remembered how happy and joyful she felt at the hug flash mob at 30th Street Station, and came to the realization that maybe hugging people could minimize the pain that she was experiencing.

(Want to read about more of our area’s do-gooders? Check out our story on the local psychologists helping runners finish marathons.)

She started scheduling an hour or two of walking — and embracing along the way. It worked like a charm. “When I hug people, I feel like I’m exchanging energy with them,” Weinstein says, “Hugs are life-saving physically and psychologically. People feel important when you’re hugging them.”

It might sound pretty fluffy, but her assessment is actually scientifically accurate — a 2018 study from Carnegie Mellon found that a (consensual) hug on a bad day will legit help counteract negative feelings you may be experiencing — and another of their studies found they can prevent stress-induced sickness and colds. These findings held true for all genders and ages. 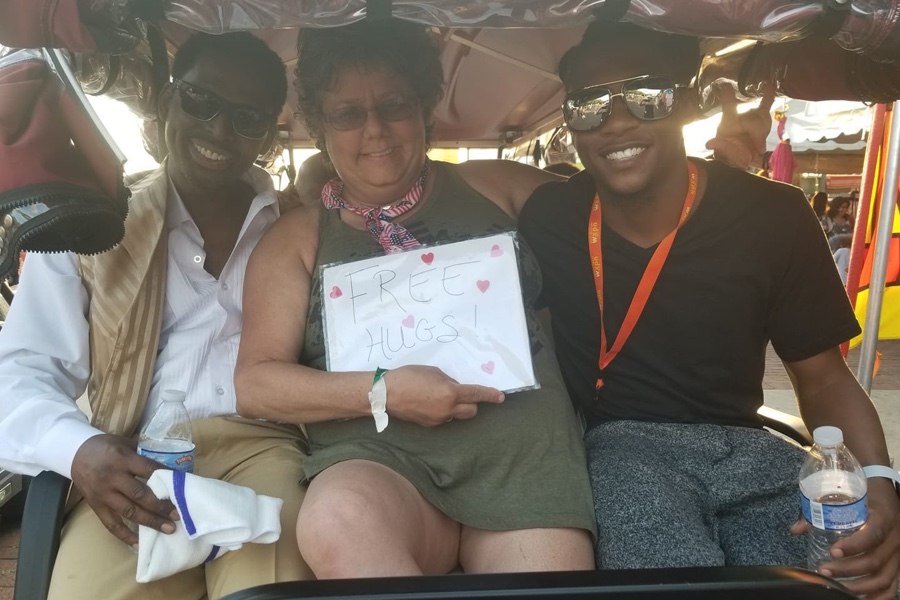 Weinstein doubled down on her idea, and brought more of her friends into the fold, forming a coalition of local huggers called the “Hug Mobsters” (LOL.) Their tagline? “armed with love.”

Since then, Weinstein as walked and hugged her way across the country — through Alabama, Washington D.C. New York City, Portland, Oregon, Ireland and of course, all over Philly. She’s been gaining fame for her message, and featured as a writer and a subject in outlets from The Good Men Project to the Inky recently.

According to Weinstein, being embraced is a simple experience that most people take for granted, as there are individuals that don’t feel much affection from others. She sees this movement as a way to bring people together. “I’ve had people cry when we hug,” says Weinstein, “because they haven’t experienced that kind of touch in a long time.”

And, she and her crew are respectful of those who don’t want to be touched, too: “When people say no, I don’t take it personally,” she says, “People don’t want to hug strangers for many reasons. Some are touch averse, some abuse survivors. I have people in my own life who are affectionate but only with those they are close to. I actually notice people in Philly being open to it in general. It is, after all ‘The City of Brotherly Love and Sisterly Affection.'” 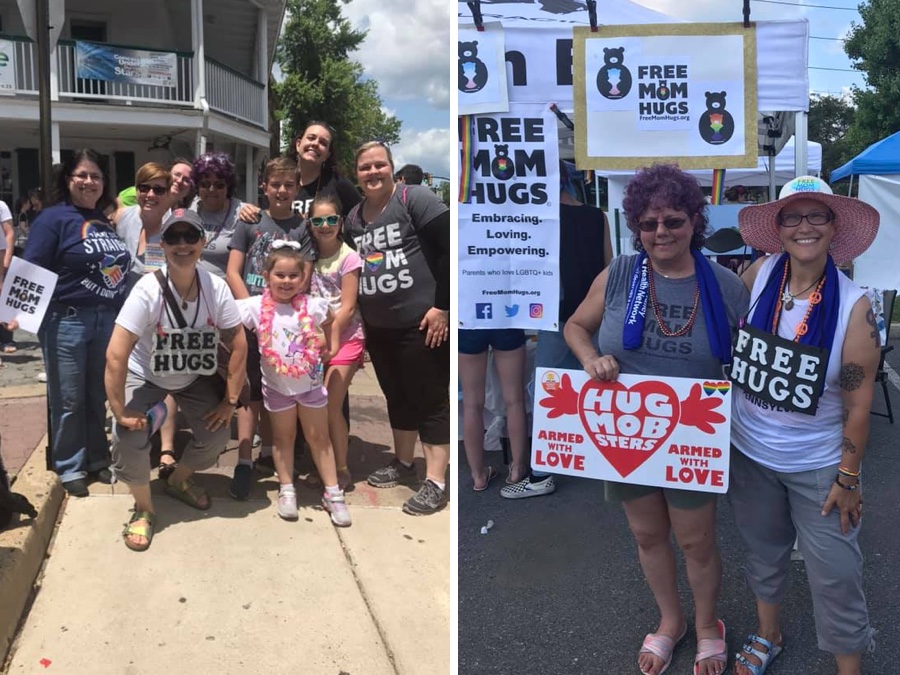 Her most recent foray was a Free Hugs stroll in Doylestown just last week. “I walked around town with my sign and offered hugs for about two hours,” said Weinstein, “Many said yes — around 40 to 50 people — and a few said no. I thanked them and encourage them to hug someone. I also offer the alternative of high fives, handshakes or fist bumps.”

By the way, all this immunity-boosting walking and hugging (up to two hours at a time) was by no means the only treatment for her after her heart attack. In addition, to her hugging routine, Weinstein works out at the gym three to four times a week — and she made other big lifestyle changes, too.

“I’m a recovering Type-A workaholic,” explains Weinstein, “Before my heart attack, I slept maybe five or six hours a night and worked 12 to 14 hours a day. Now, I sleep seven to nine hours a night. I practice boundary setting. I say ‘No’ more often.” I take cardiac meds and I eat more healthfully. I spend time with friends and family. I speak kindly to myself. I celebrate each day fully. And, I dye my hair purple every few months. How many 61-year-olds do you know who rock purple hair?”

In addition to her newfound regimen of actually sleeping, working less, and rocking purple hair (#goals) — all that embracing has helped her become stronger through helping others: “I want to get it out there in the world,” Weinstein says. “Without a nurturing touch, we can’t thrive. I’ve seen the beauty and the magic that happens when people feel like they are important — that they matter.”

And yep — sometimes just one squeeze is all it takes for people to feel like they matter — at least for a few seconds.

Interested in joining Weinstein, or catching her at an event? (Or giving her a hug?!) Catch her most often around Doylestown, New Hope, and South Street. And, you can hop on her “Holiday Hug Stroll” at the Love Sculpture coming up on December 7th. Or, to honor her cause, just give your friends and fam (or consenting coworkers, workout pals, neighbors) a hug today.