We talked with Bon Ku, the director of the Health Design Lab at Jefferson and a featured physician on TBS' Chasing the Cure, about how crowdsourcing is changing the game for health care. 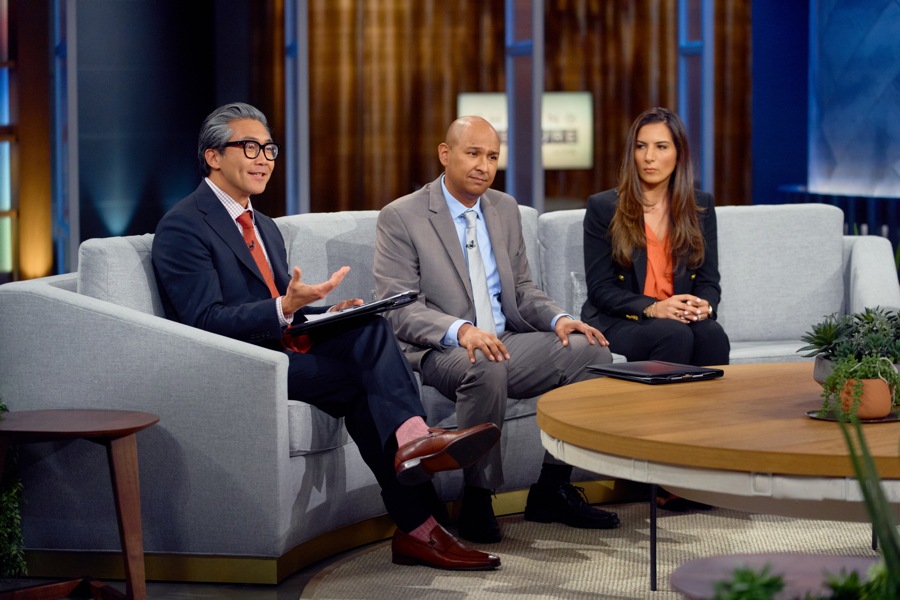 Bon Ku (left) is a featured physician on Chasing the Cure, a show that crowdsources leads from social media and expert doctors to diagnose patients with rare diseases. / Photograph by Terence Patrick/TNT

When you are sick, you are supposed to get better. That’s the way society operates — being ill is a temporary state, and if you pop some pills or dutifully go to physical therapy twice a week for a month, your brain fog will clear or you’ll stop being in so much pain, and everything will go back to normal.

But what if extreme symptoms, like debilitating pain or excessive bloating or gradual vocal loss, are your normal? What if you’ve seen so many specialists that your paycheck mainly goes toward office visits and scans and tests? What if you’ve struggled to graduate from college or hold down a steady job because your life seems irreparably controlled by a disorder that no one can name?

That’s been the reality for many of the estimated 25 to 30 million Americans living with a rare disease. Their conditions are so uncommon — the United States deems a disease rare if fewer than 200,000 patients are affected by it — that it takes years to simply figure out what illness they’re dealing with, let alone manage it.

But determining which bewildering disease you have has become a bit easier, thanks, in part to the rise of social media and other communication technology. The idea of using crowdsourcing to diagnose medical conditions has become particularly common in the last few years, with websites like CrowdMed and, now, shows such as Diagnosis on Netflix and Chasing the Cure on TNT/TBS gaining traction. In each instance, both the general public and physicians weigh in, providing a large dataset of potential leads that would be impossible to gather as quickly if the patient was confined to the limitations of one hospital network.

To see how a diagnosis is actually reached, we chatted with Bon Ku — an emergency medicine doctor, the director of the Health Design Lab at Jefferson, and a featured physician on the first season of Chasing the Cure — who talked to us about how the power of the crowd is changing healthcare forever.

Philly mag: How did you get involved with Chasing the Cure? Why was it important to you to participate?

Ku: They contacted me. I am not a rare disease expert or specialist; I run a lab at Jefferson that applies design principles to healthcare and focuses on understanding the patient perspective. I’m going to get the patient story and communicative that effectively — and understand the human behind the disease. I think that’s maybe why they chose me.

The thought of going on live TV was a little bit terrifying, but it was the vision that the producers and [journalist and host] Ann Curry had for the show [that sold me]. This is a new type of medical series that is really trying to help patients with some of the hardest diagnoses that I’ve seen in my career. Many of these patients have seen specialist after specialist. We are in this interesting time where I think the traditional way of delivering healthcare is blowing up. There’s an opportunity here for us to democratize data, to allow patients to have more ownership of their data and share their stories. I think we’re going to be seeing more of that in healthcare. It’s not replacing the healthcare system. I still work in an emergency room; we need doctors seeing physical patients in clinics and hospitals. But it amplifies the work we’re doing.

Seems like crowdsourcing is having a moment for medical conditions – why now? We’ve had this technology for a while, right?

Healthcare has traditionally lagged 10 years behind other industries. Like getting electronic health records — that technology we had decades ago. The banking industry had it long before us. Things move slower in healthcare because it’s such a complex industry. The fact that I still have to use a fax machine at the hospital is ridiculous. But it’s because the data is siloed.

I think what is interesting about crowdsourcing is that we use crowdsourcing all the time in a consumer space. I use the analogy of going to a restaurant. If I go to the Yelp app, I can find so much data about the restaurant I might go to — what the chef is like, what’s been on the menu, hundreds or even thousands of reviews. I can get more data about a restaurant than I can about a doctor who wants to do brain surgery on me. But if the crowd is going and giving their opinions or assessments about restaurants, why can’t we use something like that for healthcare? Doctors aren’t the only experts in the healthcare space. Patients themselves are experts. Caregivers are experts. Those who have been suffering chronically for decades are experts of their own disease. They may know a lot more about their disease than a doctor who specializes in that.

Why is crowdsourcing so powerful for medical conditions? Is it any more effective than putting, say, 10 doctors in a room?

I think the most effective thing is to have 10 doctors in a room and the crowd. We connect with our own network of doctors — sometimes we’re getting input from a dozen — but we also get input from the crowd. And yes, some of the suggestions they make are absolutely wrong. There’s a whole team that fields all of the comments that come through Twitter and Facebook and through the website. They eliminate those ones that are far less valid. But some of them are good. I think we’re still trying to figure it out — I’m not going to pretend we have the answer. A show like this is very ambitious in trying to get information from the crowd, but this new way of doing things is where we’re headed — technology like big data and predictive analytics and artificial intelligence that are trying to look at healthcare in a different way and give us more data points.

So how does the process work once a patient is on the show?

We have a whole behind-the-scenes team of a dozen people working on each case. The mission instilled in the show is patients first. That’s our motivation for everything. We actually follow them after they come on. Not everyone has been diagnosed yet. I forget what the last numbers are — I think it’s six at least [who have diagnoses]. On average for a patient to get a diagnosis for a rare disease, it takes five years. The fact that we have a few wins already is remarkable.

But getting a diagnosis is just one stop on the journey. It’s also about connecting patients to the right type of doctors and care. We’ve found so many gaps in our healthcare system — patents who have had to travel hundreds of miles to see a doctor, patients who can’t afford to see the right type of specialist. That’s why sometimes we get them to see a specialist for free. In Quendella’s case, for instance, she needed tens of thousands of dental care, and there was a dental surgeon who was willing to go and provide her free care. Another patient, Shannon, who has necrosis of her jaw, has a doctor in Florida near where she lives who’s providing her free hyperbaric and therapy treatment. We don’t want to promise anything, but we’re secretly working to make sure we’re helping them out on the next stage of their journey.

Do you have a favorite case so far?

Oh, yeah. One of my favorite cases was a recent one, a kid named Alex who’s 20 years old. Alex was misdiagnosed or, I would say, kind of diagnosed. He had constant muscle aches and fatigue that got so bad he had to drop out of college. He was diagnosed with everything from lupus to another autoimmune disease. At one point, he was taking up to 22 pills a day for symptoms.

We had a suspicion that he had something called AMPS — amplified musculoskeletal pain syndrome, an abnormal short circuit in your spinal cord that causes pain out of proportion. He happened to live in the New York area, and there’s an AMPS expert here at CHOP named Dr. [David] Sherry, who’s the country’s leading expert on [the disorder]. We connected Alex to Dr. Sherry, and he spent two hours with Alex. He told him, ‘Listen, you have this syndrome called AMPS. You don’t need to be on all those powerful immunosuppressant drugs. Treatment for this is actually doing physical therapy and cycle therapy. You’re going to get better.’ He’d been suffering for four to five years with this pain, and now there was such hope. He was actually happy to get this diagnosis, a diagnosis that had better outcomes than some of these other diagnoses like lupus. It was so heartwarming because we were able to help him out while he was still young.

What’s been the most surprising aspect of the show for you?

What’s been fascinating that I did not anticipate before is that patients are also connecting to each other. There were two sisters who were diagnosed with hereditary angioedema, a rare allergic disorder, from South Carolina. A woman who lived close to them, who also has this condition, connected with them and they formed this community. I thought that was wonderful and special. Every week, we get messages of hope from patients who have been diagnosed with similar conditions. That’s such a positive and amazing aspect of the crowd because disease isolates people and especially if you don’t know what’s going on, sometimes patients aren’t validated. Patients feel lonely because there’s no one else like them that’s suffering in the same way. I would say every patient we’ve had has felt less lonely because their symptoms have been validated, and their stories have been told.

You can watch Chasing the Cure at 9 p.m. Thursdays on TBS and TNT.