What We Can All Learn From the Fat Sex Therapist

Radical therapist Sonalee Rashatwar is changing minds and healing trauma on Instagram and at her West Philadelphia practice. 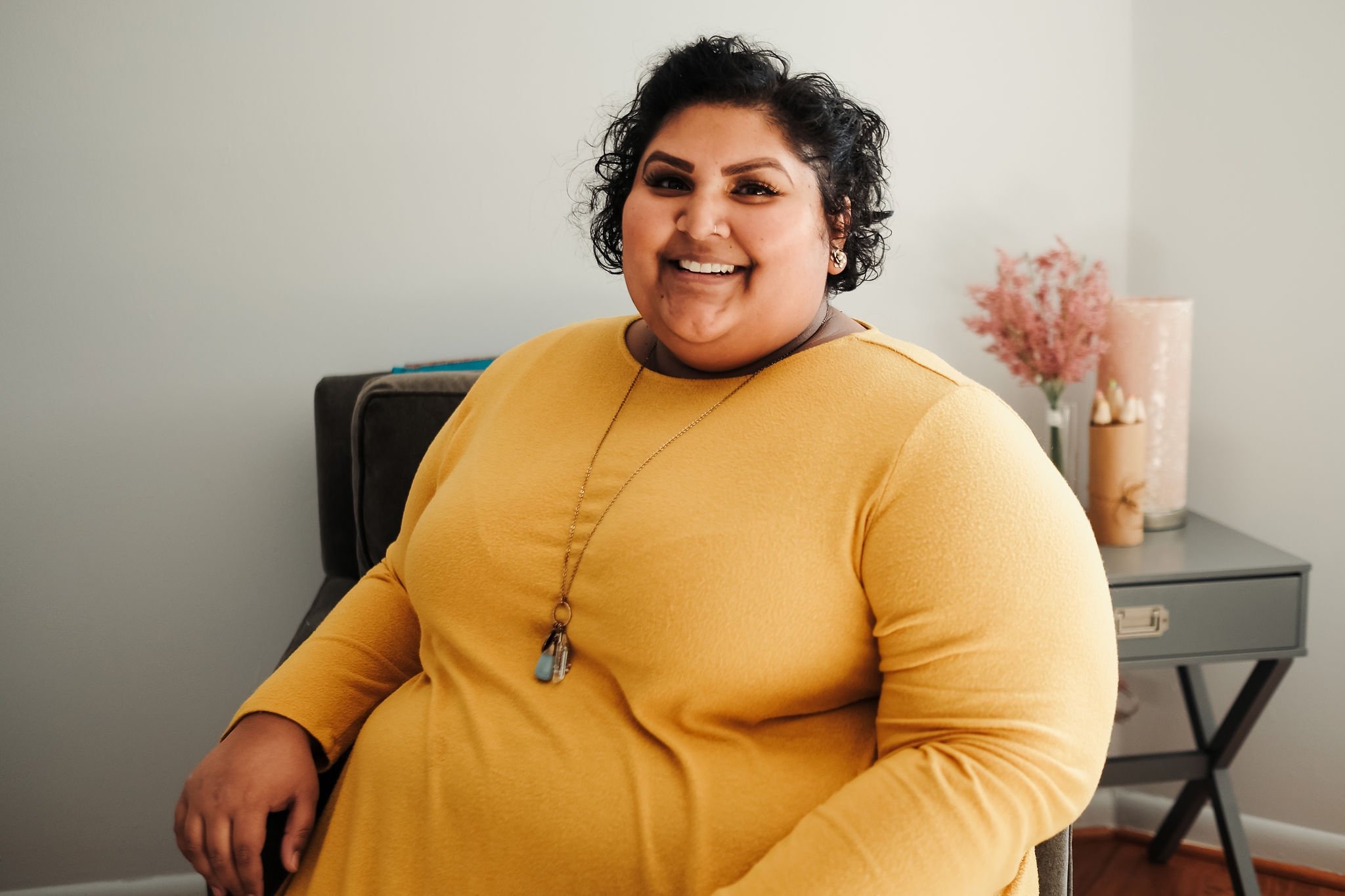 There is no superfood that will cure your ableist fear of disability.

You don’t have to be thin to be androgynous or nonbinary.

Rashatwar’s own experiences as a queer, nonbinary fat person who grew up in a South Asian immigrant household already made her an authority on navigating the world with multiple identities. Her Master of Social Work and Master of Education in Human Sexuality gave her the tools to pursue her calling.

Since not everyone can get a degree in why fatphobia persists, however, we figured we could at least come up with some of the basic principles that might be on a syllabus. Here are some of those bullet points, courtesy of Rashatwar.

While Rashatwar’s memes and teachings have been spread far and wide on social media, the key to understanding her work is understanding that she creates with her community in mind.

“I imagine my audience is going to be fat, queer folks of color who are trying to understand how to unlearn diet culture and the pressure to attain a very thin body ideal,” says Rashatwar. “They’re not just folks who already fit in the mainstream narrative — thin, conventionally attractive, white, able-bodied, documented non-immigrants, for example.”

Still, that messaging is reaching and having an effect on the mainstream, educating those unfamiliar with the issues and identities Rashatwar centers and speaks to. “Many of my DMs are from thin white women, who either didn’t know about a political issue I posted or have felt a radical shift in how they relate to their own bodies because of this messaging,” she says. “So it sounds like some of these messages are applying to a much wider audience.”

A key lesson that Rashatwar seeks to teach her clients is “how to live within the structure of fatphobia,” she says. “Fatphobia is not a single event. If I went to the gym and someone fat shamed me or body shamed me, that was an event. But fatphobia is a structure, a scaffolding.”

In addition to close-up instances of fatphobia that we may have internalized about our bodies, or microaggressions from friends, the idea that being fat is wrong, shameful, disgusting, and something to be feared is communicated all around us: in the media, in fashion, by doctors, in health policy, and by the diet industry.

Illuminating the structure of fatphobia “helps my clients understand how they’ve internalized it and the way that they’re relating to their own bodies with an external fatphobic understanding of body worth,” Rashatwar says. Understanding that the pain, negativity, and oppression of fatphobia is an external, intentional force can be the first step to clients healing that trauma for themselves.

At the same time, those struggling to exist in a fatphobic world are increasingly pressured by messaging from another angle: body positivity, which encourages all people to feel good about their bodies (many argue that body positivity is simply a watered-down version of fat acceptance that contributes to fat erasure).

“Body positivity and the wellness industry in general are not fields that I associate with,” Rashatwar says. “I don’t think of myself as body positive. I’m much more radical than that. I’m not here for self love. If that’s what we accomplish on the way that’s fucking awesome.”

But processing a lifetime of trauma from fatphobia into positive feelings about the body isn’t like flicking a switch — it’s a tall order and one that involves a lot of emotional labor on the part of the person. For many anti-diet practitioners and their patients, achieving what’s called body neutrality is the goal.

It’s a state of “body ambivalence,” Rashatwar says, that allows us to free up “all of this brain space taken up by food, monitoring what we look like walking by a window in Center City, counting calories” to focus on other things. “Can we just not have to feel tormented by the constant manipulation and self scrutiny that we feel pressured by under fatphobia?”

IV. We can create positivity by prioritizing relationships with our friends and ourselves over romantic relationships.

For those wanting more positivity in their lives, Rashatwar suggests “romancing ourselves,” citing her friend and fat studies scholar Caleb Luna, author of Body Sovereignty: Fat Politics and the Fight for Human Rights. “In queer spaces, we are often unlearning this idea that compulsory heterosexuality teaches us, that hierarchy that puts romantic love over platonic love,” she says.

“What Caleb talks about is that in queer spaces, we often see a flattening of that hierarchy and a wholesale valuation of platonic as the same value as romantic love…when we do that, we get to say to ourselves and admit that many folks don’t have access to romantic love. That’s how we talk about desirability politics — how fat, queer, sociopolitically considered ‘ugly’ people don’t have access to this type of romantic love…What they taught me is that the same ways I love my lovers, I can love my friends, and I can love myself.”

That could mean taking the time to cook yourself a luxurious dinner that you might normally save for a visit from a friend or spending quality time with yourself. “The kind of love we would use for others,” she says, “we can use for ourselves, too.”

V. Fatphobia is rooted in ableism and white supremacy.

It’s sometimes said that fatphobia is the last acceptable form of discrimination, but that’s not true, Rashatwar says, referencing a post on the @yrfatfriend Instagram account, as antiblackness, classism, and others are still widely prevalent.

“We get to intersect all of those conversations when we talk about ableism,” Rashatwar says. “Ableism creates a hierarchy of which bodies are considered most and least valuable — the ones on the least valuable end are considered disposable. Ableism is a word than connects all of those issues…We can’t abolish fatphobia without also abolishing ableism. If we’re going to make space in public to accommodate fat bodies, why wouldn’t we make them accessible to folks in wheelchairs or who need scent-free spaces? We can’t just make more space for one type of body and not others.”

Without addressing all of these forms of oppression, Rashatwar believes, we will never be able to end fatphobia. That’s why she takes this holistic, intersectional approach to addressing the effect of this trauma on fat bodies in her work.

VI. We can’t abolish fatphobia without abolishing the other supremacisms, too.

“Fatphobia is tied to so many other supremacisms. The only way we can get rid of one is to get rid of all of them,” she says. Referencing Sabrina Strings’ Fearing the Black Body, Rashatwar traces the origins of fatphobia to white European colonizers in West Africa, who justified and enforced the subjugation of Africans by the supposed superiority of white skin, thinner bodies, and how the food they ate affected their “temperament.”

“They would make arbitrary distinctions: We eat this kind of food and this keeps us thin, they eat this and this makes them fat. They would make suppositions about the way food impacted their temperament — they are lazy, we are smart,” she says. “Any time we’re talking about the demonization of fat people, we’re talking about demonization of the food fat people eat.”

Rashatwar links the white supremacist origins of fatphobia to current-day policies like Philly’s soda tax. “It’s an example of how the solution to a structural problem is rested on the backs of those considered disposable by society — poor, fat black people here in Philly, that’s who’s assumed is drinking sugary drinks,” she says, noting that the longtime demonization of sugar comes directly from fatphobia. “That is who pays the price.”

Follow Sonalee Rashatwar @thefatsextherapist on Instagram. Book a consult at the Radical Therapy Center here. For an introduction to fat acceptance, she recommends Sonia Renee Taylor’s The Body Is Not an Apology and You Have the Right to Remain Fat by Virgie Tovar.